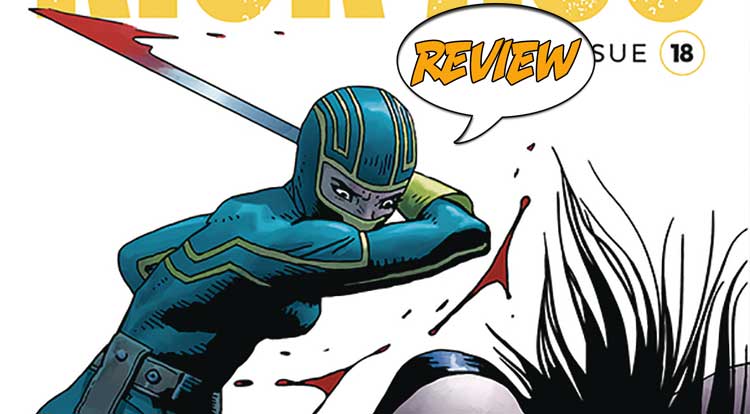 It’s Kick-Ass versus a deadly assassin… but is she dead already?  Your Major Spoilers review of Kick-Ass #18 awaits! Previously in Kick-Ass:  The Brothers are dead.  The remaining Russian goons are fleeing.  Albuquerquer is all but under Patience’s control.  She’s brought the local drug tracde to a halt and donated hundreds of thousands of dollars to charity.  Of course, there’s still the matter of her ex-husband suing for custody and the Cortez Cartel who wants reveng on her, so Kick-Ass can’t stop fighting now.

“IF ANYTHING EVER HAPPENED TO ME…”

Patience opens the issue counting her successes and failures, but as she gets out of bed, she realizes that she doesn’t actually have child care sorted out, and there’s business to be done (in costume.)  Thankfully, her friend Coop arrives to apologize (I’ve read the last three issues to figure out what, and I can’t find it) only to get roped into babysitting her kids for the day. For her part, Kick-Ass has put out the word that she’s looking for backup, which ends up pulling in a couple dozen people , but her announcement that there’s an assassin gunning for her cuts that support team in half.  Worse still, her frenemy Maurice has sold her out, meaning that her mission is cut short, and she gets ambushed at her storage unit, which is now completely empty of the cash she stashed there.  The Assassin attacks while she’s distracted and gets the upper hand, pulling a gun and preparing to kill Kick-Ass once and for all…

…until one of her dying friends shoots her, allowing Patience to brutally (and graphically on-panel) chop her head in half.  She then finds Maurice in his hospital room, murdering him in cold blood.  As the issue ends, the news that Kick-Ass has returned goes national, leading to the final page reveal of an old friend: Hit-Girl, who realizes it’s time to go to Albuquerque.

IN CASE YOU MISSED IT, THIS AIN’T DAVE

I hadn’t been following the adventures of Kick-Ass for awhile, but I was one of the people that read the original book off the stands back in 2008.  I mention that here not to try and show off my comic book bonafides, but to make it clear that I don’t necessarily have a problem with a story that’s gory and brash and unapologetic.  But I do have a problem with this issue, in part because of how much gets stuffed into these pages and just sort of blown off.  The litany of problems that Patience faces gets thrown immediately aside, and even the queston of her kids is sort of glossed over on the way to the big showdown.  I like the battle sequence, especially Frusin’s blocking of the battle and the way that it undermines a lot of action-movie cliches.  It’s nice to see a bad guy not play fair, and seeing the assassin drawn a gun on Kick-Ass rather than finish her with a sword is an interesting moment  But man, I cannot get past how unnecessary and gross the end of the fight is.  Seeing a *skull* bisected with a katana graphically is just too much for me, and what’s worse, it undermines all the “realism” created by the previous parts of the issue.

BOTTOM LINE: BRUTAL AND GORY AND NOT ENTIRELY SUCCESSFUL

There’s something intensely likeable about Marcelo Frusin’s art, and the idea of a single mom trying to balance her education and parenting with the life of a bloodthirsty vigilante is a compelling one.  Sadly, Kick-Ass #11 feels disbalance for me, with the extreme violence (and maybe the fact that Patience just flat-out kills a man in a bed, notwithstanding her skewering of a woman who was actively trying to kill her) and the glossing over of some important story elements overpowering the interesting concepts, but strong art and the promise of a Hit-Girl return help somewhat, leaving the issue with a right-down-the-middle 2.5 out of 5 stars overall.  It’s not a bad comic book, but it’s one that just doesn’t quite stick the landing, and what’s more, trips over its own central premise more than once.

I get the appeal of blood and gore and gritty drama, but this issue doesn't quite nail it, coming across as unnecessarily violent and unmotivated.