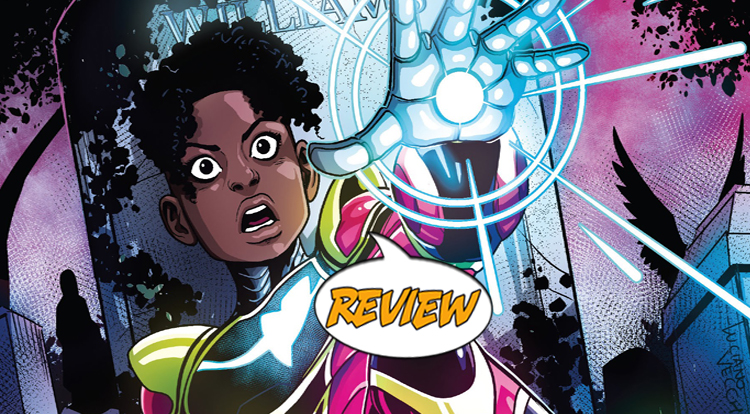 The truth behind the Ten Rings is revealed and it will change Ironheart’s life forever.  Your Major Spoilers review of Ironheart #11 awaits! Previously in Ironheart:  Finally, Riri, Shuri, and Silhouette have made it to the Wellspring of Power.  But they find themselves confronting the full force of the Ten Rings, and for Riri, the identity of one Ten Rings member hits a little too close to home.

This issue opens with a flashback to Riri’s childhood, as she tries to find the welding goggles that her mother hid from her and instead finds a boxful of photos… of her birth father.  Not only was he lost to her in a robbery (though mom’s dialogue is just ambiguous enough to make me wonder if he actually died or was just “gone”), but she was named for him: Demetrius.  In the present, Silhouette (formerly of the New Warriors and who should be in the Avengers by now, dangit!) informs Riri and her squad that she’s almost certain that one of the villains trying to channel the energies of the Wellspring of Power is her “late” dad.  Shuri suggests that it’s sorcery, Sil reminds them that her own mother facked her own death, but it’s Okoye who has the answer: Send Sil in with one of Shuri’s remote cameras to let Ironheart see for herself.  The realization that it IS her father sends Ironheart into a tailspin, but the attack of the would-be power brokers forces her to put on her helmet and fight.  Midnight’s Fire, Silhouette’s brother brings the pain, and we discover that another of the mysterious hooded folk is Tomoe, whom Ironheart faced previously, but when Papa Williams (codename: Dune, with the powers of an earth-bender) attacks, Ironheart confronts him with the truth, removing her mask and introducing him to his now-grown daughter.

I *LOVE* THAT SILHOUETTE IS BACK

The use of Silhouette as an elder statesman hero is much appreciate for me, since she dates back to 1990 and almost never got used after the end of New Warriors volume one.  The balance of this unofficial super-team is perfect, with Shuri and Riri being impulsive young geniuses, Okoye being the rational warrior and Silhouette balancing it all out as the leader.  Most interesting to me, the identities of many of the hooded members of the Ten Rings are still secret, which gives us something to build on when this book relaunches after the latest crossover schmaggegi.  Vecchio’s artwork is perfectly wonderful here, reminding me a bit of Humberto Ramos in the liveliness of the expressions with a more traditional take on anatomy that is more pleasing to me than Ramos’ work.  The combat sequences within the temple make great use of the space and the look on Dune’s face when his daughter unmasks in front of him is truly amazing draftsmanship.  It’s a lovely issue and a truly interesting plot.

BOTTOM LINE: BUILDING UP TO THE BIG FINALE

In short, Ewing and Vecchio have given us another stellar chapter in the adventures of Ironheart, with twists and turns and perfect use of some carefully chosen guest-stars to make it memorable, meaning that Ironheart #11 is another winner, earning 4 out of 5 stars overall.  If you’re looking for a book that captures the tone and spirit of books like New Warriors or Tim Drake’s Robin solo book or heck, even the 80s adventures of Spider-Man, Ironheart may be the smart, likeable, impulsive hero you’ve been looking for

The theme of fathers is a meaningful one, the adventure is exciting and suspenseful, and the art is full of life. Add in Silhouette and you've got yourself a winner.