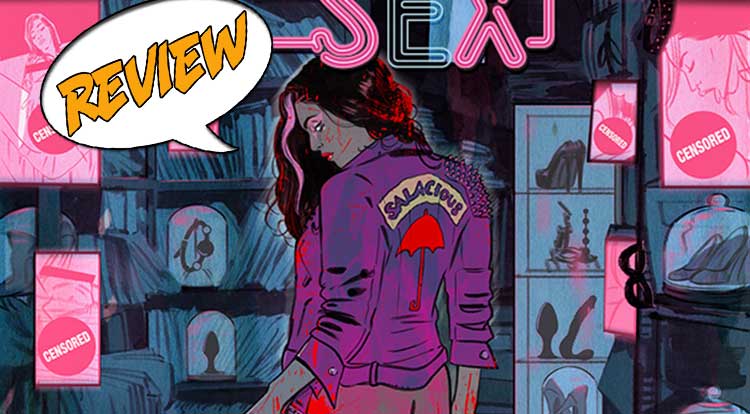 In an American where all sex acts have to be sanctioned by the government, an enclave of freedom and sexual liberation exists in a secret club called the Dirty Mind.  With her husband a prisoner of the government re-education facility, the Pleasure Center, former pornographer Avory seeks help from her erstwhile comrades.  Can she liberate George and the rest of America?  Find out in our Major Spoilers review of SFSX #2 from Image Comics. Previously in SFSX:  With the new Puritans (again) running America, sexual freedom and experimentation now need a governmental seal of approval.  Only in the secret sex club Dirty Mind can Californians seek release for their own perverted desires, operating under the radar of the fun police in the Pleasure Centre.  Pornographer Avory, who abandoned her friends at Dirty Mind to settle down with relatively straitlaced George, now seeks to liberate him from the headshrinkers ruining sex one perversion at a time in the Pleasure Centre.

WHEN I THINK ABOUT YOU I…

Kink queen Tina Horn turns away from her columns and advice podcast to try her hand at comics.  SFSX #2 is the second installment of her examination of an America where the bureaucracy has a chokehold on sexual freedom and experimentation, as depicted in a striking cover by Tuta Lotay, which displays all manner of sexual acts covered in censored stickers.

It’s always puzzled and amused me that America on the one hand can have the biggest pornographic industry in the world, rubbing up none to gently with a high level of religiosity which militates against all that freedom and experimentation.  Horn shows an America where the balance has tipped decisively to the moral Puritans who argue that too much freedom has created too much confusion and pain.  Only through cracking down on sexual liberality, and putting in its place an oppressive regime that stifles free expression, can man find true freedom.  Yeah, like that makes sense.

SFSX #2 is a fantastic read – an examination of the compromises people like Avory have made to fit in, against the fierce desire of characters like Sylvia to fight the power, launching a revolution from the Dirty Mind.  Horn mixes a strong polemical tirade against censorship, while also choosing to show the reasoning of the Puritans in such a positive light that a reader might find themselves nodding along before realizing the trick they are falling for.

Has the search for sexual liberation and the embrace of perversion depicted in SFSX been this entertaining?  Open the pages and find your happy ending!
Michael Dowling’s art is exemplary – there’s an element of photo-realism to the characters that is so well done the habitual stiffness of that particular form is entirely absent.  Given the seriousness of the subject, there are no outlandish elements to his artwork – everything feels relatively naturalistic, which makes scenes like George’s realisation upon awakening in the Pleasure Palace that there will be little pleasure and a whole lot of pain in his future particularly disturbing.  When a character comments that it ‘smells like a freakin’ barbeque joint in here’ you know the re-education isn’t going to be a couple of modules completed at a desk, but something far more physically damaging and permanent.  It’s the perfect blend of Horn’s hard charging writing and Dowling’s sober artwork.

There’s a strong undercurrent in SFSX #2 of sex that some readers might find disturbing or even shy away from.  While no one is having flagrant sex, the tone and imagery in certain scenes is one that demonstrates Horn isn’t going to avoid confronting the reality of sex in all its different guises.  SFSX #2 is a book that tells the reader exactly like it is – that sex in all its different forms is entirely natural and right, and that attempts to police it (aside from the legal considerations of consent etc, of course) are ultimately futile.  While there will be trying times ahead for Avory and her motley crew, in the end, SFSX #2 is a sex positive book that affirms the healthiness of an active and enjoyable sex life.

Strong themes, compelling writing and characters, and artwork that tells it as straight as does the writing, SFSX #2 is a belter of an issue that will leave you thinking hard on the implications. Both sides of the argument for and against sexual liberation are given, and if Horn’s leanings are obvious to all, at least those opposed to her views cannot say they don’t get a fair hearing.