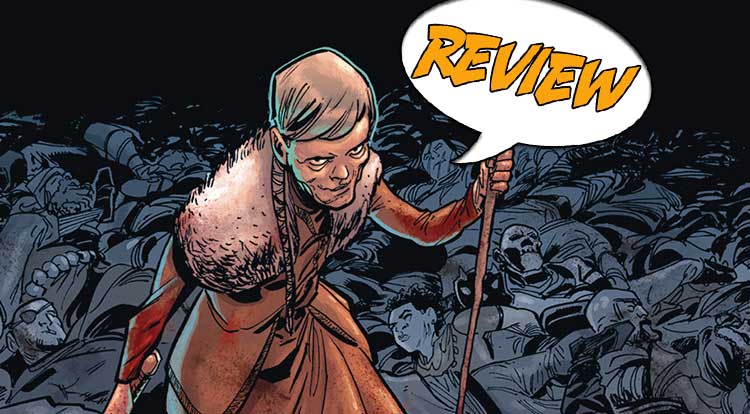 Bloody Bliss was a swordswoman beyond compare, a true legend of her time. However, what happens when time takes over? Find out in CRONE #1 from Dark Horse Comics, on store shelves November 6th. Previously in CRONE: In a land far away, in a mysterious keep, the villainous D’Kayde amassed his troops and stood fast against the most dangerous of his enemies, the swordswoman known as Bloody Bliss. That was then and this is now, and now is different. Surly you have heard the old saying which speaks of not dying, but simply fading away…

Once upon a time, deep in the mountains, there stood a great keep. Warriors now long forgotten at one time defended the keep from the unknown. Now it is the home of a dark warlord and his army of deadly soldiers. He reached out his sword arm and sent his despicable hordes across the Three Kingdoms, sowing death and destruction. He was feared by many, but only a special few dared to hunt him, those brave souls: a barbarian warrior, a rouge, and a red-haired swordmaster, finally track him down and confronted him on the steps of his very home. There the female fury and her companions met the army of darkness with blades and brawn. It was a good time.

Nevertheless, time passes and it passes differently for different people. Some settle in and surround themselves with the comforts of a life well lived, with family and friends and finally fade into the afterlife with contentment and satisfaction they had lead a life worth living. Others stand on the brink of death’s door, all the time daring it to take them, only to begin to feel dissatisfaction, as they are denied repeatedly that which they consider their true rest. On a far off mountain, covered by snow, one aged, white haired woman faces this challenge of a life hard won. When a visitor from the past comes to her with news of an enemy thought long vanquished has returned, will she ride forth again to combat it, or will she honor promises to the dead?

The Crone is a book that looks to tell a tale of high adventure and the repercussions at being to good at outliving your enemies. Created by Writer Dennis Culver (Edison Rex, Burnouts) and artist Justin Greenwood (The Fuse, Resurrection), it grabs your attention at the very start, throws you into an action packed sequence which gets you to the edge of your seat, then it shifts gears and begins to tell a different story. That may sound like an off way to describe it, but it is true. The three pages of red tinted blood and swords at the very beginning is just a tease to the true story, a little delight to pique your interest before they begin to settle in and tell the real story. As important as those three pages are, the more important are the images of an aged and white –haired Bliss standing on the edge of a cliff, lifting a foot gingerly beginning to step into oblivion, and then stopping. Despite her later admonishment, that she is not the red-haired warrior from her past, her action prove different. Culver conveys that she is a warrior still, but does not want to fade away but go out with a weapon in her hand and adrenaline in her blood. But something from her past is stopping her from doing so, and the conflicted nature of the character comes through wonderfully.

Justin Greenwood is part of the reason Culver’s story reaches you so quickly. His action sequences are wonderful, but if you look closely, you see little things that tie it all together. An older Bliss’ smirk in battle echoes the younger one as she vanquishes an enemy. Action lines and non-traditional panel lines bring the action to a frantic life, while wide shots and panoramas guide your eye through the action as much as the words.

Culver and Greenwood have done a wonderful job of flipping the idea of the aged warrior called back to battle one more time on its head. While an obvious, and possibly justified, comparison to another female blade wielder could be made, the 1992 Clint Eastwood classic “Unforgiven” comes to my mind after reading the full issue. There is a similar feel here and it makes for a great read. There are multiple threads woven into what may have been a simple tale of machismo and misplaced oaths, but Culver and Greenwood take it and massage it into something more. Bravo.

CRONE#1 reads like a love song to a bygone age, don’t let it pass you by.

Wonderfully powerful art with a beautiful sense of emotion combined with a story that draws you in.