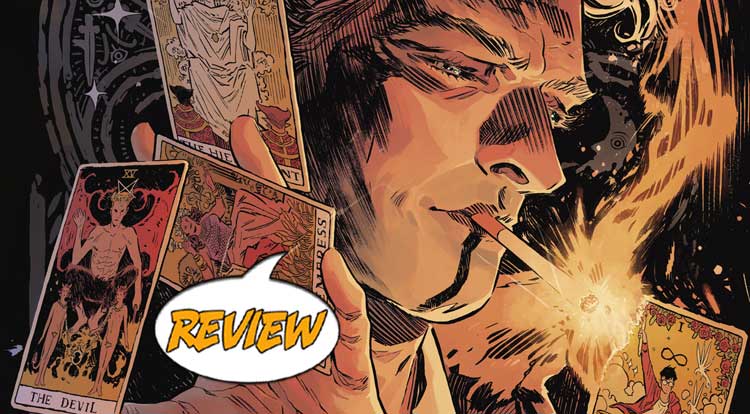 John Constantine is back, and he’s a nasty piece of work, chief… ask anybody. Your Major Spoilers review of The Sandman Universe Presents: Hellblazer #1 awaits! Previously in The Sandman Presents: Hellblazer: Somehow, Tim Hunter is back and young again. Is John Constantine here to put Tim Hunter on the right track and avert a terrible outcome? Or is he the only person in existence with the guts to do what REALLY must be done?

After all, he’s a nasty piece of work, chief…ask anybody.

“SOMETHING ATE THE SUN HALF AN HOUR AGO.”

Our story begins in a setting that old-school fans will easily recognize: An all-out magical war between order and chaos (or at least something like that), as seen in the ‘Books of Magic’ series back in 1990. There’s a lot more revealed here, including the final fates of several of DC’s mystical heroes, a horrifying evil Tim Hunter and John making the worst decision of his life (which is a really difficult proposition for someone like John.) As the battle winds down, a fatally-wounded Constantine lies bleeding out just as young Tim Hunter arrives for the OTHER side of the conversation we saw in ‘Books of Magic’. Then, we see what comes next, as an old man to make John an offer he can’t refuse: A return to health in return for the tiny price of his soul. The identity of this man is the second big shocker of the issue, which then makes the fact that his offer is true even more astonishing. Awakening in a hospital in London, 2019, John first uses hypnosis and legerdemain to escape, then goggles at the state of his beloved home-city. He seeks out Chas, his oldest mate, finding that the years have not been kind (nor have the demons) and as our story ends, he surveys a trenchcoat in a shop window, arguing whether he needs to finally walk away from a life of blood and magic and sacrifice, or whether he needs to smash the window in with a rubbish bin and get back to business.

THAT FIRST SACRIFICE HIT ME TOO HARD

Long-time readers probably won’t be surprised at his choice, but they might be surprised at how well Spurrier captures the classic Vertigo John’s voice and lifestyle. (While I appreciate the New 52 take and the idea of returning John to the main DCU, it always felt like a derivative work rather than a continuation of the man who taught Swamp Thing about the Parliament of Trees.) This Constantine is once again a man in his 40s, implicitly the one from before all the reboots, with all the bad decision-making and cursing that entails. That this story starts with him sending Chas Chandler to his death is important, showing that he’s finally gone beyond the lines he thought he’d never cross, and showing us that he really believes this to be the end. The last couple of pages of this book show that, once again, the lessons haven’t really penetrated his thick skull, as well as setting up one adversary that he might have difficulty overcoming. Marcio Takara’s art makes that moment even more disturbing, but the real beauty comes in the art’s ability to convey massive multi-dimensional wars of madness and magic, then transition to John in a sordid office, talking his way out of asylum custody. Every page of this book is beautiful, even the parts that are monstrous, and that takes some doing.

BOTTOM LINE: *NEVER* SELL YOUR SOUL, ESPECIALLY TO YOURSELF

As someone who bought Swamp Thing #36 off the stands in high school, and then proceeded to follow Hellblazer and buy every issue until its cancellation, I may be biased about the merits of John Constantine as a character. But the beauty of The Sandman Universe Presents: Hellblazer #1 is that the creators clearly share my opinions of Constantine, and are bringing their A-Game on the art and the story to make sure that this debut lives up to that, earning a well-deserved 4.5 out of 5 stars overall. I’m intrigued by what has happened her and am waiting to see John take on modern England the way he took on Thatcher in the 80s.

This is a good one, full stop.