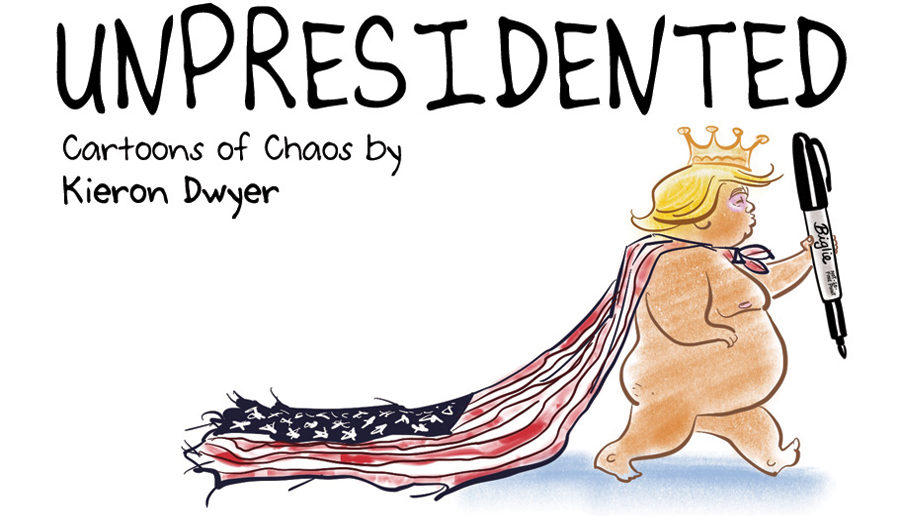 Just ahead of election season, the fan-favorite political cartoons of creator Kieron Dwyer (Last of the Independents, LCD: Lowest Common Denominator) will be collected into a hardcover titled, Unpresidented, and available from Image Comics this April 2020. Taking aim at hypocrisy, greed, stupidity and cultural chaos in the age of Trump, Unpresidented features a wide range of sharp-witted illustrations lampooning the bizarre course of American politics and culture since the fateful escalator ride of 2015.

“Even as a young kid, I’ve always been drawn to editorial and political cartoons, both in style and substance. The exaggerated and loose qualities of them appealed to me much in the same way that the work of Mort Drucker and Jack Davis did in MAD Magazine,” said Dwyer. “The economy of information in an excellent editorial cartoon is, in my opinion, the highest form of graphic storytelling. In most ways, that is what I strive for in all my illustration work: simplicity and essence, true communication. Even before my professional comics career, my first published works were the editorial cartoons I did for my high school newspapers, both the official one and the anti-establishment underground one put out by myself and several friends. I feel I’ve just been refining that storytelling craft my entire life, but events over the last few years have had a catalytic effect on me and compelled me to express my feelings in this particular medium.”

Fans of political humor and social commentary should not pass Unpresidented by.

Unpresidented (ISBN: 978-1-5343-1587-7) will be available on Wednesday, April 29 and in bookstores on Tuesday, May 5. It can be pre-ordered at your local comic book shops on Amazon, Barnes & Noble, Books-a-Million, IndieBound, and Indigo.

Unpresidented will also be available for purchase across many digital platforms, including the official Image Comics iOS app, Amazon Kindle, Apple Books, comiXology, and Google Play.
ABOUT IMAGE COMICS
Image Comics is a comic book and graphic novel publisher founded in 1992 by a collective of bestselling artists. Image has since gone on to become one of the largest comics publishers in the United States. Image currently has six individuals on the Board of Directors: Robert Kirkman, Erik Larsen, Todd McFarlane, Marc Silvestri, Jim Valentino, and Eric Stephenson. It consists of five major houses: Todd McFarlane Productions, Top Cow Productions, Shadowline Comics, Skybound Entertainment, and Image Central. Image publishes comics and graphic novels in nearly every genre, sub-genre, and style imaginable. It offers science fiction, fantasy, romance, horror, crime fiction, historical fiction, humor and more by the finest artists and writers working in the medium today. For more information, visit www.imagecomics.com.