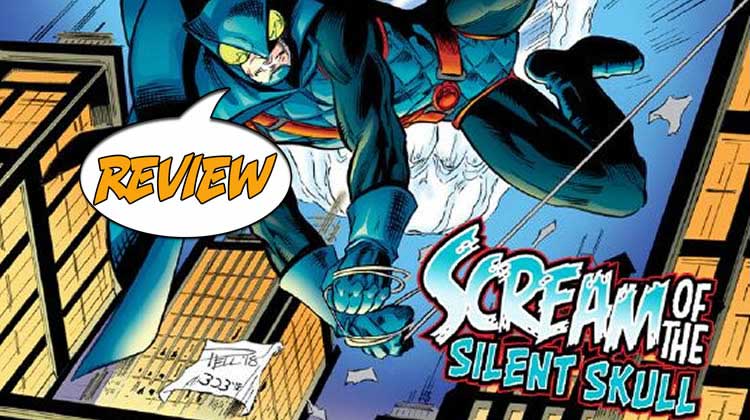 I’m going to say it right out loud! I LOVE the Black Owl! Yup, he’s already one of my very favorites when it comes to heroes! He’s “The Midknight Manhunter,” he fights odd villains, he wears a cape and has cool stuff to use (including the Owlcycle, which I already want a toy of), and just has a terrific look to him that just calls out for a new statue to add to my collection!

Christopher Mills and his teammates have been updating heroes from previous decades, making them great reads again. You can see what the Black Owl looked like before in this issue, and I have to say that he’s got a MUCH better costume these days!

Sleuth Comics is like reading the Batman books BEFORE the TV show with Adam West came along. I loved those comics, but not so much so after the ’66 Batman series began. It was action, it was adventure! You know, “buckle that swash,” “how can they possibly make it” kind of stories that just wouldn’t let go!

Well, they’re back, and then some! SOLICITATION: The nocturnal nemesis of crime known as the Black Owl protects his city of Knightsbridge from evil in all its forms! Like the city itself, the Black Owl never sleeps!

‘ADVENTURE’ IN ALL CAPITAL LETTERS

In the 1960’s, comics were all about putting heroes in extremely tough situations and seeing how they figured their way out of them. I totally admired Batman because he could solve puzzles no one else could, and I always wanted to be a detective like that. Again, that was in the comics and before Batman hit ABC, which made the books sillier than I liked.

That sense of adventure rules Sleuth Comics, and particularly the Black Owl story. I have always liked heroes based on owls, such as Owlman from Earth 3 in DC and The Owl in Gold Key, later Dynamite Comics.

I have to tell everyone that I have this thing about heroes with wings or capes. There’s something “angelic” about them that just draws me in immediately, be it Batman or the Angel in the X-Men or Hawkman or the Falcon. I’m big on that type of character.

Darren Danville is a millionaire, which I’m sure comes in handy since he can afford a penthouse lair, computers galore, and the terrific Owlcycle.

Like all good heroes, Black Owl has a nemesis, and he’s called Funnibone. Any passing resemblance to the Joker is purely coincidental, I’m sure! In the early part of this issue, the two face off, with the usual results, naturally, but not too easy!

Then our hero comes across the Silent Skull, although he isn’t silent when he screams. He does what every “caped crusader” doesn’t want to have happen—the people are mind-controlled and fight against Black Owl.

The Skull’s plan has to play out, of course, and the Black Owl has to track down the baddie and stop him—just in time, naturally! Ah, the good old days!

This book has a great supporting cast, with a diverse police commissioner named O’Neal along with a tech wizard named Athena Laskaris, who is the twin sister of his late fiancée. Since Darren has money to spare, she can develop gadgets he’ll need to catch the villains. We also meet Mike Lancer, a private eye who lends a hand in the investigation, among other things.

The pacing is quick, with information revelations coming in excellent dialogue instead of boring boxes of text. The characters are all well-developed, with their roles clearly defined for now. The action sequences are great, too, with nothing standing still too long, just like I like it!

I’ve read that Rich Burchett developed this costume, and it’s a home run for me! The cape is excellent, with some influence coming from Marvel’s villain The Owl. It makes sense and seems to hide various weapons in various places. Well done!

There are three beautiful covers you can choose from, and I liked #1A, but that’s just me!

Once again, I always judge artwork in a comic on two things: action sequences and facial expressions. If I can tell what’s going on and the artwork is visually engaging, that’s a huge plus! And this book does that tremendously! But it’s also important for faces to show what the various individuals are feeling, and I really enjoyed how the art team made them mysterious at times, but clear when we needed to know what they’re thinking or feeling. I hope we get more of this character and soon!

BOTTOM LINE: A ‘Wise’ Start for a Caped Hero!

The one thing I come away from the book wondering is, Will we see The Black Owl again? I enjoyed the suspense as well as the action, found the book’s universe understandable and fun, and could see all kinds of possibilities for future stories. In fact, there are two “Who’s Who” kind of pages that give a lot of information about what’s going on, including a list of villains the Black Owl considers enemies. But he also belongs to a group called “Centurions of Justice,” which immediately has me wanting to know more since I’m also a big team book fan.

The one thing I come away from the book wondering is, Will we see The Black Owl again? I enjoyed the suspense as well as the action, found the book’s universe understandable and fun, and could see all kinds of possibilities for future stories.