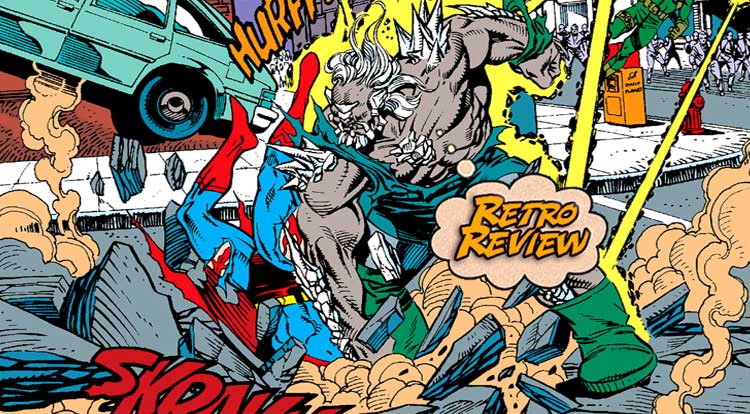 Were you there the day that Superman died?  Your Major Spoilers (Retro) Review of Superman #75 awaits!

Previously in Superman:   With the upcoming ‘Tales From The Dark Multiverse” series taking on  the Man of Steel’s demise, I thought it might be nice to remember how things actually got started, more than a quarter century ago.  Somewhere in the Midwest, a mysterious vault broke open, and a creature busted loose, slowly making his way across the country and smashing everything in sight.  After tearing through the Justice League of America like tissue paper (and ruining the character of Booster Gold for the better part of a decade, I might add), the creature found itself locked in combat with Superman.  The battle only made the creature angrier, freeing him from his restraints and forcing the Man of Steel in a desperate slugfest to slowly moved towards the city of Metropolis.  With the battle coming to his home turf, Superman is forced to go on defense. The massive full-page splash panels are part of the gimmick of ‘The Death of Superman’ crossover, as each subsequent chapter of the crossover had few panels per page, starting with six panels, then five, then four. etc.  Superman barely manages to save Lois Lane and Jimmy Olsen from the creature’s onslaught, and while the shock troops of Project Cadmus keep it occupied, he manages to steal a brief moment with his fiancée before rushing back into battle. The biggest weakness of the ‘Death of Superman’ crossover to me is the fact that it relies uopn the premise that Superman’s response to a powerful enemy is, to quote the words of one comics writer, “to turn into a mindless slugging machine.”  It’s not an unfair assessment, especially as Superman head-butts the creature at high-speed, driving it through the foundations of a skyscraper to fall on the very steps of The Daily Planet (which, as you may remember, is one of the places he’s trying to keep the creature AWAY from.)  Doomsday drives our hero head-first into the pavement like a tent spike, then turns his attentions to Jimmy and Lois, who foolishly ignored Superman’s instructions to evacuate.  This does not sit well with Superman. It’s weird how awkward the punches and poses in this issue are, especially since Dan Jurgens is known for his fluid and subtle flying and fighting poses.  I have long wondered if there was an intent to keep this fight feeling grounded and human, and so they chose to emulate non-super boxers and wrestlers in the linework.  Either way, a bruised and bleeding Man of Tomorrow manages to hurt the creature, snapping off some of the bone protrusions but making him even angrier in so doing.  Thus, we come to the fateful moment where the monster goes for a killing blow, just as Superman puts all his remaining energy into a double-fisted hammer blow. Man and monster fall, both mortally wounded (or at least, seemingly so), and we get reactions shots from Lois, from Jimmy, from Jonathan and Martha Kent watching at home in Smallville.  The Justice League arrives too late as Lois rushes to the wounded Superman’s side, cradling him in a way that is absolutely not recommended for someone who just experienced severe physical trauma, tearfully entreating him to hold on until help arrives… Superman falls in the rubble, dead, his ripped cape hanging from a nearby chunk of rubble like a memorial banner, and the once again the figure work gets… strange.  It’s not Michelangel Buonarroti’s ‘La Pieta’, but there’s a gravitas to the visual that’s very effecive and reminiscent of Renaissance art.  There’s still a lot more story to unfold (neither of the combatants are actually dead, after all) and the subsequent story may have dragged on far longer than I’d have preferred, but even readers who dislike crossovers and event comics will have to admit: This final page works.  Superman #75 is actually more of a beginning than it is an end (just ask Kon-El, Steel or Hank Henshaw), but it’s still a solid single-issue reading experience, with the over-the-top dialogue and desperate high-stakes fighty-fighty uniting to pull you in to the story, earning a better-than-average 3.5 out of 5 stars overall.  Parts of it may not hold up to scrutiny or the changing times, but it still gave me goosebumps, even 25+ years later.

Jurgens hits the right notes, and while the dialogue is melodramatic, this IS a melodrama, and one with a really effective ending.