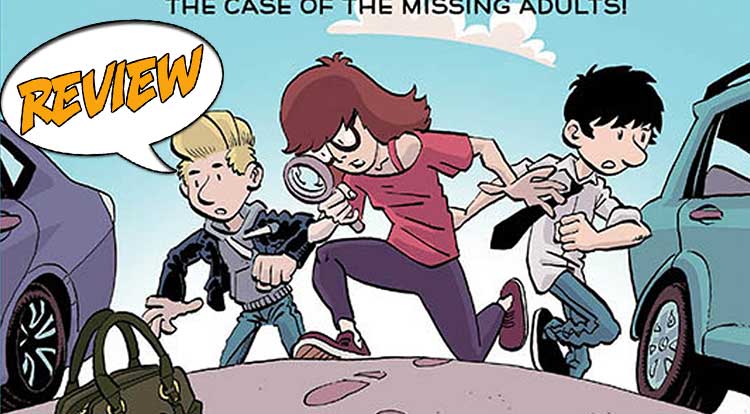 Nancy Drew and the Hardy Boys: The Case of the Missing Adults! Review

Rival high schools, a walking skeleton, unrequited love, and missing adults – what is going on? Find out in Nancy Drew and the Hardy Boys: The Case of the Missing Adults from Dynamite Entertainment. NANCY DREW AND THE HARDY BOYS: THE CASE OF THE MISSING ADULTS!

Previously in Nancy Drew and The Hardy Boys,: These young sleuths are perennial favorites. They’ve been solving mysteries for decades in books, TV shows, comic books. Now they’re brought together in a wild and wacky science fair mystery!

Nancy Drew and the Hardy Boys: The Case of the Missing Adults! is a charming graphic novel aimed at the younger set (12+). That isn’t to say that I didn’t thoroughly enjoy it – I did. Nancy Drew and the Hardy Boys are characters that are so well known, they’re almost more archetypes than characters. As such, they can be put in serious stories or funny ones with ease. In this case, Nancy Drew has just moved to Bayport, and in short order she meets Frank and Joe Hardy, who fall in love with her.

This is a cute book with a wacky mystery at the core, and it’s one that I think will appeal to the younger readers. As the title suggests, all the adults in town have gone missing. Joe Hardy is witness to a fleet of busses leaving down with the grown-ups, who all seem hypnotized. Could this have anything to do with the upcoming science fair, and their rival high school, Vansant? All our characters are high school students, but you can tell the book is aimed younger by how they’re managing. Nobody knows how to cook. Or do laundry.  Or what to do if they run out of soap. They’re good kids, so they aren’t going to take stuff from stores, but they’re surviving by whatever happens to be in the cupboard today. It does give some opportunities for laughs, though.

And chuckles certainly abound, as well as plenty of action, as the young detectives work their way through what’s been going on and solve the case.

The art really fits the story well in Nancy Drew and the Hardy Boys: The Case of the Missing Adults! Everyone is distinctive, with a modest amount of line detail giving them their pet features. The action is delightfully over the top, one of the advantages to a graphic novel. Expressions are slightly exaggerated which makes them absolutely clear. And there are so many fun touches. Part of the story involves an animated skeleton. It shows up fairly early on, and you might not realize at first that it’s animated, but when you do, it’s doing some silly poses that complement whatever is going on at the moment.

Nancy Drew and the Hardy Boys: The Case of the Missing Adults is terrific. I enjoyed it even though I am well over the target age. The pacing is good, there are a lot of laughs, and all the loose ends get tied up neatly.

Nancy Drew and the Hardy Boys