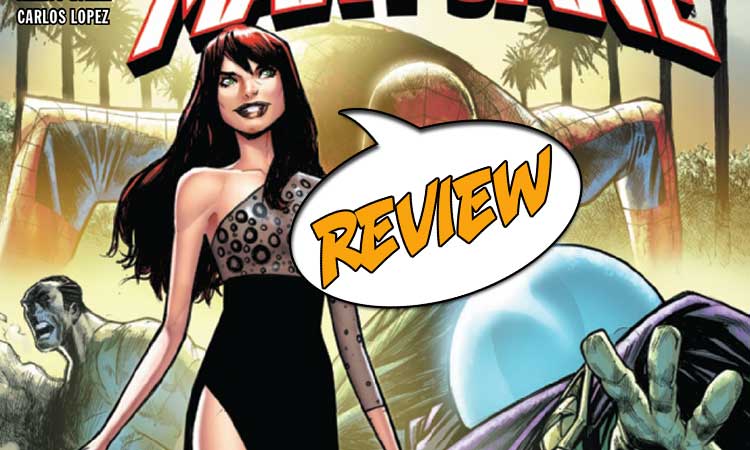 Mary-Jane Watson is ready for her big break. Assuming of course, she survives working with her new director. Your Major Spoilers review awaits. Previously in The Amazing Mary Jane: MJ has left New York and has made it all the way to Hollywood. She’s been hand picked by a famous director to be the female lead in his next major motion picture.

The Mystery of The Missing Director

Things are already underway when this issue opens up. MJ is on set and filming a scene, but is not happy with the dialog she’s been given. She sets out to find the director who is strangely, not present. She speaks with few of the workers in the studio as she tracks down the director. She finally catches up with him but he takes off running.  MJ is able to catch up and then confront him.  He reveals his secret that he’s actually Mysterio posing as a famous director in order to get a movie about his life made.  He pleads his case to MJ and she agrees to help him make his film. They stroll through the studio where he explains his plans for the movie and MJ brings up her complaints about the dialog. Later that night MJ calls Peter and they have a conversation where it’s revealed that he isn’t too thrilled about his girlfriend working on a movie about Mysterio. She reassures him that everything is fine. The issue wraps up with a shot of the recent incarnation of The Sinister Six watching a news report about the movie production and decide they’re going to take a trip to Los Angeles.

The Amazing Mary Jane #1 is not a well written book, plain and simple.  Nearly the entire issue is dedicated to MJ and Mysterio walking around talking about the movie they’re in the process of making, yet the conversation is dull and neither of them have much personality, which is strange considering that one of MJ’s big complaints about her role is how her character is written without any personality. In fact, all MJ really does in this book is act as a vehicle for some pretty basic complaints regarding female representation in the movie. Which would be fine, if there was any presence of a unique voice.  She feels more like a checklist of common problems in the film industry rather than a person that these things are actually affecting. There were some fun moments when Mysterio is pretending to be an over-the-top film director.  The best part of this issue is the conversation between MJ and Peter. The pair are written as the cutest most adorable couple ever, but it doesn’t come off as saccharin or cringy.

Mary Jane Watson making a movie with Mysterio at the helm, and she’s in on it, that sounds like a goofy good time, unfortunately it’s presented here in the dullest way possible with poorly utilized characters. If it wasn’t for the cliffhanger at the end there wouldn’t be anything in this first issue that would make me want to come back for a second issue. 2 out of 5 stars

The Amazing Mary Jane #1 spends more time establishing a fun scenario rather than actually utilizing that scenario to make a good story.