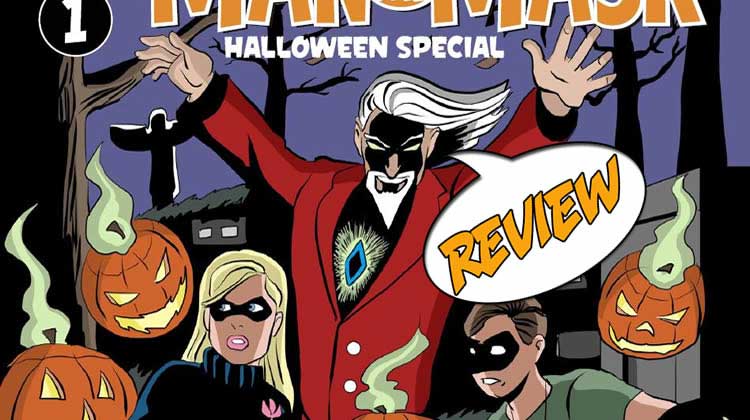 We’re entering that time of year when spooky stories about hauntings and supernatural happenings are everywhere. Personally, I enjoy it when heroes get involved because it takes them where they normally are NOT found, and that’s fun for me.

A while back, I reviewed the #1 issue of this series, and I liked it a lot.

The book’s creator has now made a Halloween story, and it’s fun, just like the rest of the series!

SOLICITATION:  Tommy Franklin is the city of Millerton’s masked man. He inherited the mask he wears from his grandfather, his Pop, who began the identity in Freebourne City in the 1950s. He’s just a regular guy who’s trying to do the right thing and help out where needed. But this story takes place before Tommy ever stepped foot on any Millerton rooftop… For those in the know, this takes place about a year before Tommy goes for his little fun run in the graphic novel EMERGING FROM THE SHADOW. And you know how that turned out!

Things start out in this special issue with the bad guys finalizing plans for All Hallow’s Eve. On the other side, we see Bianca Curry and Tommy Franklin trying to decide what to wear when they go out trick-or-treating. Bianca wants to use her Midnight Rose uniform, but that might give her identity away, says Tommy. She still wears it anyway, while Tommy wears a costume he describes this way: “How less serious can I get wearing this?” It’s got a black mask and some army stuff such as boots.

When they venture out into the night, if you look carefully, you just might see costumes of other heroes in the streets, such as Doctor Fate, The Spirit, the Lone Ranger, and some well-known monsters like the Mummy, for instance.

Suddenly, Jack O’Lanterns start attacking the kids, but Bianca puts her softball practice to work, batting the pumpkins out of the sky. That’s when someone unknown appears, wearing a dark outfit, carrying a gun, and riding a motorcycle with tires of orange flames. When asked who he is, he says he’s “a pro, and I know what to do.” Still, they follow him as he chases down the source of the magic.

When the person comes across the creepy stuff happening in the night, he asks the kids to stay out of the way (like that would ever happen). After the trio is captured by the bad guys, Bianca uses her strength to break free, and Tommy follows suit, where they make an interesting discovery about their new friend… that he’s someone well known in Halloween lore.

They battle it out in the night, but the baddie goes down, of course, and takes a special dislike to Tommy, who he claims he will return and visit on him every torture he could imagine.

It’s a fun adventure on Halloween night, with lots of good versus evil in the classic sense. It’s 24 pages of excellent storytelling that is perfect for the season!

This comic’s art is consistent with the previous issues in this series because, of course, the creator made it all! It’s clear and easily understood with good expressions and intense battle sequences taking place.

I have to give credit to the colorist who always highlights just the right elements to make the story move along well. It’s not too dark, thankfully, so we get to follow the story easily from panel to panel, and I love that! Some might have wanted darker tones, but this book is obviously “all ages,” and that means the younger readers need to be kept in mind as the pages move along.

The good news is that you don’t have to be younger to enjoy the story, since this truly is fun for young and old.

I like it when an “all ages” comic doesn’t talk down to anyone. I get bored once I see that happening! This comic, like the rest of the Man in the Mask series, doesn’t do that, and I could easily see my own Mom reading it to me back in the days when she used to do that for my brother and me. It gave me a good feeling to remember that!

I highly recommend this comic for the season, and hope you also get into the other books in the series! Great reading!

I could easily see my own Mom reading this comic to me back in the days when she used to do that for my brother and me. It gave me a good feeling to remember that!