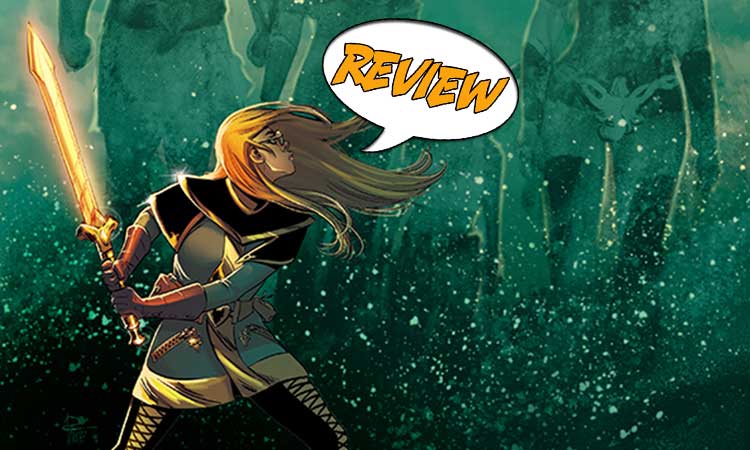 The Rat Queens have returned to Palisades intent on teaching King Gary that it’s not a good idea to mess with them, but things take a turn no one expects. To find out exactly what, you have to pick up RAT QUEENS #19 from Image Comics. Previously in RAT QUEENS: After their last adventure, the Rat Queens have returned to Palisades to find themselves at a cross roads. The Queens are starting to fall apart, and it is not looking good for the future. After they ladies hold an intervention on Betty and talk her into going sober, they wind up captives of the King of Blorevion, also known as King Gary, who has come to conquer Palisades, over the Queens dead bodies if need be. After coming to terms with the fact that GARY and his followers captured them, there is a moment of crisis, Betty is in withdrawals. Hannah uses her magic to form a “conscious” to guide Betty through her trip to sobriety, To everyone’s surprise Maddie enables them to escape captivity and the Queens go to retrieve one of their own, only to find Violet is not willing to go due to being pregnant with Dave the Orc Healer’s child. She does, however, give them a map to the most powerful weapon ever, they just have to get it. After conquering a mountain, and nearly losing their newest member, they retrieve the weapons and discover that Violet was apparently very forward thinking. Thus armed, it is time to return to Palisades and confront King Gary.

EVERY VILLAIN IS A HERO IN THEIR OWN STORY…

The Rat Queens arrive in Palisades and immediately demand that King Gary come down from his tower so they can kick his ass, and for a little while, it seems like they may. Using the gifts Violet had hidden away for them last issue, the Queens tear through Gary’s soldiers like a ton of pissed off bricks through tissue paper. But the carnage around them has a different effect on Betty. Now almost fully sober, she feels something which she can’t handle, fear. There is no time for them to comfort her though, because King Gary’s large, vicious, and extremely cute dog is now on the attack. As the newest Rat Queen, Hannah tells Maddie she has to be the one to kill it, to kill the cure monstrous dog. No one can believe she is going to do it, much less Maddie herself. Fortunately, the situation is taken out of her hands. King Gary has captured Betty and uses her as leverage to force the Queens to stand down.

In no time the Queens, minus Maddie who was once again disregarded as unimportant, are set to stand trial with King Gary holding court. Chained and placed over a glass box of boiling acid, they must stand and listen to their crimes. The people of Palisades each come forth to present their grudges… I mean evidence against the ladies. Unfortunately, when it is all taken in one fell swoop, all listened to at once, it actually is pretty damning. From defecating in a shoe to killing children, the ladies realize that maybe they aren’t exactly the hard fought heroes they think of themselves as. It is with great zeal that King Gary pronounces them guilty and sentences them to death.

Listen, you really got to read the rest of the issue for yourself. I had to do a double take on what happened next and especially the final page. I mean… damn.

This issue is the fourth in the current storyline and like all the others, it has a good deal of action and really smashes some of what you thought were givens in the Rat Queen universe. Ryan Ferrier (Mighty Morphin Power Rangers, The Fuse) continues to put his own mark of the title, and his grasp of the character voices is great. It feel right, it flows right, and it is satisfying on several levels. Despite the fast pace, he still manages to give each of the Queens enough time to establish their status and express their personalities. The idea of having Betty get sober is brilliant, and adds to her character, taking it in a direction you may never have guessed. What happens when you are no longer so blitzed out of your gourd and start realizing that you could actually die? Betty is finding out. Equally, his attention to Maddie has been great. He perfectly captures the struggles she is having as she tries to make herself comfortable with her goal of being a Rat Queen, but at the same time still has the conscious which the others have buried so deep. It’s great stuff and stands out as a strange sort of coming of age story.

I’m not really sure what to say about the artwork by Pricilla Petraites (Brilliant Trash, Dreadnought: Legacies), except it is stunning. The Queens all have their signature looks, but it has her style and mark all over it. Add in the immersive colors of Marco Lesko (Robotech, The Shadow) and you got the total package.

There is not a lot I can say here without spoiling a really great issue, but damn, is this one a barn-burner. The swerves here carry you to a new level, and overall you are in for quite a ride. I really can’t wait to see the next issue to find out what Ferrier and company have planned for a follow-up.

REAT QUEENS #19 is a hell of an issue, and hell just might be next!

Great story-telling that keeps you guessing, told with spectacular imagery. Well worth the price of admission.