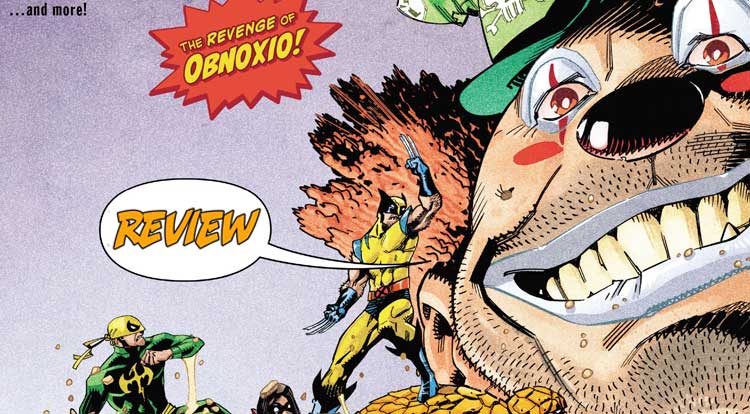 Everything old is new again…  even Obnoxio The Clown!  Your Major Spoilers review of Crazy #1 awaits! Previously in Crazy:  No super hero is safe!  No comic book event is sacred!  Will the Marvel Universe ever be the same?  Will we want it to?

Say what you will about Martin Goodman, he had an eye for comics that were gonna make it big and the wherewithal to order his creatives to knock off those comics. Originally launched in 1953, in the wake of EC’s ‘MAD Magazine’, with a magazine-sized revival in 1973 that ran for nearly a decade, ‘Crazy’ is best remembered (if it’s remembered at all) for ‘Teen Hulk’, a parody of Marvel’s Green Goliath as a troubled adolescent. This issue opens with a reference to Crazy’s original mascot, Irving Nebbish, before launching into an Obnoxio The Clown story filled with meta-references, fourth-wall breaking and an appearance by C. B. Cebulski and… it’s not funny. We launch into the stories proper, featuring a No-Prize awards ceremony that feels like a leftover of the 90s, a series of tales of the Man-Thing where he gets a haircut, tries to date and more, a looooong series of “Rejected Marvel Comic Book Covers” and the requisite board game in the middle gatefold of the issue. Things continue downhill with a really hackneyed series of jokes about Cable and basic cable, ending with a day-in-the-life tale of a poor schmuck who just wants to find happiness in the Marvel Universe. There are also the requisite jokes about Sea Monkey ads and Hostess Twinkies, which every humor comic book is required to include, by law.

IRONIC THIS ARRIVES JUST AS ‘MAD’ GOES AWAY

As one of the old fogeys who remembers 70s ‘Crazy’, I’m more than a little disappointed at how little edge this comic has. Humor is tough, yes. Humor is absolutely in the eye of the beholder, making it more difficult, but most of these punchlines have already been used in ‘What Th-?!’, the Marvel Year-In-Review books from the late 80s and in various Deadpool stories in recent years. Not only that, some of those Deadpool stories were really, authentically funny, making it clear that it’s possible to do comedy in comics successfully. There’s a running gag about a young woman interviewing Marvel editor Ralph Macchio that rolls out ‘Karate Kid’ jokes that I remember from high school, which underlines the biggest problem with this comic: It’s clearly meant to parody previous parodies from Marvel, and that’s just too many levels of meta. As far as the art goes, it’s an attractive comic, showcasing the work of Don Simpson, Bill Morrison and other cartoonists who can pull off the traditional bigfoot cartooning, with only a few instances of “too realistic” modern art styles undermining the humorous intent.

BOTTOM LINE: NOT THAT FUNNY AND I’M BUMMED

In short, while there isn’t anything patently, overtly offensive (though the “Little Insulinnies” snack cake ad annoys this father-of-a-Type-I-diabetic), there really aren’t any laugh-out-loud moments to offset the parts that are tedious. As such, Crazy #1 has to get by on the strength of some good art, 40-year-old joke setups and generally good-natured attempts to make us laugh, earning a slightly-below-average 2 out of 5 stars overall. If you remember the all-humor issue of ‘What If?’ from 1983, you’ll not only remember a more successful take on the same humorous intent, you’ll recognize at least three of this issue’s jokes, and that’s kind of a bummer.

There's a lot of talented creators putting in a lot of well-intentioned effort, but this just doesn't stick the tickle-the-funny-bone landing.