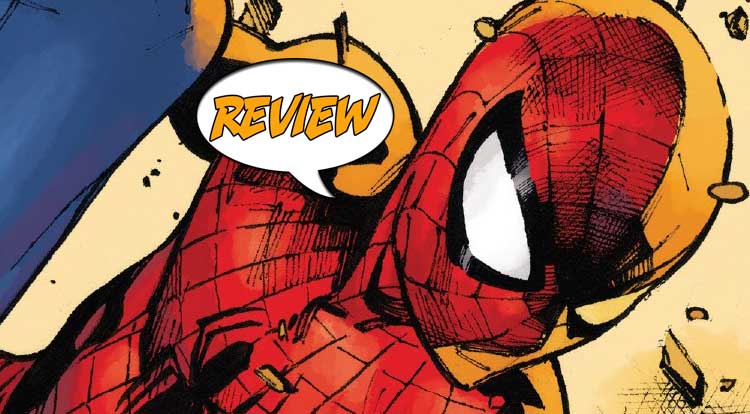 Previously in Spider-Man:  Peter and Mary Jane have had their first run in with the new villain Cadaverous and it did not go well.  What horrific impact from this horrific villain will scar them the worst?

NOT AT ALL WHAT THE  SOLICITATIONS IMPLIED

After reading issue #1 of this series, I was a little bit torn about the dissonance between the Marvel solicitations and what was actually in the issue. On the one hand, I appreciate when the sales pitch doesn’t spoil the whole book for me, but #1 left me with a bad taste in my mouth. This issue begins with a monologue from Cadaverous, a puzzling diatribe about trying to heal, which cuts directly to Benny Parker defiantly telling Aunt May that he won’t forgive his dad for giving up. Benny is overwhelmed by his emotions, blaming Peter not only for Mary Jane’s death, but for giving up being a hero AND for abandoning his son. This leads to a dramatic moment where he burns his father’s costume in the family barbeque. It’s melodramatic, but feels authentic for a kid of his early teen years, and it does generate a little successful drama in a very talky first half of the issue. Of course, that’s all shot down when the girl he’s crushing on shows up in costume as ‘The Marker’ and invites him to go out for a little civil disobedience and tagging of corporate property. He sadly looks at the ashes of Spider-Man’s legacy, only to have May tell him, “He had more than one.” Benny then sets out into the night, ending up web-swinging across New York to get himself and his friend out of trouble, only to get the attention of the press… and an unexpected return from his father.

As ‘What If?’-style tales go, the premise here is okay, but it’s also remarkably similar to the origins and initial appearances of May “Spider-Girl” Parker, twenty years ago. What’s more, that version of the story had a strong, more fleshed-out protagonist and a much stronger focus, as this issue really meanders. Benny’s frustration doesn’t feel entirely authentic, and not enough time is spent trying to show us his struggles before he’s suddenly decided (maybe) to become a super-hero. The costume-burning sequence comes close, but gets immediately torpedoed by what happens next. The issue then flits about from place to place, as we have a little bit of Peter investigating something in a desert, some high school drama stuff, Benny’s big blow-up, the “young hero learning his powers” riff, and also the leering visage of Cadaverous who sends out more of his cybernetic drones to attack the new young Spider-Man. Sara Pichelli’s art really sells how out of his depth Benny is against actual super-foes, but his awkward web-slinging is undermined by the dialogue, as he argues with the man he’s trying to save. That same mismatch of art to script is seen throughout the issue, and even the final page reveal of Peter waiting to talk to his son combines a stern/concerned face with “Hey, there, Spider-Man.” Again, it may be an intentional dissonance, but it works against my enjoyment of the issue.

The biggest issue with Spider-Man #2 is not that it’s overly familiar (it is) or that it is unfocused and scattered (it is), it’s a fundamental question of how it has been marketed, meaning that even Sara Pichelli’s excellent art can’t hide that fact that the Next Big Thing is just another super-teen coming-of-age story, leaving the issue with a still-better-than-average 3 out of 5 stars overall. If this series has a killer ending that makes the meandering pace of the first two worth the ride, I might revise my opinion to “wait for the trade”, but based solely on the contents of the issue, this one is quite skippable.

The art looks great from top to bottom, but the scripting doesn't hold up its end of the bargain, and this is all well-worked dramatic territory.