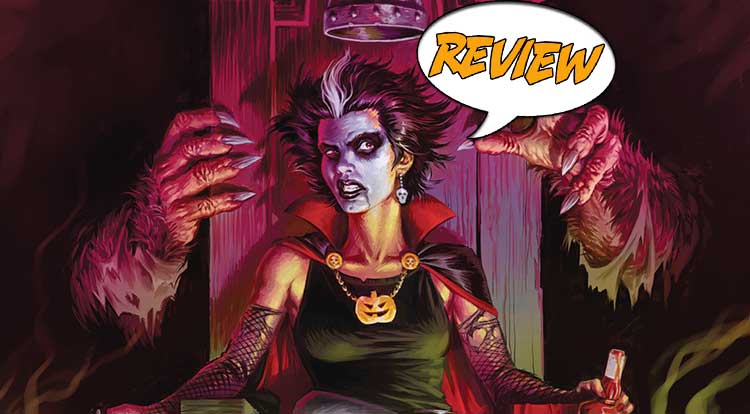 News anchor Jerri Butler’s life is a mess. She’s torpedoed her job at the family television station, and now her brother has asked her to become the new late-night horror movie host. Things cannot get much worse, can they? Well… yeah. Yeah they could. Find out what all the hubbub is about in COUNT CROWLEY, RELUCTANT MIDNIGHT MONSTER HUNTER #1, on sale from Dark Horse Comics on October 23rd! Previously in COUNT CROWLEY: Count Crowley, alias Rich Barnes, has been AWOL from his late night hosting job at KSKB television for some time, and station manager Ben Butler is at a loss for what to do. On top of that, his sister Jerri is seemingly trying to sabotage her position as a new reporter at their parent’s channel. Family, what are you going to do?

Staggering out of the back door of television station KSKB, Jerri Butler is full of vim and vigor, not to mention some high proof Blackbird whiskey. Dressed in a garish costume which consists of white face paint, a studded belt, and high collar red cape, she staggers out to her car when she is approached by a stranger in distress. The man is desperately looking for Count Crowley, he promised to help, where is he?!  Jerrie doesn’t seem to be the sympathetic sort when she is not three sheets to the wind, so as she tries to dig her mace out of her purse, while brandishing the whiskey bottle threateningly, she is surprised when the man pulls a gun… and hands it to her. Moments later, she finds herself facing down a snarling monster straight out of a b-movie.

How did our anti-heroine find herself in this situation?

Well, it all started with her going on an ill-fated assignment to cover the North Central Missouri Renaissance Fair. The fair owner, Ralph Bonner, was promoting the heck out of the fair, talking right over Jerri as he discussed the attractions, the souvenirs, the food, and especially the wine. The wine was the breaking point. Instead of the fine, high quality wine Bonner was proclaiming, Jerri proclaimed he was swapping out cheap, box wine and charging premium prices. She should know, she had already been guzzling that same wine straight from the box just moments before. In her less than sober state, she proceeds to unveil the truth about the fine wine and, literally, ends up flat on her back in the mud. No problem, they can edit out all the bad stuff, right? Oh, it was a live feed. Well, snickerdoodle!

When she returns to the station, her brother Rich fires her, and then hires her back. This time he needs her to be the host of the stations late night show, Friday Night’s Scream Theater. Jerri’s personal demons and financial issues make this something she cannot turn down, regardless of how much she hates horror films. Donning an impromptu costume, she proceeds to do her best and… oh wait; you said she was drinking before she went on the air. Dagnabit!

AND NOW A FEW SCREAMS FROM OUR SPONSOR!

I heard about this book through the grape vine several months before I had a chance to review it, and at the time, I was not sure what to think. This was to be the brainchild of actor David Dastmalchian, who at the time, I only knew as Kurt in the Ant-Man and Ant-Man and Wasp movies. I’ll keep my personal thoughts at the time to myself, but let us say I was not sold. Fortunately, it turned out to be a case of putting my critical cart before the horse. This is more than a story using the time-honored tradition of horror hosting as an impetus for telling a cheap horror story. Dastmalchian has begun to lay the groundwork for what is a very entertaining story. By making his protagonist something of a self-abusive sad sack, you feel for her. I mean, yeah, she is bringing her problems on herself, but the fact that her brother is willing to continue to put his neck out for her goes a long way to give you a reason to care, and you do care. Despite her attempts to wreck even the last chance her brother gives her to redeem herself, she finally seems to come out and succeed at something. That doesn’t change her attitude, but it gives you hope for her future. Dastmalchian works in a little of the history of horror host in general into the mix by having Jerri perform more than one function at the station, and in her voice I can hear shades of Ghoulardi and Zackerly. Also, I think I may have detected just a little of Peter Vincent thrown into the mix. Overall, the writing is wonderful and entertaining.

This highly well written book is made even better by the artwork of Lucas Ketner of Witch Doctor and Kill The Minotaur fame. Ketner’s style of art is wonderful for this title. He has a great deal of motion in his style, and the characters practically move on the page. I personally would love to see this in black and white on off-white pulp; I think his lines would stand up that well by themselves. Fortunately, Lauren Affe (Five Ghost, Ghost Fleet) handles the colorist duties, and they are excellent. Affe endows the page with a color pallet that has a slightly aged and dingy look, very reminiscent of the Eerie magazines from the early to mid-seventies. It all combines for a great experience for the reader. Bravo to all involved.

BOTTOM LINE: A ROLLERCOASTER WITH A HELL OF A DROP

I was not sure if it was possible to fall in love with a creation of staples, paper and ink, but I think I have come as close as humanly possible. Long time readers will know I am a great fan of horror host and of classic horror in general and this book just gave me the giggles while I read it.

Count Crowley Reluctant Midnight Monster Hunter #1 is one of those rare books combining horror, comedy, and even a little drama into one wonderful four-color package, and doing I intelligently.

Count Crowley Reluctant Midnight Monster Hunter #1 is a book I strongly recommend you pick up and bury yourself in.