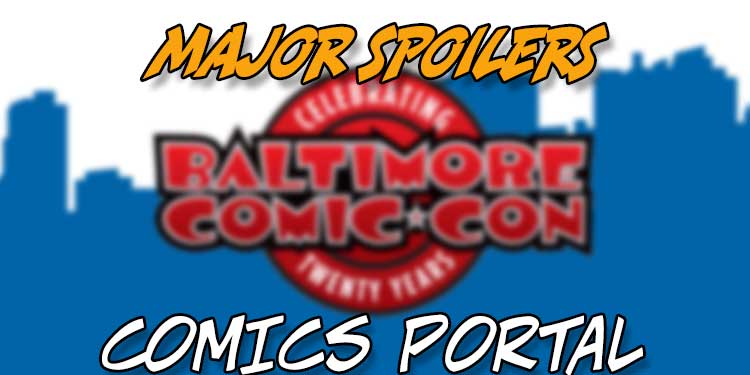 HOW WAS BALTIMORE COMIC-CON?

Of course, I was helping out Richard Rivera from Stabbity Bunny. The opportunity to go didn’t present itself until two weeks ago when a friend had to cancel. We took his place, and began to prepare for this convention.

We were in Artist Alley again, and this time we were located in the far right row opposite the Emergency Exit lane, as I call it. The good news is that con-goers often go to the far left or far right in order to start their trek through a con floor. Apparently a lot of people went to the far right because we saw a lot of foot traffic passing by, particularly on Saturday.

For what it’s worth, we experienced something of an unusual circumstance. The amount we made on Friday was exactly the same as the one we made on Saturday. In all our time at cons, we’ve NEVER had that happen. And it was a good number, too. Sunday was slower as far as attendance and, therefore, business. But it was still one that we and a lot of other vendors did very well at.

Artist Alley was pretty big this time. There were several comics creators there as well as novelists and artists. I did get a kick out of one writer who called himself a “write-ist” instead of an “artist.” I have to remember that! Of course, great comics pros were there as well, including Mike Zeck, John Beatty, Rafer Roberts, Neal Adams, Tom King, Marv Wolfman, Barry Kitson, Jim Steranko, and many others!

Vendors were plentiful as well, many of them familiar from BCC’s past. I saw one particularly devoted to them! Nice!

The stars were fan-friendly ones, including Aaron Douglas, Tara Strong, Greg Cipes, Joel Stoffer, and Johnathon Schaech. Once during the con, Strong and Cipes announced an upcoming event in the voices of Raven and Beast Boy from Teen Titans Go. Fun stuff!

However, one thing did NOT happen during the convention. This was the first BCC in recent memory when someone didn’t pull the fire alarm! Yayyy!

HOW HAS 2019 BEEN FOR CONVENTIONS? I have to qualify my evaluation of this year based on the fact that, of course, I couldn’t attend ALL the cons in 2019. For instance, there was a great convention in Memphis going on while I was in Baltimore. Maybe next year! Also, there are several cons still coming in the weeks ahead, and I don’t intend to demean them. But BCC is often the last one I get to during a calendar year, so I start looking back at the year when it’s complete.

Conventions are becoming a bigger and bigger part of the comics experience, I feel. Granted, some of the smaller cons were pretty small, but many of the bigger ones continue to grow and grow. I look back on Dragon Con and New York Comic Con as prime examples. Each one announced this year was their “best ever,” and I felt that was true when I was there.

I still notice there are some new cons popping up, but I wonder how often that will happen. As much as I think there are still places that could support conventions, I believe there are many that will not be around in the years ahead. We’ll see what shakes out of all that.

So I don’t believe we’ve fully arrived when it comes to conventions. But I’m not sure if we’ll ever truly reach a place where change doesn’t take place along these lines. There are always some cons I haven’t attended that I want to get to next year.

In 2020, I want to get to Wonder Con, one I’ve wondered about for a long time. As I understand it, Wonder Con is run by the folks who manage San Diego Comic Con. However, this one is much more oriented towards comics than SDCC, which has become vastly more media oriented. I know several folks who have told me that Wonder Con is what SDCC used to be, so they recommend it highly!

On the other hand, there are some cons I’d love to get back to. That includes Planet Comic Con in, Kansas City, and Emerald City Comic Con in Seattle, Washington. These two I didn’t get to return to in 2019. Of course, I want to return to New York Comic Con as well as Baltimore Comic-Con.

Of course, I don’t have next year’s schedule set yet, so we’ll see how things will work out. Cons are something special, with growth of fandom happening at a rapid rate. We’ll see what developments come in 2020!

What do you think? Are conventions better this year than in previous years? Are you planning on going to cons in 2020? If so, which ones? Or what ones are you thinking of passing on? Whatever your opinion, be sure to share your opinion and thoughts in the space below!