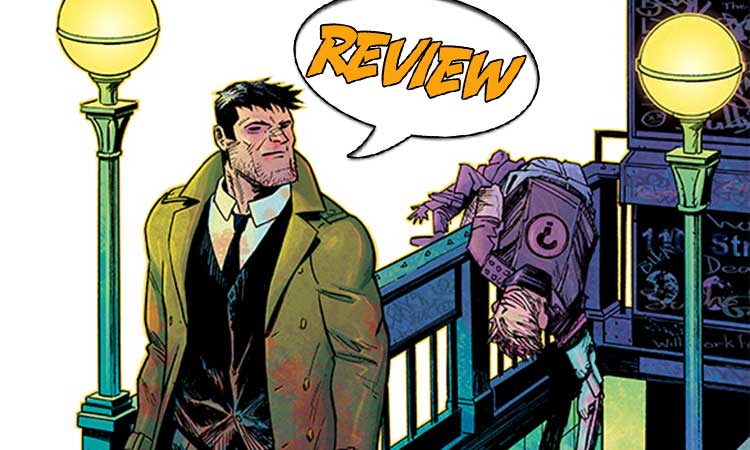 Jack McGinnis holds one of the two existing AIs in the world.  His nemesis Oppenheimer has the other.  Plus control of a trio of merciless Predator drones, all targeted at Jack.  While two other Ledger women are breaking into an airbase where the drones are launched, Jack has to work out a way to break into the airbase and confront Oppenheimer before he can launch his rocket.  Will Jack make it in alive?  Check out our Major Spoiler review to find out! Previously in Analog:  the Great Doxxing led to the end of privacy around the world, and America has collapsed into a sort of religio-fascist state.  Jack McGinnis is a ledger man, responsible for transporting the big secrets, safe from the open online world.  During the course of his travels, he has fallen foul of Oppenheimer, deviser of an artificial intelligence, and a grand scheme of world domination.  Of course, Jack just happens to have the other artificial intelligence.

RUSHING FOR THE EXITS

Looking back over my review of Analog #5, I commented that it took me a few pages to get into the story.  Can’t say the same about Analog #9, though.  This issue starts with a rush and finishes with a bang, and in the middle, it’s full of strafing runs and Predator drones, female assassins launching a blood bath, and a rocket ready to fly high into the sky, with one of the two AIs on the planet installed inside.

Writer Gerry Duggan, as with the earlier issues, has constructed a full throttle story for Analog #9.  It’s bright and breezy, with broadly drawn characters providing entertaining commentary along the way.  The ‘yee-haw’ Texan pilot who gets Jack to where he needs to be is a case in point, a funny little fellow full of grit and vinegar, the female assassins to prudish to wear the urine stained uniform of a guard they just killed, or Oppenheimer’s aide de camp, who is chews the scenery so hard my teeth hurt reading it.  All provide a wealth of fun characters to admire as you speed along to the final page.

A plausible near future world full of broadly drawn characters racing the countdown to disaster!
You don’t get to see much of the background world that is Analog.  Sure, there are the religio-police, with their cross and stars reminding us of the perils of the union of church and state.  There’s a visceral thrill to be had watching Jack wipe them out with both barrels on full auto.  There’s also time for Jack to make a cautionary comment in his internal monologue about what happens when fascists take control.  Overall, the background details recede as the main elements of the plot begin to come together.

As always, David O’Sullivan’s art is a real highlight.  His square-jawed characters proliferate, underlining the hard as nails approach the story has taken to date.  He isn’t all one note – Mr Chatlin, the Texan polite, is a scrawny little fellow with a baldhead and a big heart, and O’Sullivan draws him with vigor.  O’Sullivan’s style, which looks more sketchy than rounded, perfectly suits the story, crackling with energy and a real sense of pace.  Good use of angles make the dogfight between the fighter plane and the drones have a real sense of action, driving home O’Sullivan’s ability to tell a story just through imagery.

BOTTOM LINE:  SWINGING FOR THE FENCE

There’s a lot to like in Analog #9 for those who have stuck with the series thus far.  There’s some payoff as elements of the mystery are unveiled.  There’s also a sense of satisfaction as the bad guys on the ground get their comeuppance.  Duggan and O’Sullivan have once again provided a strong story with a number of converging storylines to the brink of what feels like will be an exciting conclusion.

Analog #9 is great, pulpy fun. It’s full of action and incident, and appears to be barreling towards some sort of conclusion to the main arc, as Jack and Oppenheimer come face to face. This isn’t an issue full of penetrating characterization, or mordant philosophizing about the nature of reality in a post-privacy world. It is a bright and breeze adventure, people with entertaining characters more sketch than portrait, and is all the better for it.