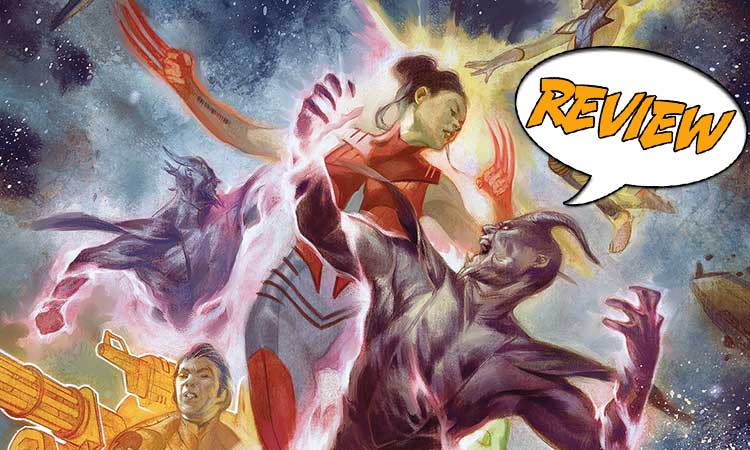 The fight with the Widowers brings the crew from Earth into the eyes of the Wardens of the Gyre. What new threat have they uncovered? Find out in Psi-Lords #5 from Valiant Entertainment. Previously in Psi-Lords: Beacon was apparently killed by Scion, but none of the rest of the team knew this. Scion claims that she would have wanted then to continue looking for the Psi-Lords’ ship, which they find in fairly short order. Once there, Scion tells them that the ship has monoliths that were the source of the Psi-Lords’ power. Then he rambles on about his life as a guru on Earth – before grabbing hold of the monoliths and their powers. In the ensuing fight, Beacon returns, and reveals another memory of their past. As they get rid of Scion, the Widowers show up, looking for revenge.

WHO KNEW THERE WERE RULES HERE?

Psi-Lords #5 picks up where it left off, with the Widower talking to our heroes. There’s a running joke from early on that they’re known as the “Astro-Friends” that is played with a bit. As the Widower monologues at them, we see blood spurting in the background as Hazard takes matters into her own hands. This is a moment of humor as prelude to the fight. They’re badly outnumbered, but they’re more capable of holding their own, with a little more humor as Artisan boldly rushes in to help Beacon, who is more than capable of handling herself.

The fight stops when Zelmax, of the Yossari (the cat-like people from a few issues earlier), shows up. It turns out there are rules to the gang-like warfare in the gyre – those with brands must not kill others with brands. Beacon pledges that they will submit to being held until the Wardens assemble, as long as they get an opportunity to make their case.

In the meantime, Scion is still around, and someone, possibly related to the monoliths, is talking to him. Not only that, they call him “Steve,” which annoys him and is a clever way to take Scion down a peg here. Apparently, they rescued him for some reason, but they don’t hesitate to break down his delusions of grandeur. Scion may believe that he was a beloved spiritual leader, but there was precious little difference between him and a cult leader. The person talking to him is one of the Starwatchers.

More of the plot unfolds. Scion tries to persuade the Starwatcher, Dr. Patience, to exterminate the four main characters, telling him about how dangerous Earth people are. The Starwatcher, one of those who set up the Gyre, tells him about how they trapped the Psi-Lords here and are trying to destroy every trace of them they can find. These traces of the Psi-Lords are what they consider a god virus – the presence of it manifests in the concept of deities. Think of religion gone extreme and someone with god-like powers at the helm. And these are not the first people of Earth who have become troublesome from it.

It’s a fascinating concept, and with Artisan, Hazard, Beacon, and Tank all having memory issues, we also have information presented in ways that build the story bit by bit but aren’t always reliable. The pacing of the information drop is quite good in that there’s a sense of steady momentum which blends nicely with the tension of not knowing who are the good guys or the bad guys, at least for certain.

The art of Psi-Lords #5 is, as it has been from the beginning, fabulous. The Yossari we meet in this issue are not the cute, small versions who were the exploited farmers. These Yossari are full-grown warriors who are quite ripped, which is also played for humorous lust with both Tank and Hazard. Their expressions really pull this off without being over the top.

The Gyre is strange enough to begin with, but Scion/Steve is in some sort of Starwatcher limbo. It’s a little disorienting and disquieting. The lettering helps us keep track of who’s talking, especially as there are a few cuts with overlapping dialogue. I like when lettering is used to its fullest to keep things clear, especially when it has enough subtlety that it doesn’t distract from the spoken word.

BOTTOM LINE: THE LAW OF THE JUNGLE

Psi-Lords #5 further complicates the story. It’s not the most straightforward read month by month as things keep shifting, but the concept at the heart of it is interesting. The tenuous and shifting alliances keep up the tension, and it sure is pretty to look at.

It’s out of the frying pan and into the fire as fighting with Scion gives way to fighting with the Widowers, and then a tenuous truce with the Yossari.