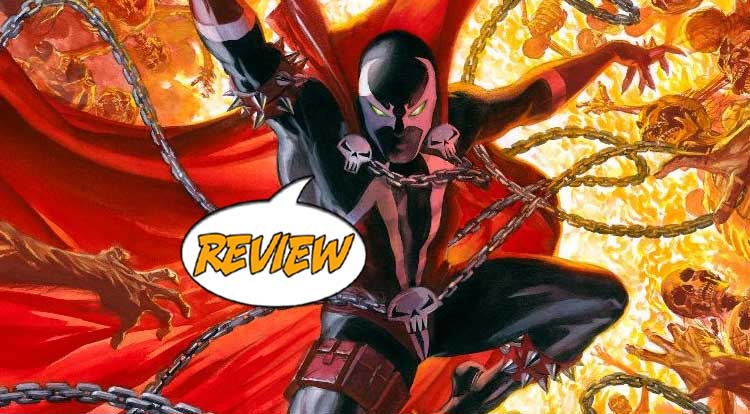 A new breed of Hellspawn has been born!  Your Major Spoilers review of Spawn #301 awaits! Previously in Spawn:  The Rapture!  Heaven’s answer to the mythic Four Horsemen of the Apocalypse, these eternal warriors are tasked with eliminating the plague called humanity from the face of the Earth. New allegiances form, new enemies rise, and history is made…

We open as The Violator has finally won his battle against the Hellspawn, stealing his symbiote costume and gloating that he can now raise his army of evil. The response is immediate, warning him that he’d better have a bigger army than that, as Spawn is now a King of The Dead. Oh, and the costume is actually a bomb, which explodes with massive eldritch energies, bringing the power counter that has been a mark of Spawn’s energy since #1 finally reaches zero. Some weeks later, having destroyed the forces of Heaven and Hell, Lieutenant Al Simmons makes the rounds of talk shows, finally explicitly being treated as a superhero in his crusade against corruption and injustice that just happens to have unseated high-level corporate jerks around the world. Of course, he’s also created a power vacuum that he is told by will bring new players into the battle that was once just between those above and those below, but he’s more than ready to face any and all challenges, boasting that he doesn’t even need the symbiote anymore to kill anything that threatens him.

OF COURSE, THAT SHOULD MAKE THIS #325

This issue serves as a “clearing the decks” chapter, making it clear that things have changed dramatically for Al Simmons as well as for the status quo of this founding Image book. There are even hints of other Spawns awakening around the world (we get a look at one who seems patterned after a ninja, with others shown in shadow or closeup after the explosion) and the revelation that all the secret metaphysical threats are now out in the open is an intriguing one. This issue features multiple art teams on mini-chapters within the story, which does successfully delineate the change in settings, but serves to make for a fragmented reading experience. (The shift from Clayton Crain’s fully-painted art to Jerome Opena’s McFarlane stylings is particularly noteworthy.) All in all, though, this issue holds together remarkably well, updating elements like the recurring talking head newscasters and the power countdown for the new era of the book, and there are a couple of really impressive pages (the first appearance of Simmons, wrapped in barbed wire and blood, with his symbiote gone, is particularly cool.)

BOTTOM LINE: A STEPPING STONE TO A NEW ERA

While the congratulatory tone of the opening scroll and some of the back-matter feels like a smidge too much, even a non-fan has to admit that this issue is a remarkable achievement, and the new status quo for Spawn feels like something we haven’t seen before in the book’s multiple eras. Spawn #301 suffers a bit from the transition between artists, but all of them are very skilled and it’s all quite engaging, even for a casual fan, earning 3.5 out of 5 stars overall. As someone who has never read this book on a regular basis, I was able to understand and engage with it, and I enjoyed little continuity touche (like undead Overtkill) that I did recognize, making for an interesting reading experience.

It's more reader-friendly than you'd expect for a #301, and has some good (if wildly varying) art and a whole new status quo for Spawn.