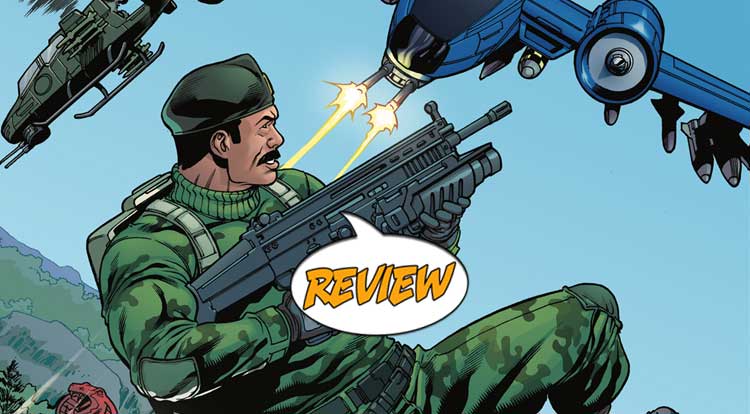 Cobra Commander wants Snake-Eyes for his team. But WHICH Snake-Eyes? Your Major Spoilers review of G.I. Joe: A Real American Hero #267 awaits! Things open on Staten Island, where a young woman named Laura sits in an entirely empty house awaiting a call to action. When it comes, she immediately suits up as a Crimson Guardsman and rallies her troops, who have embedded themselves (and their HISS tanks!) throughout the suburban neighborhood. At the same time, the Motor Pool at Fort Wadsworth receives their new shipment of fuel from a new provider, the RABCO corporation. Though this ruse gets them through the gates, the members of G.I. Joe stationed there don’t fall for it, leading to an all-out firefight. Cobra’s various elite troopers break through the surprised Joes’ ranks, though, successfully making it into The Pit (their headquarters, hidden under the assistant Chaplain’s school) with one goal: Capture Snake-Eyes! Of course, there are some problems there, as first, Snake-Eyes is dead. The man currently wearing is actually Sean Collins, the son of a Crimson Guardsman who once stole the mantle of Cobra Commander.

Oh, and the real Snake-Eyes’ mind and memories are currently in the body of a DIFFERENT Joe, Dawn Moreno, also sometimes going by Snake-Eyes. It’s… complicated.

HAMA CAN WRITE AN ACTION SCENE

I think the most satisfying part of this issue is the fact that, while it’s mostly fighty-fighty, there’s a lot of important details revealed through dialogue. The Joes identify themselves and each other as the appear, the various squadrons of Vipers are called out in dialogue and it never quite reaches a level of silliness that destroys the suspension of disbelief. The battle that rages is actually relatively realistic, given the presence of ninjas and mind-swapping devices, with people falling to explosions, bullets and gas and it never quite being clear who does or doesn’t survive the experience. It’s also a big win for Cobra (though not the big win they think it is), which helps to remind us that this isn’t the cartoon and that there are real consequences in real wars. The Atkinses deliver on the art front, with detailed uniforms (a great help in the identifying which Joe is which front), excellent machines and weaponry and a real eye for block out the combat. the final page reveal of a triumphant Cobra Commander is an excellent out, providing a little extra kick in the ribs after seeing our heroes fall, but also doing the impressive trick of making Doctor Mindbender not look ridiculous.

The backburner Snake-Eyes plot is taking center stage once again here, and as someone who has been following G.I. Joe again because of that story, I’m happy to see it advancing. Better than that, though, is the fact that the entire world of G.I. Joe: A Real American Hero #267 is equally important, with characters like Stalker and Clutch getting their due (and hopefully not dying) and reminding us why Larry Hama is a legend of long-form storytelling, earning 4 out of 5 stars overall. I’m not sure where this is all going, but I’m comin’ along for the ride.

It's all action, but strong art and the fact that Larry Hama writes amazing action sequences brings it all together as a win.