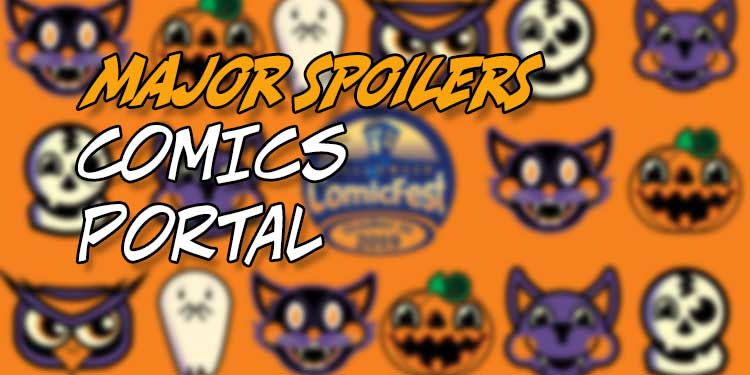 WHAT IS HALLOWEEN COMICFEST?

For those who came in late, let me quote this year’s news release about this event:

Halloween ComicFest (HCF) is the comic book industry’s premiere fall event – a single day when participating comic book specialty shops across North America and around the world give away specially published comic books absolutely free to anyone who comes into their shops. HCF is the perfect event to experience comic shops as destinations for Halloween and horror-themed comic books, collectibles, and other merchandise! In other words, Halloween ComicFest is the Spooky Free Comic Book Day!

Every year, on the last Saturday in October, the industry comes together to give away free comics and encourage both curious, first-time comic book readers and seasoned comic book fans to flock to the best place in the comic book community: local comic shops. Each one is unique in its community, with a style and personality all its own, and each one carries a full line of spooky comics, graphic novels, toys and related products. Local comic shops are the hubs of our community, where fans can come together to discover new comics, make lifelong friends, and find a sense of commonality.

Major publishers such as DC Comics, Marvel Comics, Dark Horse Comics, IDW Publishing, BOOM! Studios, Dynamite Entertainment, and Image Comics, along with a slew of independent publishers, put out free comics for fans to enjoy at the thousands of local comic shops that participate in Halloween ComicFest, a.k.a. Spooky Free Comic Book Day! Over the years, Halloween ComicFest has featured a variety of beloved horror-themed titles such as Hellboy, Goosebumps, John Constantine: Hellblazer, and The Chilling Adventures of Sabrina, as well as other popular titles such as TMNT, Pokémon, and Spider-Man.

If this sounds a lot like FCBD, it should! The same folks behind that massive May event are trying to duplicate their success in the Fall with this one.In addition to passing out free comics on the last Saturday in October, many comic book shops make a whole day out of the event by hosting cosplay contests, creator signings, and photo opportunities with costumed characters, as well as giving out candy, prizes, and holding raffles throughout the day!

And I truly want that to happen. After all, the industry, particularly local comics shops, could certainly use the help!

THERE IS SOME PROGRESS There are several stores that are benefiting from Halloween ComicFest. The one I frequent is holding several contests on that Saturday, and they say more and more people are coming to participate each year.

I also noticed that the number of comics available this year is up from 2017, for example. They had about 18 two years ago. This year, there are 28 titles to hand out, 19 full-size comics and 9 mini-comics. That’s a significant increase!

Of course, Marvel and DC are well represented, but there are also books from Mad Cave Studios, Aspen Comics, Source Point Press, AfterShock, Dark Horse, Youneek Studios, IDW Publishing, KaBoom!, among others. For a complete list, go to this link!

“This year’s Halloween ComicFest is poised to be bigger and better than last year!” said Halloween ComicFest spokesperson Ashton Greenwood. “The comics available this year are designed to appeal to a broad range of tastes, from the all-ages Mini Comics featuring popular properties like Archie, DC Superhero Girls, Nickelodeon’s The Loud House, and Pokémon, while the Full-Size Comics feature well-known characters like Sonic the Hedgehog, Boba Fett, Iron Man, and Batman. Halloween ComicFest is the perfect time to discover the wonders of comic shops and experience them as premiere destinations for Halloween fun!”

I also think cosplaying is on the rise, and there’s no better time to show off your costume than during a local shop’s costume contest. That goes double for uniforms that are based on comics characters, be they superheroes, villains, or other kinds of people.

THERE ARE GOOD REASONS TO PARTICIPATE! I have often said that the reasons to take part in this event are good ones! For example, instead of handing out candy or other Halloween staples, you might tickle someone’s imagination by giving him or her a comic to read.

Also, with some families uncertain about taking their kids around a community that they seem to know fewer and fewer neighbors in, if they can take children to a comics shop, the chances of something going horribly wrong are greatly reduced in a public place like this.

With comics-related movies and TV shows on the rise, more kids apparently are interested in storytelling that includes those heroes and characters. That’s something I feel we should encourage!

If your store doesn’t host this event, you might try visiting one that does. Personally, I like having two shops to find merchandise in. When my first LCS doesn’t have something, maybe a second one just might!

And if we keep our local comics shops going into 2020 on a strong note, I’m all for it!

What do you think? Do you support Halloween ComicFest? Or is Free Comic Book Day enough? Whatever your opinions, be sure to share them in the space below!