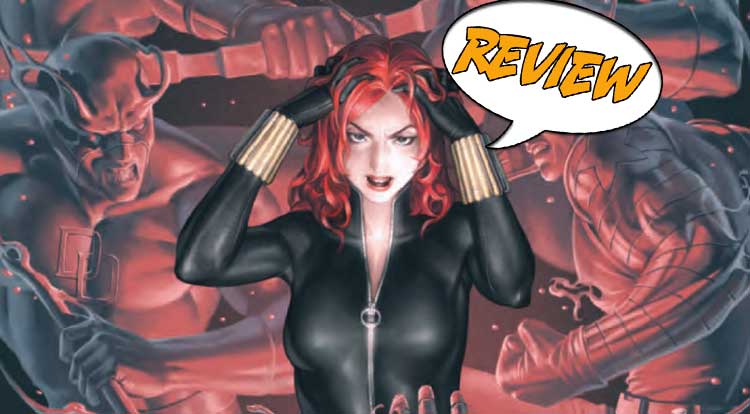 Web of the Black Widow #2 Review

Natasha Romanoff is on a mission to dispel some of the ghosts that haunt her. When she is confronted by her old lover, Bucky “Winter Soldier” Barnes, things start to get physical. Find out more in WEB OF THE BLACK WIDOW from Marvel Comics. WEB OF THE BLACK WIDOW #2

Previously in WEB OF THE BLACK WIDOW:  During a charity event cosponsored by Stark Unlimited, a disguised Natasha Romanoff gave a dance to her friend Tony Stark before warning him to stay out of the way. Natasha was not there as a guest, but as an assailant. Raiding the computer files of a businessman named Sobol, who’s grandfather once employed her skills to remove a rival, the Black Widow gained some of the information she was looking for. Information meant for a purpose she could not even share with her friend Tony Stark. By the time Iron Man arrived on the scene, he had nothing left to interact with except a hologream of Natasha. Tony doesn’t understand what is going on with his friend, but it worried him enough that he calls someone else Natasha trusted, Steve Rogers.

During her time as a spy, Natasha Romanoff honed her skills in many areas, so much so that she has no problem scuba diving into international waters to infiltrate the latest target of her mission of redemption. As she hears the interviews with the head of Collins Financial as she blends into the crowd, the talk of money and the power it has taken her back to her days in the Red Room under supervision of her trainer Ivan Vanko. He tells her it is a type of power, but that it was not the answer but a tool. She fights a mysterious, unseen figure she cannot fully see as Ivan and the Winter Soldier watch. But that was then and this is now. Collins Financial is holding a launch party in international waters for their new cryptocurrency, BindBucks, and Natasha is there for information. Dressed in a sleek black one-piece bikini with an hourglass shaped peek-a-boo stomach panel, she walks the ship and lays out her plan. Satisfied she has it all covered, she dives over the side of the yacht and enters her target room through the porthole. Even as she jumps into the dark room, she finds she was not unexpected. Her old trainer and lover, Bucky Barnes, waits for her, sitting on the bed. His mode of dress is a signal he is not there for a romantic liaison; the Winter Soldier is there on business. He wants to know what her purpose there is, and she reminds him: years ago, it was her mission to kill the Collins family so the brother could gain control of the company. It was a mission she succeeded in and now she wants to make it right. Her past with Barnes doesn’t stop her from doing what needs to be done and a action packed fight ensues. In another part of the ship, a surprising figure is completing the mission she intended to accomplish. More than just her past is haunting the Black Widow.

DEADLIER THAN THE MALE

In WEB OF THE BLACK WIDOW Jody Houser (Faith, Mother Panic) is doing something that everyone needs to sit up and take notice of. She is writing a master class on pacing and character motivation and it is some of the best treatment of Black Widow I have read in years. It is cinematic and full of action and you can follow what is going on without having to feel like the script was dumbed down for cheesecake value. Black Widow as a haunted character who is searching for redemption is not a new take, but Houser does it here better than nearly anyone else. An example of the excellent writing is how, in her memories, she never can see their opponent. Instead of just obscuring the figure or faces, or hiding them in shadows, you see them full form, but as white silhouettes. She has blocked their faces from her mind, dehumanized them to make her past missions more palatable, and the effect is jarring enough to feel natural. Is it a technique to handle her past deeds, are their issues with her memory that are taking effect?

Artist Stephen Mooney (Angel, Half Past Danger) gives Houser’s script a gritty, dirty feel. This is not a super hero story, this is a four color noir that is just above street level. The art brings to mind classic films like The Big Hit and Shades of classic spy and crime movies like The Hard Way and Ice Station Zebra. It is a feeling of grit, that nobody is coming into this with clean hands and everyone is guilty. The color by Triona Farrell add to the experience as well. Scenes with Natasha as she attempts to accomplish her mission have a warm hue while scenes where she flashes back have a cooler pallet. It is subtle and expertly accomplished.

Jody Houser is continuing to show a female lead can be hard knock and tough but maintain a degree of sex appeal. Her Black Widow balances the line between driven and tortured making you feel for her as you realize how much she lost in her past and how being resurrected may have given her a new future. This issue is as thrilling as any big screen bound spy or crime novel, and the twists will make you read it in anticipation of the next issue.

WEB OF THE BLACK WIDOW #2 has some wonderful character moments and great action. A must for fans of the character in any incarnation.

Web of the Black Widow #2

WEB OF THE BLACK WIDOW #2 is a necessary buy for fans of any version of the character. This could be what defines Black Widow for the future.