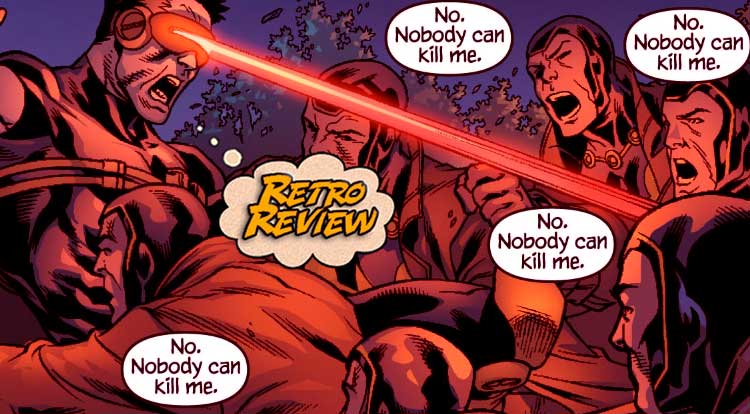 It’s always sad when a universe dies…  even more so when it never lived up to its potential.  Your Major Spoilers (Retro) Review of Ultimate X-Men #100 awaits! Previously in Ultimate X-Men:  The mutant teen Rogue grew up a killer in the black ops team known as Weapon X.  Then, she became and X-Man and gained a family.  But the trust she earned was lost when she started abusing Banshee, a power-enhancing drug and was thrown off the team.  Magneto then launched an attack that drowned the island of Manhattan and killed millions, leading to a huge increase in anti-muatn sentiment, leaving the X-Men esposed and their headquarters burned to the ground.

It’s about to get even worse. Meet Ultimate Madrox.  This new mutant (whose introduction is pretty cringe-worthy, talking about his approved list of music, such as “Smashing Pumpkins back when Billy Corgan had hair” and how he loves his iPod and Bose headphones more than anything else in the world) invades the house of Parliament in Britan and blows up not only the legislators but the assembled European superheroes such as Captain Britain, Captain Italy, Captain Spain and several other cardboard stereotypes.  Meanwhile, back at the X-Mansion, where everything is burning and/or smashed, Rogue discovers the body of Charles Xavier. We also get clear looks at the bodies of Beast, Nightcrawler and Dazzler, proving that this last issue isn’t going to be taking any prisoners.  Thanks to her psychic powers, Jean Grey realizes that Madroxes are all around, each with a similarly destructive agenda at Magneto’s behest, forcing the team to split up.  Another cringe-worthy Madrox introduction arrives, this one  forcues on his status as a geek and outsider, making me suddenly realize that they’re INTENDED to be kind of awful, as they’re the ravings of a partial person, with only fragments of the real Madrox’s personality.  That’s… actually kind of brilliant.  Cyclops takes a team to confront a Madrox squadron at Emma Frost’s academy, giving us the corpses of Sunspot, Havok, Polairs and Emma Frost, while Storm and Jean head to the Morlock tunnels, where Storm is forced for the first time to make a terrible choice. Cyclops is also forced to murder a couple of Madroxes, while Wolverine makes his way to the Savage Land, where Jean has identified the real Madrox in hiding.  Slaying Lorelei, his protector (and also the fake mother than one of the Madroxes explains is the center of his world), Wolverine discovers the real Madrox is just some kid, seeminlgy unaware of the carnage created by his duplicates over the past couple of days. I’m completely underwhelmed by Wolverine’s dialogue, which feels like a half-hearted effort to avoid the murder he’s best at (and also, Cyclops rallies his team with “KEEP FIGHTING.  DON’T EVER STOP,” which is just… UGH.)  Across the world, the X-Men fight valiantly, including an army of Rogues to counter the army of Madroxes, when their foes just suddenly… disappear. I’m not a fan of the art in this issue, which feels like someone trying hard to draw like Ed McGuinness when their own style might be better.  You can see hints of greatness in the facial expressions, but the limitations of the Ultimate house style hold it back a little bit.  I’m also not a fan of the “BURN IT ALL DOWN!” school of ending a comic book, especially coming in the wake of ‘Ultimatum’, a crossover whose big, stupid body count was not only NOT shocking, but the furthest thing from interesting.  The next appearance of this team features the death of Cyclops, Angel, Wolverine, Forge, Cannonball and Magneto (as well as Thor, The Wasp, Doctor Doom and a score of others) leading to the four (FOUR!) surviving X-Men disbanding the team.  It’s just nihilistic, and even the brilliant take on Madrox the Multipe Man can’t offset the fact that Ultimate X-Men #100 is is a dark, brutal murderfest with pretty-okay art that wants to be something more, capping off a book that never really quite came into it’s own, earning 1.5 out of 5 stars overall.  I’m not a fan of the Ultimate Universe or any of its titles, but even I think that the setting and characters deserved better than this.

A real bummer of an ending, even if you don't like the book, but one of the most ingenious portrayals of the "multiple bodies" super-power in comic history.