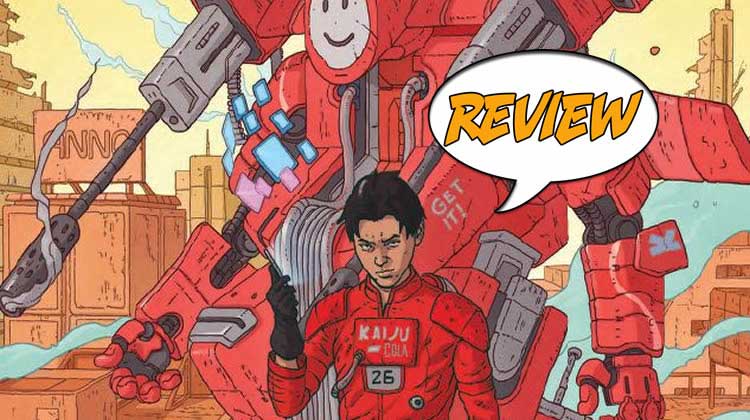 One of the great things about reading comics from another country is that the creators there often have different perspectives on things than those of us in the U.S. do. That means I will often go places I’ve never seen before, and I truly enjoy that!

A perfect example of this is Killtopia, a British comic that is truly sci-fi in its nature, asking “what if?” on so many different levels that the book is very, very possible—frighteningly so! I mean, even some of the robots have advertisements and happy faces on them! I have a feeling we’ll see that in real life before too long.

It’s a comic about where we are going and what we just might be doing much sooner than we figure. So look out! SOLICITATION:  Killtopia is a cyberpunk graphic novel series set in a mega-city in future Japan, where heavily-armed Wreckers are paid to hunt rogue mechs for money, fame, and glory. Rookie Wrecker Shinji and Crash, the world’s first sentient mech, are hunted as fugitives across the neon-soaked metropolis by Wreckers, android killers and Yakuza gangs. Shinji wants to save his sister. Crash wants to be more than a machine. They both want to make it out alive.

EVEN BETTER THAN THE FIRST ISSUE

It’s a common practice in the comics industry for local comics shops to cut their orders for a debut issue in half when it comes to #2. If people did that with this book, it was a BIG mistake. As great as the #1 was, this one is even better! And THAT’s rare these days!

There are three characters to watch closely—Shinji, a young novice hunter who ends up aligned with Crash, the very first sentient “mech” or robot. They’re on the run from some of the “higher-ups” in Killtopia, which was originally called “Sector K” before it turned into a warzone.

The third person to pay particular attention to is Stiletto, a Wrecker champion who normally attracts a lot of the attention from people around her. In fact, I read several folks online who thought she was the “main” character in the book. Well, in this issue, let’s just say that these people likely find out that they aren’t correct in that assumption.

A lot of other characters come and go from page to page, and the plot moves forward quickly so readers have to read with care. And that’s unusual for those of us who can zip through today’s comics in about five minutes each. You’ve got to slow down and keep focused on what’s going on and being said. Otherwise, you’ll be lost and lost quickly.

I particularly like the whole Kaiju Cola company and how they put forward a young corporate mascot called King Kaiju. He’s basically a child slave fused inside giant Gundam-style armor, and a lot of the most explosive scenes in this volume (or issue) revolve around him and Crash’s interactions. Yikes!

The dialogue is intense a lot of the time, so that’s another reason to be careful in your reading. Things are revealed that you must know when characters are talking with each other, so be sure to pay attention! Not only that, but many of the people use a “future-speak” type of language that you have to sort out as you go along, which I enjoyed.

Another fascinating thing to watch are the various “background” people. For instance, there’s a vendor on the street with a sign above him that says “Make Mine Miso,” and he bears more than a passing resemblance to Stan Lee. Then one of the Wreckers looks very much like Ash Ketchum in Pokemon. That gives us some idea just what pop culture will survive in the future as well as what won’t. Fun reading!

The story doesn’t stand still for very long at all, either! I love a pacing that forces me to hold on tight, and Killtopia #2 is even stronger in this department than the debut issue was! Mr. Cook continues to grab us by the short and curlies and not let go!

As terrific as the script is, the art truly sets the mood and the tone for this series. The hairstyles, the costumes, the backgrounds… they all make us feel like we’ve suddenly been transported into this strange and unusual world that is only a few steps away from our own.

I like to say that I look at two main components in artwork for a comic: 1. Action sequences, and 2. Facial expressions. The action sequences are truly dynamic. For instance, when Stiletto and Crash are in a fistfight, you could measure the blood by the gallon, and the fighting really made me wince. Then, too, when Stiletto is hurtling to her apparent doom, what do the TV people do? They bring on the actress who portrays Stiletto in the videos to get her reaction. Boy, that’s exactly what the networks would do even today! And the actress is smiling about it all! Yeesh!

This book is really a move into the future in story and art, so I loved it!

I know, I know… I’m a sci-fi kind of guy anyway, so this kind of thing will appeal to me anywho. Well, if you can just read Killtopia carefully, you’ll get so much out of this series that you just might become a sci-fi person yourself! It’s that engaging!

If you’d like more background on this book, be sure to listen to my interview with writer Dave Cook during Episode 321 of my podcast! He gives us a lot of insight about this title, something that I found very helpful.

This title is made available through BHP Comics. You can go to this link to access them. Sadly, I haven’t found them yet on comiXology or other digital sites, but they sure should be there! Very highly recommended!

Killtopia is a comic about where we are going and what we just might be doing much sooner than we figure. So look out!