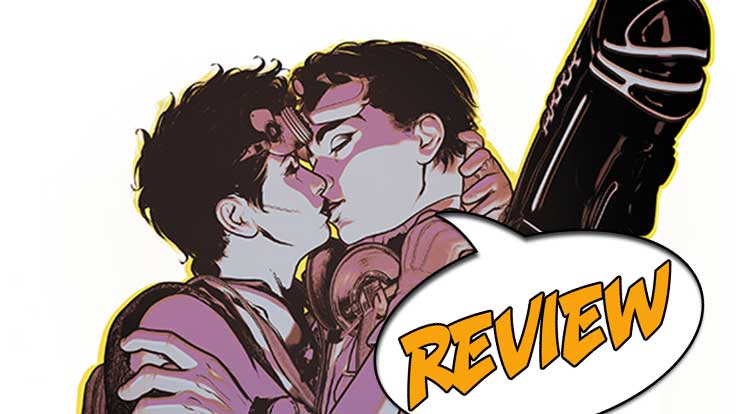 Sonata and Pau’s parents are in deep trouble and only their children can save them. But first, vows must be made and trust is tested. Your Major Spoilers review of Sonata #5 from Image Comics awaits you, after the jump. Previously in Sonata: The Ran, The Tayans, and The Lumani all inhabit the same world and as of late the relations have not been amicable. A tenuous truce is agreed upon so that a search can commence for Sonata and Pau.  Those two have been transported away and have found themselves in an ancient Lumani fortress.  The search party is betrayed by The Lumani and are now trapped in a valley filled with dangerous and powerful giants.

THE BIRDS AND THE BEES

Sonata #5 opens inside of the titular character’s mind. To her surprise her missing mother visits her but at the last moment transforms into one of the giants that populate the planet. In the waking world Pau, Korbys, and Treen discuss how to help Sonata, eventually agreeing to let Korbys use herbs to bring her back.  With time to spare Pau and Treen have a discussion. To the young Tayan’s shock, Treen has questions about how humans mate.  This leads to an uncomfortable conversation about their respective mating practices and relationships with the idea of gender. Treen then goes off and finds a crystal that reveals that Sonata’s and Pau’s fathers are both alive and trapped. Treen informs the party of this after Sonata wakes up.  They agree to go rescue them using The Lumani’s technology, but only after they swear to Treen not to tell anyone where they found it. They fly off and quickly arrive at the valley.  Treen uses some orbs to pacify the giants and put them back to sleep.  Sonata and Pau reunite with their fathers and keep their word to Treen.  The issue wraps up with a cutaway to the moon where a pod is discovered.  The group that made the discovery are surprised as it opens and Sonata’s mother climbs out.

Sonata as a series has had some troubles with pace and those troubles continue on here.  So much of the issue is devoted to conversation, but not a lot of it actually pushes the plot forward, then bam, bam, bam, the main characters zoom off, their parents are rescued with little difficulty, and everyone goes their separate ways.  The priorities here appear to be leaning more towards a mystery of The Lumani, rather than any current conflicts, which would be fine, but so far that mystery isn’t very interesting.  The one consistently good aspect of this series, and this issue as well, has been characteristics of the three races in play and how the children have them, but also reject them in specific ways. Also, the conversation about mating and gender was well done and fun to read.

Brian Haberlin has a knack for drawing some really nice faces and Sonata #5 has plenty of examples of this talent. Throughout this issue there are many closeups and a lot of panels with two people facing each other and it’s evident that a lot of thought was put into the look of each character.  The coloring in this issue is some of the best out there right now, the usage of black and the shading makes every panel look like it could be a cover.

While Sonata #5 does come off as a wrap up to the initial plotlines of the series, they weren’t done in a satisfying way. The book is still great to look at, but the writing has a bit of ground to make up to match the art. 3 out of 5 stars

Sonata #5 suffers from pacing issues throughout. The conversations go on for too long and the rescue at the end has no tension and is squeezed in as a quick way to wrap things up. The art remains top-notch though.