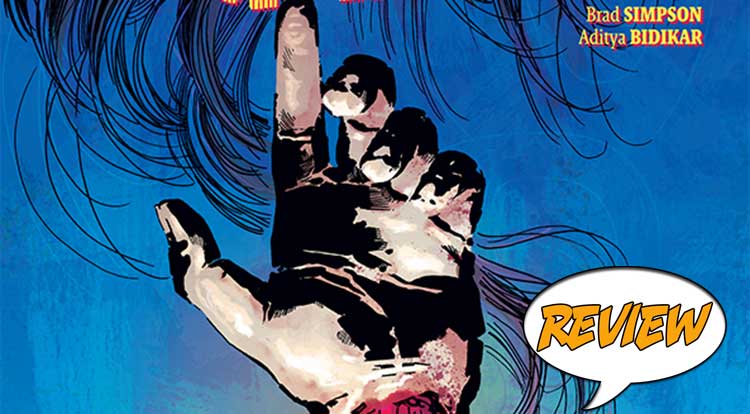 On the run, with a vulture for company and a pair of eyes in a glass jar, Izzy continues her quest to erase all signs of her existence to escape.  Opening with a chase scene out of a Goya-esque nightmare, with the EarthEater on her trail, can she achieve her goals and escape with her life? Find out in our Major Spoilers review! Previously in Coffin Bound:  The EarthEater, a potent blend of myth and monster, is on Izzy’s trail.  Seeking to escape, Izzy goes on the run, erasing as she goes all signs of her existence in a despairing effort to escape her seemingly inevitable fate.  Along the way, she acquires a talking vulture as a companion – which isn’t the weirdest thing that’s happened to her so far.  Meanwhile, Taqa joins a strip club, and learns that it’s not only her clothes that she will end up removing.

I’ll be frank, guys.  I’m not 100% sure I fully understand what was happening in Coffin Bound #3.  But I do know I liked it, very, very much.  Writer Dan Watters and artist Dani have put together a fine issue that blends symbolism, myth and some of the most striking art you will see in a comic book today.

A heady blend of symbolism and compelling artwork, Coffin Bound is a singular title that matches a compelling storyline with stunning visuals.
If you open a comic with a man having his eyeballs removed, and close with the skinning of one of the supporting characters, the reader knows soon enough they’re experiencing something – certainly striking, perhaps profound, but definitely memorable.  Izzy is on the run from a monster called the EarthEater, a creature seemingly composed of fetish wear and a monstrous appetite.  Taqa has entered a strip club, where the use of nerve blockers and razor sharp implements, plus a handy skin restorative, allows the ladies to take off more than their clothes.

It’s all hard to describe in any coherent way, but like the best dreams, with their crazy logic and impressive visuals, Coffin Bound #3 is simultaneously disorienting and distressing – and in a good way.

Where to start?  Watters’ writing reaches for profundity, and sometimes makes it, but for most of the time, the oblique writing is less frustrating than compelling.  We’re never quite sure what is going on and why, except at the most basic level.  Izzy is on a quest…to erase every sign that she exists.  Can she succeed?  The title of the book suggests no.  Taqa is angry with Izzy for treating her like a kid, so she does the most adult thing she knows and heads for a strip club.  But beyond that, there are questions of perception, prophecy, existence and ultimately death for the characters and the readers to ponder.  Izzy and Taqa, as different as can be, are both searching for the same things – meaning in meaningless world, and a chance to find safe harbor as the storm clouds come racing in.

The really big buzz about Coffin Bound comes from the distinctive art of Dani.  After creating a stir with an ashcan release of #1, Dani kicks it up a notch, especially in Coffin Bound #3.  There’s a dirty feel to the artwork – there are no clean lines, just awkward poses, odd angles and a color palette by Brad Simpson that emphasizes the rundown feel to the world of Coffin Bound #3.

Of note are the scenes in the strip club, where several of the ladies circle Taqa in a predatory fashion.  Dani conveys the scuzzy atmosphere, the shadows and the half-light, the sensuality of the women, and the taint of blood in the air.  When one of the strippers demonstrates the club’s unique calling card, by degloving one of her hands, a simple set of three panels provides the most disturbing imagery of the issues.

Coffin Bound #3 is a compelling issue, even if it is an at times confusing read.  Dan Watters might’ve made a concession by making the storyline slightly less opaque, but that would’ve diminished the mystery and power inherent in the writing, so I’m glad he stayed strong and maintained his vision.  Watters and Dani have created something remarkable here, a blend of distinct characters and some startling artwork that lingers long in the memory and the eye.

All flesh is grass and none more so than in Coffin Bound #3. Striking visuals and evocative writing combine to layer doom upon doom, with the promise of blood, pain and madness around every corner.