Beast Kingdom has been knocking it out of the park with Marvel action figures, and in August of 2020 – yes 2020 – Captain Marvel lands in comic book stores. With an EAA stylized design and intricate paint detailing, this special PREVIEWS Exclusive EAA-075SP Captain Marvel stands 6” tall and comes outfitted in the green Star Force uniform seen in the hit Captain Marvel film! Featuring 22 points of articulation and an assortment of accessories, Carol also includes interchangeable hands, an LED light up function in her alternate helmet head, and a figurine of her adorable “cat” friend Goose, who is in the midst of swallowing one of the infinity stone cubes! With a strong focus on detail, the EAA-075SP Captain Marvel is the perfect addition to the growing roster of Earths Mightiest Heroes in the Egg Attack Action line. 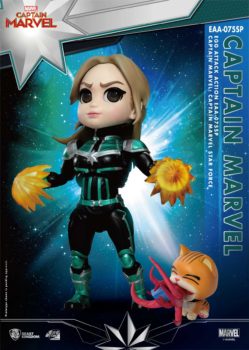 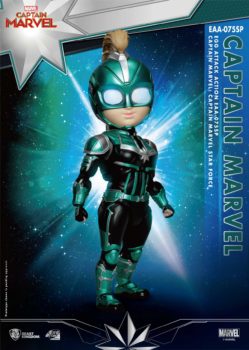