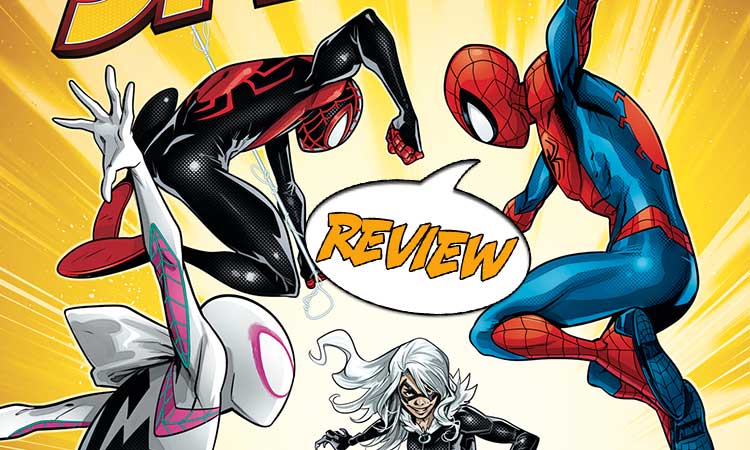 Our trio of arachnid heroes are on the hunt for a stray cat… burglar that is. Will they be able to work together to declaw the Black Cat, or will their egos get them cat scratch fever? We find out what is going on in MARVEL ACTION: SPIDER-MAN #9 from IDW Publishing. Previously in MARVEL ACTION: SPIDER-MAN: Peter Parker and his amazing friends, not those guys, have made an enemy in the form of the villainous Black Cat. It seems they have strayed into her plans, and she does not have time to tolerate their interference. After some help from Miles friend Ganke, they have tracked her down to her lair brownstone, determined to help her see justice, or possibly, just to take back some of that bad luck.

The after the events of last issue, Peter, Gwen and Miles are ready to try a different approach with confronting the thief known as Black Cat. In the interest of possibly avoiding her bad luck powers, they decide that a stealth approach is needed. Disguised as a flower delivery guy, he just put on a hat and found some flowers, Peter arrives at the home of the Black Cat and delivers her not only a lovely bouquet of flowers, but also a spider-tracked with which the team can listen in on her activities. The threesome learn a tough lesson: surveillance is not exactly as exciting as swinging from a web across town while battling a super villain. So after a lot of listening to cat talk and fighting boredom, Peter finally gets the big break during his turn monitoring. She plans to break her father out of jail the very next night. Meeting in the park over bagels, they discuss not only the furious aspects of the two feline cats, but eventually begin to formulate a plan, one which totally does not involve simply calling and warning the police… which they totally didn’t do. Okay, so they did, but it was worth a shot! After much discussion, they finally decide they must find a way to negate her bad luck powers, which means traps and distractions!

A long brewing problem begins to arise that night, however, as circumstances bring feelings of pride and being under appreciated to the forefront. Will the Spider Team be able to overcome their differences in time or will the Black Cat turn the team to kitty litter?

A TALE OF DONUTS AND COFFEE!

The conclusion of the Black Cat story line is as good as the issues leading up to it, and that is largely due to the writing of Delilah S. Dawson (Sparrowhawk, Star Wars Adventures). Dawson was the initial writer on the series, and after a short break for the Kraven the Hunter storyline, returns with a great story of the Spiders first meeting with series regular The Black Cat. Dawson does a great job with the cast. She gives each character their own voice and feel, which is a commendable thing considering how prolific the trio is in the normal Marvel Universe. Here, in their Marvel Action title, they read like teens, which is as it should be. Their problems are those of teens and their solutions are those of teens. Dawson addresses the issue of three characters who essentially have the same powers (almost), share similar names, and even have derivative looks. It would be easy to write them as three heads on the same character, but she takes the time to invest in each of them their own personality. The ever-responsible Peter, the resourceful Miles and the rebellious Gwen. All three main characters, while different from their primary Marvel Universe counterparts, are endowed with the same basis, but in an appropriately youthful form. Dawson does this excellently, and makes the complete reading experience enjoyable.

Adding to that feeling of youthfulness is the art by Fico Ossio (Critter, Skylanders). He draws the teenage protagonists as just that, teenagers. Their appearance, their expressions and interactions, it all conveys the fact that these are not just little adults with powers. The characters convey the indented emotions of Dawson’s script, while giving us excellent art.  I am also of the opinion that Ossio has a great artistic partner in colorist Ronda Pattison (Teenage Mutant Ninja Turtles, The Maxx: Maxximized). She is a veteran colorist who has experience with many different artist who are similar to Ossio’s youthful style. Her color choices enhance the art, and this issue has some great examples of how the colorist can make or break the page. Take at look at the confrontation sequence between Peter, Miles, Gwen and Black Cat. While the black and white art is most likely wonderful, Pattison’s colors contribute a depth and life that complete the action on the page, grounding it in a solid setting.

As far as final issues go, this is a great end to a fun storyline. The dynamics between the three main characters is addressed in a new way and they, at one point, seem to be opening up and become more accepting of each other and their situations. Overall, even as a final issue to a three-issue storyline, it gives satisfaction on its own and is a wonderful way to cap off the Black Cat storyline.

MARVEL ACTION: SPIDER-MAN #9 caps off a great storyline and sets up some excellently executed character development for the heroes.

MARVEL ACTION: SPIDER-MAN #9 delivers the action packed punch needed to keep it in the ranks of a top caliber Spider-Man title.