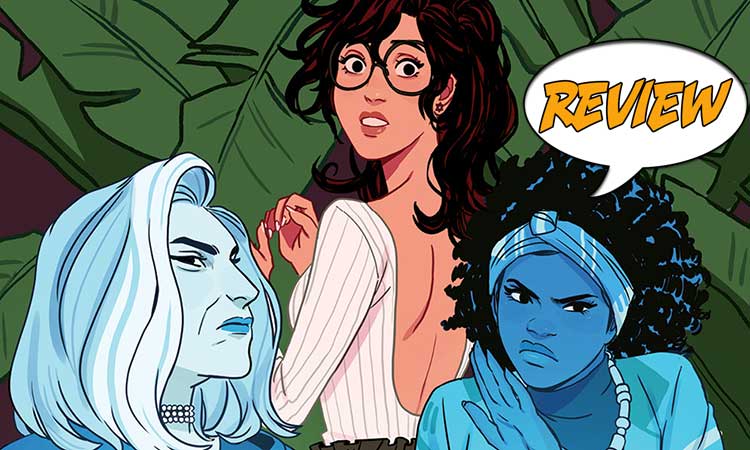 It seems that Daphne can’t help inadvertently breaking the rules of Rycroft Manor. Can she ever make it up to Agi? Find out in Ghosted in L.A. #4! Previously in Ghosted in L.A.: Daphne’s ex, Ronnie, arrives at Rycroft Manor, and their heated discussion attracts the attention of some of the ghosts. On a class museum trip, Bernard materializes by Daphne and convinces her she needs to talk to Ronnie. She does so and braces herself to hear all about his new girlfriend when instead he tells her that he is gay. Bernard, who is also gay, materializes and the two of them talk. All of this is too much for Maurice, who bursts in on Daphne and attacks her!

Considering where last issue ended, it’s appropriate for Ghosted in L.A. #4 to begin with Maurice’s story, which is that of a lonely man, who is lonely in part by choice. In a single page, we see that he is selfish and particular, and he is not someone who will try to change. We focus on a scene with his sister. She lives only an hour away, but this is still too far for him to visit. He won’t even meet her halfway and is glad when she leaves. That night he slips and falls while preparing for a bath, and he is not found for three days.

Bernard tells Ronnie his own story, and Ronnie seems really glad to have someone he can talk to. They’re interrupted by the ruckus of Maurice and Daphne. Maurice admits he’s a ghoul and hints that he intends to eat her. The fact that she annoys him drives him on. She flees, trying not to get cornered. Ronnie is all set to go help her, when Bernard holds him back and tells him it could be dangerous. But Ronnie is clear on one thing – when a friend is in trouble, you go to help, so he does and draws Maurice’s attention to himself.

Ronnie ends up in the swimming pool, but the commotion attracts more of the ghosts. Boyd steps in – and psychically gets into Maurice’s head for a moment while Ricky runs to get Agi. While Daphne ends up on the roof and stands up for herself, Maurice tells her that Agi has been luring in victims for him to consume and people to die in general. Agi does come on the scene. Maurice expects her support but instead she calls him out for squandering his afterlife as he squandered his life and squashes him out of existence. Now that was a surprise.

Agi isn’t letting Daphne off the hook. Daphne confronts her about bringing Maurice people as meals. Agi stands up to her, saying that she doesn’t need to explain the decisions she’s made over the years to a young girl she’s known for only a week. And that is a point. But Agi has an errand that she needs Daphne to take care of for her.

Daphne gets up early to take the bus across town and buy a special bouquet. Along the way, she spots a record store, remembers her promise to Ricky, and picks one up for him. Then she goes to Forest Lawn Cemetery where she finds the grave of Sean Terrell Boyd and leaves flowers on it, recalling that one of the ghosts at Rycroft is called Boyd.

She races back as fast as she can only to find that a new ghost has arrived. The musician that Daphne is a big fan of, Zola Tesla, died and her ghost has shown up at the Manor. And that’s not the only upcoming complication in Daphne’s life. Remember her BFF from back home whom she keeps failing to connect with? Well, she may be on her way to L.A. now.

Ghosted in L.A. #4 falls right into rhythm with the opening flashback of Maurice. Here we’ve been wondering why he seems like such a jerk, and it turns out that’s just how he’s always been. His presence adds something to the ghosts, though. Everyone else seems interesting, often somewhat shy, but mainly they mean well. They may be lost souls, but they’re still hopeful. Maurice, not so much. As a ghoul his face goes from angry to monstrous. He’s violent and cruel. Even worse, he relishes his violence. Because everyone else has seemed so benign, it comes a surprise when Agi dramatically takes him out, and the way she keeps her cool makes her feel all that stronger.

Daphne is very sweet as she makes her way to Forest Lawn. After all the craziness, it’s nice to see that she thinks of her friends and remembers them when she has a chance to think. I like the way this is setting up, not only for her to have to deal with the ghost of a musician she idolizes, but with the imminent arrival of the best friend she left behind.

Ghosted in L.A. #4 brings on the action it’s been building up to. One problem may be gone, but two new ones have been added to Daphne’s already complicated life. She’s a plucky heroine, and her heart is in the right place. And I love that the ghosts we’ve met have lives that mattered.

It isn’t all fun and games at Rycroft Manor – life is complicated, and ghosts are complicated.