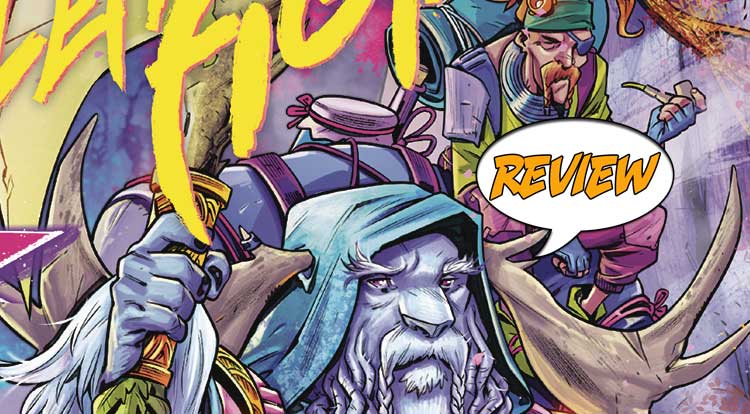 Vâle’s world tour continues as the hero and friends journey to The Arboreal Sanctum.  Your Major Spoilers review of No One Left To Fight #4 awaits! Previously in No One Left To Fight:   The iconic heroes of No One Left to Fight believe they’ve found a peaceful retreat, until they’re confronted by a monstrous threat from their past – revivified, improved, and ready to finish what he started.

As we open, Vâle, Timór and Krysta arrive at what SHOULD be the home of two of their oldest allies, only to find a mist-filled grove of trees and no sign of life. It soon becomes clear that Quon and Kaya, their ancient friends, were so tired of the endless rounds of fighting that they created a mystical veil to hide them from anyone and everyone, even their former allies, but the sight of Vâle and friends brings them out. There’s more tension between our lead and his best frenemy, more peacekeeping by Krysta and more warm reunions, while tension builds back at home between Timór and Krysta’s children. Just as they think that they’re going to make it all the way to their goal, the necromancer who has been skulking in the wings arrives with a warning about “corrosion” at Vâle’s core, once again hinting that he has a terrible wasting disease. As our out-of-practice warriors try to gather their forces, the creature revives Bruton, one of their most terrible fallen foes, and completely invalidates the title of the series.

FINALLY SOMEONE LEFT TO FIGHT

I’ve made no secret of my love of Fico Ossio’s art in this book, and this issue’s lush forests and vivid colors do absolutely nothing to change that. There’s so much character and depth in every panel, whether a closeup or the first views of the Arboreal Sanctum, and Timór’s anger when Kaya mistakes his wife for Vâle’s partner practically leaps off the page. When the terrible skeletal creature makes his move, it’s truly impressive (haven’t been that freaked out by a “zombie” since ‘Heavy Metal’), but the most beautiful sequence of the issue comes as Vâle dreams of his one, true desire: To live to a ripe old age. Sitterson’s story is still engaging, but four issues in, we’re finally seeing the tension breaking, and our first actual fight is upon us for the final issue. That’s very deliberate pacing, and it works, but I was practically ready to start a fight myself to get things moving. It’s not a a slow issue and it doesn’t feel like the proverbial “filler”, but in a book that is a limited series, I might have been a bit less methodical in getting to this issue’s climax.

BOTTOM LINE: I’M HOPING FOR MORE OF THIS

That lesser complaint is actually the core of my personal hope for this book: That there’s more coming. Vâle’s world and story are so full of potential, story hooks and characters that it would be a shame for five issues to be the whole story. No One Left To Fight #4 is another example of excellent art, engaging world-building and tension-ratcheting, leading to a cliffhanger ending that not only makes me want the next issue now, but to know when the next mini is coming, earning 4.5 out 5 stars overall. Even though I’m not a fan of many of the manga and video game influences of the book, this creative team makes it all must-read comics.

A book this gorgeous could get away with complete incoherence, but Vâle's story is a compelling one as well, making for a really impressive read and an excellent cliffhanger.