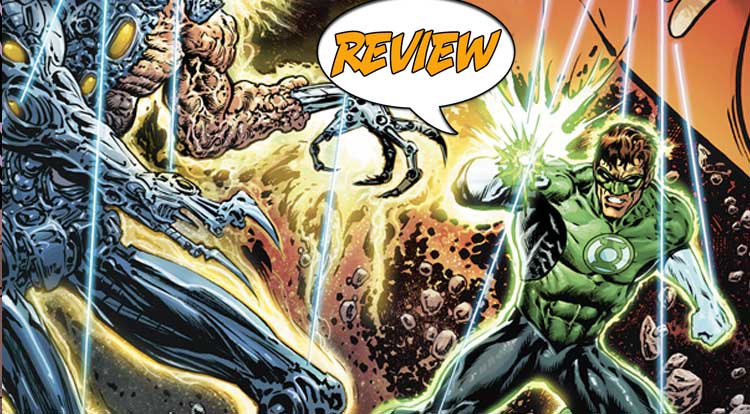 Hal Jordan versus Hall Jordan, with the fate of the multiverse in the balance!  Your Major Spoilers review of The Green Lantern #12 awaits! Previously in The Green Lantern:  The Green Lanterns will fall!  Insidious plans meticulously long set in motion have now reached their boiling point.  As defeat looms for the Corps, Hal Jordan’s showdown with his monstrous antimatter counterpart sets the stage for a moment that will echo throughout the entire DC Universe!

Trapped in the No-Zone, deep within the Antimatter world, Hal Jordan speeds towards a slaughter.  His antimatter duplicate, the cyborg monster called Qwa-Man, has devastated a contingent of Lanterns in horrible ways (and this is Grant Morrison, so y’know I mean terrible) forcing him to fight a twisted version of himself.  His fight is nearly fatal, but for the intervention of an alternate version of Sinestro, who in this world isn’t a fascist jerk but a self-described lovable rogue.  With Sinestro’s help, Hal is able to regroup, but their new strategy seems to be simple and stark: Hit him til he dies.  It’s successful, but it leaves Hal with only the tiniest sliver of Lantern power in his ring, and costs the life of one of his compatriot Lanterns.  Of course, that’s complicated, too, as she turns out not to be crystal-person Chriselon but a shap-shifting Blackstar sent to protect him.  Before they can strike the final blow, Hal-Kar and the United Planets Super Watch take the creature into custody and return him to the Anti-Matter Universe, as Hal Jordan realizes…  He’s been set up.

As the issue ends, Hal is in the custody of The Blackstars, who want him to rejoin them as Blackstar Parallax.  These guys were, in the previous timelines, known as Darkstars, but somewhere along the line, that changed, and it’s unclear why they want him to help them build/rebuild The Miracle Machine or why Controller Mu wanted him in their numbers so badly.  It’s a very complex story, with a lot of moving parts, and is the big cliffhanger for next month’s launch of the 3-issue ‘Green Lanter: Blackstars” mini, so I’m kind of in the dark about a lot of the plot.  That said, it’s utterly fascinating, and Morrison’s trademark use of completely abandoned elements of continuity (Superboy’s big brother Hal-Kar, aka Halk-Kar was nothing but a one-shot Mon-El prototype for years, whereas Strong-Woman, Aeroman and others made single issue appearances decades ago) has made this book a must-read for me.  Add in Liam Sharp’s art, which combines precise lines with an almost manic inking style (which makes every action sequence pop with dynamic energy), and you’ve got a Green Lantern book that finally breaks the cycle of “various Corps fighting each other” in which we’ve been stuck since 2006.

Sharp’s wild alien designs are also much-appreciated, referencing old-school Lanterns and existing races while creating entirely new visuals, making for a book that gives personality to even the single-panel Green Lantern appearances.  The Green Lantern #12 makes great use of decades of cosmic DC stories, weaving a Green Lantern tale that even makes me appreciate Hal Jordan (while still expressly mentioning that he’s a loose cannon who can’t take orders) with excellent alien art to make it all sing, earning 4.5 out 5 stars overall.  Heck, I want a United Planets Super Watch miniseries, assuming any of them survived the antimatter-universe.

A lot of moving parts make for an exciting, if occasionally obscure, story that combines with Sharp's artistic chops to make for a great GL tale.