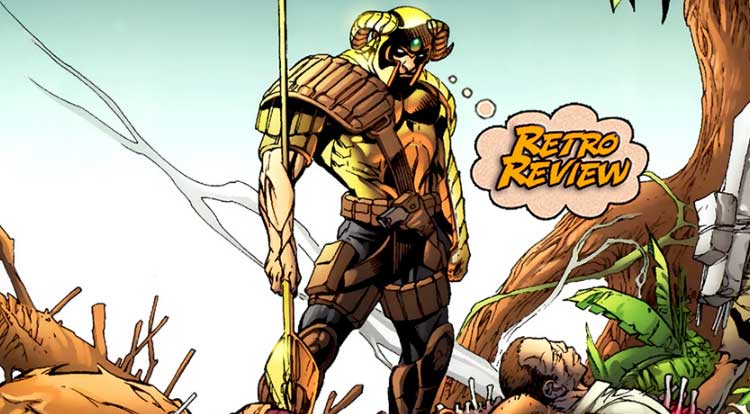 Intentionally designed to be a bad character, somehow Magog got his own solo series?  Your Major Spoilers (Retro) Review of Magog #1 awaits! Previously in Magog:  Former marine Corporal David Reid was empowered by an alien artifact and joined the Justice Society of America as Lance, their latest legacy hero.  (He was the great-grand-something of President Franklin Roosevelt, who assembled the team back in the 1940s.)  An encounter with an alien creature called Gog transformed him into a more powerful form but also altered his perspective on the world to the point where he was expelled from the JSA.  Now, he’s travelingt the world looking for problems to fit his particular violent brand of solution. On the one hand, the question of how superheroes can allow real-world atrocities to continue is a good one and one that could make for some interesting storytelling, but it’s also the kind of question that can easily unravel the logic of your world.  As Magog encounters a horrifying massacre in the Sudan, he responds with 90s-style tough-guy dialogue and snarling machismo.  “Suffer the little children to come unto me,” he snickers, followed immediately by “Booyeah.”  That’s…  unfortunate. I am a huge fan of Keith Giffen since roughly 1982 and I have to tell you, this issue’s dialogue just pains me.  Magog discovers that a group of mercenaries has stolen “wonder tech” (the leftover detritus of giant robot fights and crashing satellites from the JLA) and is using it to better kill the natives, zombifying/cyborgizing them into loyal pack horses for their illict activities.  It makes him incredibly angry, but everything in this issue seems to have the same effect, including a visit from one of the elder statesmen heroes. Howard Porter delivers a really impressive Green Lantern here, and his warnings to Magog to not rush off half-cocked and kick in the ol’ swift and blinding violence falls on deaf ears.  After his exit, Magog sneers that “Green Lantern Lite” won’t stop him from delivering bloody justice, a moment which just feels… wrong.  Sure, differences of opinion between heroes are necessary for drama, and Magog being disrespectful to authority is literaly baked into his character circa 2009, but this doens’t feel like “old fogey giving unwanted advice” so much as “dangerous hero ignores veteran to do whatever the hell he wants.”  Is it intentional?  I’m not sure, but the rest of the issue doesn’t seem to be trying to tell us that Magog is wrong.  We get the slightly entertaining moment wherein David meets up with his secret “tech guy”, who turns out to look and talk like Larry The Cable Guy, before we smash-cut to a bad part of Los Angeles and a gang hideout. Adding to this book’s absolute 90s vibe comes the attack on a group of drug dealers straight out of central casting, ending in some really intense ultra-violence (which, to be fair, looks really good under Porter’s pen.)  This is a transition to Magog starting a fight that he doesn’t even want nor believe that he can win for reasons that don’t quite make sense. There are some flashes of brilliance in this comic (notably, that final panel is the best this character has ever looked in any incarnation) and it does commit itself completely to the premise of “grimdark realism steeped in real human suffering and tragedy”, but there are two larger problems at play that Magog’s existence in the DCU never addresses: First and foremost, the character was expliclty created as a pastiche of all the 90s cliches to serve as a straw villain in ‘Kingdom Come’, meaning that every aspect of him is over-the-top, even for a faux-Wolverine.  The other is that problem of making Marvel-style street level realism fit with an undead super-cyborg warrior created by a pseudo-god, whose allies and associates include a nigh all-powerful alien powerhouse, a man who can make anything he imagines appear out of green magic energy and two men who can run faster than the speed of light.  In terms of scale, tone and appropriateness to the world in which it occurs, Magog #1 doesn’t hold together, and even the talents of these creators can’t quite put it all together, leaving us with a rather disappointing 2 out of 5 stars overall.  I honestly wonder if the point here wasn’t to show us how disastrous Magog’s attitude would be in play, much like Azrael-as-Batman was meant to make it clear that not everyone could be the Dark Knight.  Either way, I can’t believe that they brought this guy back in post-Flashpoint.

It's a really dark, cynical, angry comic with some okay art and a lot of things that I just don't enjoy from creators that I normally love.