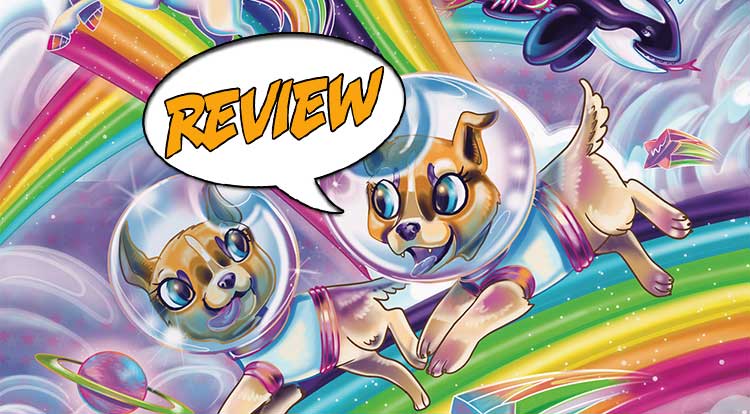 It’s love at first sight when Vess meets Dr. Echozar! Are things finally going her way, or does the cute doctor have hidden motives of his own? Find out in Star Pig #3! Previously in Star Pig: Teenager Vess has survived the crash that killed a bunch of young people on their way to space camp, but she (along with Theo the tardigrade) has been picked up by an alien spore cloud intent on selling them for a rich profit. From dramatic adventure, the story turns to goofy humor as Vess builds a makeshift body for the spore cloud to play around in, but which also captures him. She and Theo make their way to Beverly Hills Station (which is nowhere near Earth), and Vess suffers a concussion in the process.

Star Pig #3 is not a book that sticks strictly with any one genre in particular, instead preferring to play fast and loose with any that fit. Vess wakes up in sick bay with Theo at her side, observing that resting looks boring. Then Dr. Echozar walks in, looking like a blond teenage Earth boy, and Vess gets the big eyes and clouds of hearts around her, so we have no doubt she thinks he’s cute. Of course, she gets embarrassed when she realizes she’s in a hospital gown, but luckily Theo saved some of her clothes by ingesting them.

The humor is a little more puerile in this issue; some of it is still pretty good. Vess learns that she’s the first Earthling anyone here has seen, except for Laika (the Russian space dog), who has been cloned thousands of times over the last several hundred years. Dr. Echozar has a Laika, who shows up, mainly for Theo to joke about eating her. (I do like his line later about how everything is technically edible if you try hard enough.) To make Vess feel more at home, they synthesized stuff similar to what was on earth, including the hospital gown with the traditional breezy gaps.

Dr. Echozar takes her to the food court, and then offers to take her on a joyride and show her around. They apparently zip around Jupiter, Saturn, and Uranus (cue another childish joke), while still being far away from home for Vess. In a rare moment of introspection, she reflects on how she wanted to come to space to have more real experiences, rather than being hooked on VR.

They have a little time alone (leaving Theo out in the hallway) and share a kiss before Dr. Echozar advises Vess to nap. She uses a synthesizer to make comfy pajamas (complete with bunny-like slippers), and Dr. Echozar finally agrees to take Theo somewhere for some food. Or does he?

It’s a little discombobulating to go from space adventure right to romance here in Star Pig #3, but it is rather adorable. Dr. Echozar is so perfectly human that he has to remind us a couple times that he’s actually an alien (who happens to be fairly human compatible). For a culture that has never met an Earthling, they sure seem to be up on their Earth lore.

Vess and Theo break the fourth wall again with another montage, this time for synthesizer fashion. They cover several time periods on Earth, and it is awfully funny to see Theo in his nod to each era (wigs, hats or jackets, presented as only a slightly puzzled tardigrade can do). Throughout all these costume changes, Vess is totally cute. Her final outfit is skinny jeans and a t-shirt, with the few pieces of her original outfit that Theo was able to save. It’s a very relatable look, which I like.

BOTTOM LINE: A TANGENT INTO ROMANCE

Star Pig #3 takes a breath and slows down a bit. The romance thread is charming, but it feels a little odd to me with the intermittent reminders that there was an accident, people were killed, and Vess can’t get home. I think we’re at the point where the book is trying to be wacky and fun, but it doesn’t blend as well with the original dramatic tension that he had.

The outer solar system, where the humans and human, and everyone wants Theo the Tardigrade.