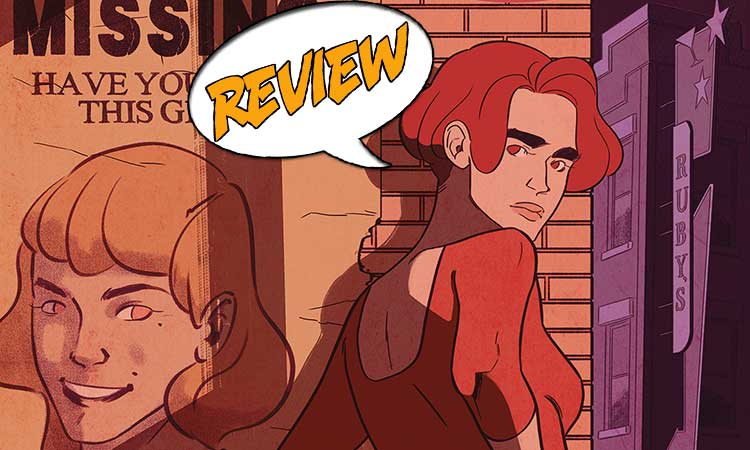 If there’s anything I love more than a murder mystery, it is an examination of the phenomenon of human memory. How well do these concepts blend together? Find out in Ruby Falls #1 from Dark Horse Comics. Previously in Ruby Falls: The town of Ruby Falls has its secrets, just as people all have their own secrets. Often women end up keeping secrets – their own, or those of others. What psychological toll might that take? And what if you have secrets, but you also have a failing memory? How can you recognize the truth anymore?

It is autumn as Ruby Falls #1 begins, with Lana practicing trapeze with her girlfriend Blair. In a few panels, we learn that Blair is an accomplished acrobat and Lana is impetuous, and after she releases the trapeze at the wrong time, falling into the net, Blair has a talk with her about trust – something else that ties in with secrets and memory. Lana uses an expression about the river running red, related to mining, which is how Ruby Falls got its name.

One can’t help but see the connection with blood, especially in the next scene when we meet Lana’s dad, who is a butcher and whose apron is covered in blood. He’s proud of the family business, and would love to have Lana work with him, at Blake & Sons. Sons. Thus starts another thread of the tale which concerns the treatment of, and limited options for, women throughout time.

Lana next stops at the Senior Care center where her grandmother, Clara, has been having a bad day. Clara has dementia. Lana is working with her to try to keep her memories fresh, but Clara knows that the more you work with a memory, the more you change it; it may be a great memory, but it won’t be true any more. Lana films her as she recites who she is, as she complains about how her daughter, Greta (Lana’s mother) put her here and never visits, and talks about how Lana can’t stick to anything, especially a job.

Then Clara brings up a different memory, talking about when she was a girl and Gallagher, the man who owned the bar called Ruby’s, killed his wife. Women weren’t allowed in the bar, but she came in, and there was a fight, and he struck her down. Clara remembers mopping up the blood from the floor. And then she says, “Get out of town, Betty.” As she gets more upset, the staff ask Lana to leave.

Lana visits her mother who is the current proprietor of Ruby’s. She lives and works next door to her husband, but they aren’t living together. Lana asks her about one of the men from Clara’s story, who turns out to have been a mob enforcer, and her mother tells her not to visit Clara anymore. When we see Lana next, she’s at the library. Raymond, the librarian, is an old friend of hers, and he’s intrigued by the story of Betty Gallagher. She left Ruby Falls for the city, hoping to make it big as an actress, and instead vanished without a trace. Tabloids across the country picked up the story, mostly as a cautionary tale to frighten young women. How blithely does society do this, use lurid tales as morality lessons to keep some people in their place? But Raymond takes Lana up on her propose to try to solve this cold case.

We get another thread on women, as Blair works doing acrobatics on silks at a bar. The bartender doesn’t like it when Lana hangs out there because she makes his customers uncomfortable. Blair has this job for the money. She also doesn’t think Lana should pester her grandmother further about Betty Gallagher, but she does, and Clara gets upset and tells her it was all fiction. But then, on her way home with her file on Betty, Lana gets attacked by someone who tells her to quit asking questions.

BRINGING THE WORLD TO LIFE

The art of Ruby Falls #1 is clean and lovely. We see it right from the start. Blair, the acrobat, is beautiful and strong, and she’s drawn, both here and when she’s working on the silks, like an acrobat and not simply as a sex object. If anything, it makes her sexier because we can see she’s doing something she loves and that she does well. This care is taken with characters throughout. Pay attention to Clara. As someone with dementia, her emotions are heightened and changeable. How quickly she goes from bored to excited to troubled and even somewhat cagey.

The coloring choices are lovely as well. I like the depiction of autumn with the warm tones and traces of falling or fallen leaves. That’s just one of many details that fill in the town, making it come alive and feel as though it could be a real place. After the story of Betty, night comes on and the palette shifts to cooler tones and the art picks up stark shadows that really bring a noir vibe to the book.

A cold case, such as the one presented in Ruby Falls #1, is of course a blend of mystery and memory. But memory is ephemeral, and there may be an enormous divergence between actual truth and remembered truth. The story here is intriguing and it his all the right notes.

A normal autumn day triggers memories of murder – but, vivid as they are, are those memories even real?