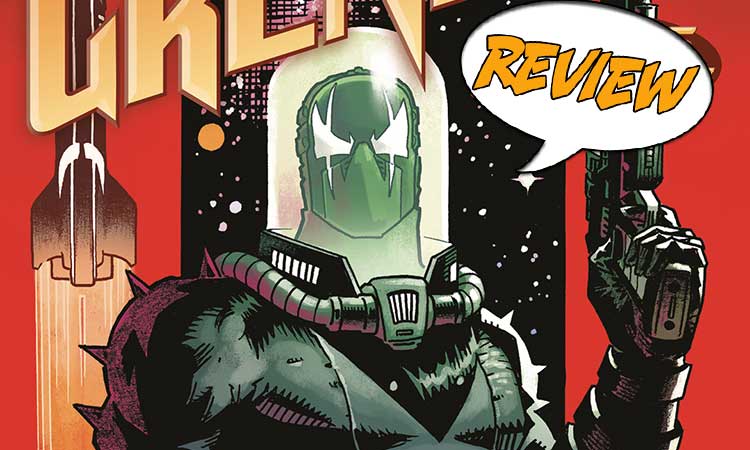 Legendary creator Matt Wagner returns to one of his most popular creations! Grendel Prime has emerged from seclusion and is on a new mission. The Earth is dying, and he must find a new home for humanity. Will Grendel Prime be humanities savior, or destroyer? Find out in GRENDEL: DEVIL’S ODYSSEY #1 from Dark Horse Comics. Previously in GRENDEL: A product of Grendel-Khan Orion Assante, the paladin known as Grendel Prime was a living weapon of destruction who was charged with the protection of Assante’s son, Jupiter. After he assisted Jupiter in the defeat of his mother, allowing his assertion to the throne, he disappeared. But that was then, and this is now, and the possible end of humanity is closer now than ever before.

SPEAK OF THE DEVIL AND HE SHALL APPEAR!

In the far reaches of space, a whole opens in the fabric of creation and a long, black, phallic starship slides out of the void into the universe of reality. The drone and a man are aboard the ship, although the man is not entirely a man, not in the normal sense of the word. Grendel Prime, the paladin of Orion Assante, the original Grendel Prime, is on a mission. His companion, a PDA device known as Sigma-Seven is his guide, and they are on a mission. Humanity is doomed, and the last Grendel-Khan, Juno II, summoned the Grendel Prime the palace. The enemies were at the gates, and Juno II wishes to use the last of their resources to send Grendel Prime on a mission beyond the Earth they know. Having broken ancient law, Juno II has ordered the creation of a starship, a nuclear powered vessel, to act as an ark. Besides Grendel Prime and the PDA droid, they will carry a precious cargo. Juno II is entrusting Prime with the preserved genetic material of Orion Assante, two of his sisters and two of his wives. With these building blocks, and an advanced cloning chamber, Grendel Prime is to find a suitable planet with which to start a new human race, from the bloodline of Assante. Heeding his duty, the paladin accepts the mission. As the last remaining forces of Juno II provide a distraction and clear a path, Grendel and Sigma Seven blast off into space in search of a new home for humanity. As his ship disappears into a warp, we return full circle to the start of our adventure and the ship lands on an alien planet, just barely habitable by humans. The quest for a new home for humanity is off to a rocky start, and Seven reminds Grendel that part of his charge was to find a planet to colonize peacefully. But looking out at the barren wasteland, that may not be possible, or preferable

DEAL WITH THE DEVIL AND BE READY TO BURN

It has been nearly five years since Matt Wagner (Sandman Mystery Theatre, Madam Xanadu) wrote and drew the Dark Horse/Dynamite crossover Grendel vs The Shadow. In that tale he returned to the original Grendel, Hunter Rose. It is only fitting then that Devil’s Odyssey be a continuation of the last Grendel, Grendel Prime. The time away from the character did nothing to diminish the uniqueness which the character holds, and it is almost as if I only just finished reading Grendel: Devil’s Quest. You can almost hear the disdain for which Prime holds the descendants of Orion and Jupiter Assante and humanity in general, but true to his character, he holds his duty higher than his feelings. Wagner manages to resurrect a feel of the late nineties and the unique aura which surrounded independent comics in that day. There is a raw audacity to the story which just breathes early Dark Horse. He did not try, in this first issue, to update the character or perform an info dump on the history of the Grendel’s, he presents it as is and without apology. From the afore-mentioned phallic design of the ship carrying the seed of the human race, to Juno II’s topless Grendel guard, he does compromise. This book is a wonder. Adding to the sense of legacy are the colors for the book, which are expertly provided by Wagner’s son, Brennan Wagner (Batman, Will Eisner’s The Spirit). His choice of color pallets helps the book with the sense of grit. Grit which cannot even be diminished as the paladin wields his purple laser sword. It still makes Grendel Prime look badass.

BOTTOM LINE: A VISIT FROM AN OLD FRIEND

On a personal level, Grendel was one of those series which took my young mind and showed exactly what the comic medium was capable of. Now, all these years later, Wagner and son have returned to show Devil is true to form, and just as exciting as he was so many years ago.

GRENDEL: DEVIL’S ODYSSEY #1 is one of those books which shows sometimes you can go home again. It is a solid space opera with a bad ass man in black protagonist that is sure to take you on a spin to that will leave your stomach in your throat, and your heart pounding to beat the band.

GRENDEL: DEVIL’S ODYSSEY #1 is a title which deserves to find its way into your pull file, make sure you hunt down a copy.