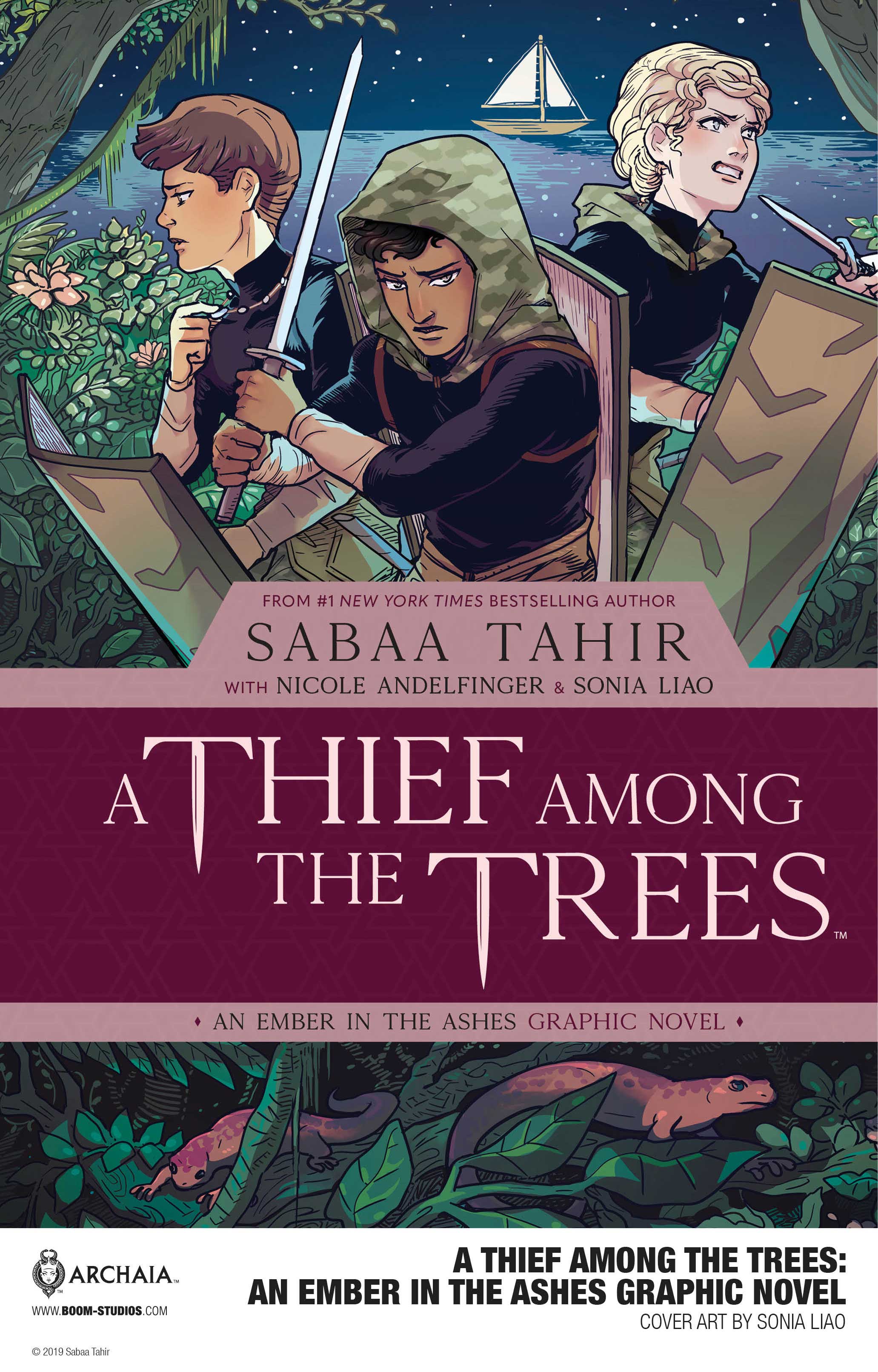 BOOM! Studios announces official prequel to Sabaa Tahir’s An Ember in the Ashes

BOOM! Studios is proud to announce A THIEF AMONG THE TREES: AN EMBER IN THE ASHES GRAPHIC NOVEL, the official prequel to the New York Times bestselling series of novels from creator Sabaa Tahir, writer Nicole Andelfinger (Jim Henson’s The Dark Crystal:Age of Resistance) and artist Sonia Liao (Kulipari: Heritage). A THIEF AMONG THE TREES will be the first graphic novel in a three volume prequel series that will explore the pasts of beloved An Ember in the Ashes series characters. Elias, Helene and Tavi are Fivers — in training to become elite military recruits for the Martial Empire at Blackcliff Academy. When they’re sent on a dangerous mission to steal a heavily-guarded poison on Isle South, they soon find themselves up against surprising enemies — including other recruits! As the true horror of their assignment is revealed, these three will begin to confront the harrowing realities of Martial rule, their place in the system . . . and the choices they must make to survive.

Sabaa Tahir is the author of the An Ember in the Ashes series. She grew up in California’s Mojave Desert at her family’s eighteen-room motel. There, she spent her time devouring fantasy novels, raiding her brother’s comic book stash, and playing guitar badly. She began writing while working nights as a newspaper editor. She likes thunderous indie rock, garish socks and all things nerd. This is Sabaa’s first graphic novel collaboration.

“I’ve loved graphic novels and comics since I was a kid thieving The Sandman from my older brother.” said author Sabaa Tahir. “It’s an absolute joy to use this medium to explore the life-altering events that helped shape EMBER characters like Elias and Helene. And working with Nicole Andelfinger, Sonia Liao and the team at BOOM! Studios to bring these characters to life has been an inspiring and joyful collaboration. I’m so excited for readers to discover this new piece of the EMBER world.”

Nicole Andelfinger is a comic book writer who has written for series such as Jim Henson’s Dark Crystal: Age of Resistance, Adventure Time, Regular Show, Rugrats, and Steven Universe from BOOM! Studios, as well as the Munchkin series for Simon & Schuster, based on the popular card game from Steve Jackson Games.

“Sabaa has created something truly inspiring with her An Ember in the Ashes series. Relevant and thought-provoking, the story is one that continues to stick with me,” said writer Nicole Andelfinger. “It was an honor to work on A THIEF AMONG THE TREES and to help Sabaa bring this story not only to long time Ember lovers but also introduce this deep and poignant world to new readers as well.”

Sonia Liao is a comic book artist based in Westford, Massachusetts. After graduating from MICA with her BFA in Illustration, she completed an internship at Fablevision and began life as a freelance artist. She’s done work for publishers such as BOOM! Studios, Sourcebook Fire, Red 5 Comics, and Global Tinker.

“An Ember in the Ashes has such a rich world and history — truly the best part of any fantasy story! Elias’s, Helene’s and Tavi’s different worldviews give their interactions dimension as they strive for the same goal. The setting may be restricted to a single island, but from the characters and story you can tell there’s a greater world beyond,” said artist Sonia Liao.

A THIEF AMONG THE TREES: AN EMBER IN THE ASHES GRAPHIC NOVEL is the latest release from BOOM! Studios’ ambitious Archaia imprint, home to graphic novels such as Mouse Guard by David Petersen; New World by David Jesus Vignolli; Jane by Aline Brosh McKenna and Ramón Pérez; Persephone by Loïc Locatelli-Kournwsky and licensed series including Lev Grossman’s The Magicians: Alice’s Story, Jim Henson’s The Dark Crystal: Age of Resistance, and Jim Henson’s Labyrinth: Coronation.

“Sabaa’s vision established in her incredible novels is compelling and addictive reading, and that experience continues in these lush pages scripted by Nicole and illustrated by Sonia,” said Sierra Hahn, Executive Editor, BOOM! Studios. “We are honored to explore this rich world and bring these complex characters to life in an exciting way with this graphic novel.”

Print copies of A THIEF AMONG THE TREES: AN EMBER IN THE ASHES GRAPHIC NOVEL will be available for sale July 2020. Digital copies can be purchased from content providers, including comiXology, iBooks, Google Play, and the BOOM! Studios app.