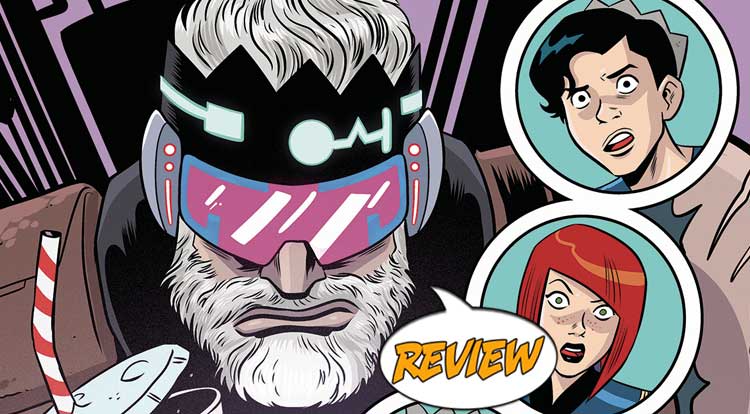 On the run from Jughead, the only man who can save Jughead is…  Jughead?  Your Major Spoilers review of Jughead’s Time Police #4 awaits! Previously in Jughead’s Time Police:  Jughead is stranded on a desolate timeline, one without burgers, or hot dogs, or any meat couched in bread.  He’s got to find some way to get back to the future to prevent an all-out war between the time streams…  but can he do it alone?

January McAndrews’ ploy was never to save Jughead, but in fact to remove him from the timeline, as he is meant to be the center of the end of all that is, but now she and 40s Jughead (who talks in some seriously nonsense 40s slang) are going to track him down and destroy him once and for all.  Fortunately for Jug, there’s more than one duplciate of him in play, and his own future self managed to pull them both out of the timeline entirely.  Of course, that means their stranded in a desolate, dead world and future Jughead believes that it’s all pointless, anyway.  There’s not way to win, he claims, and so they’re going to enjoy the last burger in existence together.  40s Jughead is no slouch in the cleverness department either, and pulls Werewolf Jug (from ‘Jughead: The Hunger’) to track his doppelganger down, which cues January that she’s not only hunting the wrong Forsythe P. Jones, she’s ALLIED herself with the one she should be hunting down.  When Werewolf Jughead finds Jughead and future Jughead, the try to fight him off, only to be confronted by 40s Jughead and an army of very familiar faces (including Captain hero and  Zack and/or Cody from the ‘Riverdale’ TV show.)

THEY’RE ALL HERE AND THAT’S QUITE AMUSING

The idea that 40s Jughead wants to live all his alternate lives, most (if not all) of which we’ve seen in various Archie books and productions over the years, is a fun one, and it’s interesting to see them all in play.  There is some confusion for me in that the story treats different artists’ takes on the current Jughead as separate instances, but the presence of ‘Afterlife With Archie’ Jugdead and Captain Hero make me forigve some of that.  The 40s-style dialogue might have been too much until Jughead and Future Jughead have a fun exchange about how, yes, they all talk corny like that, but it’s part of why people love them.  Speaking of love, Jughead convincing his dystopian future self that there’s hope by invoking the Archie gang is pure old-school Archie schmaltz, but it works for me.  I missed a couple of issues of this book, but I have already marked them for purchase and will be coming back for next issue’s big ending based on the strength of this issue’s presentation.  I am really impressed by the vrersatility of Charm’s art in these pages, being able to give us Francavilla-style zombies, traditional Archie cartoony characters and futuristic parody Jughead successfully, but the real kicker is the photorealism of TV Jughead, showing off his range and creativity.

I really enjoyed Jughead’s Time Police #4 as a story in itself, and while it does lean hard into both the parody of the 90s series and the meta-joke that Jughead continues to be reworked and revamped, it does so with surprising humanity and some very versatile art, earning 3.5 out of 5 stars overall.  As a fan of multi-Doctor stories and endless universal crossovers like ‘Spider-Verse’, this book is right up my alley, but if you’re looking for a book that balances fun, drama and meta successfully, it may be for you as well.

It's a clever premise made more fun by the fact that all the alternate versions actually exist, making for a great penultimate chapter.