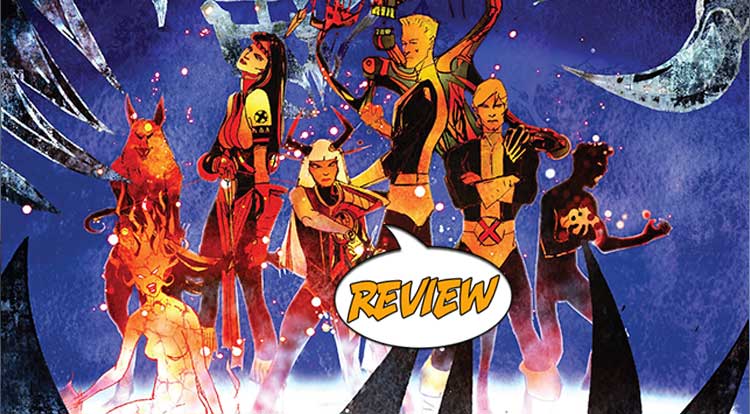 Once upon a time, there were nine young mutants who were their own worst enemies.  Your Major Spoilers review of New Mutants: War Children #1 awaits! Previously in New Mutants: War Children:  When Warlock experiences a nightmare, he begins going haywire, and it’s up to his friends to save him!  But as Warlock grows more frenzied, they should be worrying about being able to save themselves… and doubly so when Magik’s inner demon, Darkchylde, threatens to break free!

THE ORIGINAL TEAM (AND ONE ANGRY KITTY PRYDE)

A loooong time ago, I bought the New Mutants issue that debuted Warlock, featuring the unique and weirdly beautiful art of Bill SIenwkiewicz.  Now, as part of Marvel’s 80th Anniversary celebrations, we get an untold tale of those New Mutants, sometime after issue #21 or so.  This story opens with the team sleeping peacefully, only to be awakened by the sound of Warlock literally freaking out that he might grow up to destroy his friends and fleeing the X-Mansion.  The other eight New Mutants take after him, only to find him lashing out at them with his techno-organic powers.  Sunspot barely avoids assimilation, thanks to the late arrival of Kitty Pryde, but one by one the team falls to alien machine infection.  Things reach a fever pitch when Illyana “Magik” Rasputin is infected by the virus, only to have her demon half overpower it, leaving her with a terrible combination of infernal and alien powers and no human morality to hold her back.  Cypher manages to convince Warlock to calm down, convincing him that the future he fears isn’t set in stone, allowing the alien to reverse the process, returning his friends to normal one at a time, even overcoming Illyana’s demon before resolving as a group to blame it all on The Impossible Man.

OLD-SCHOOL IN THE RIGHT WAYS

Claremont’s 80s writing is a very specific beast, one that other writers have tried to recreate for years with no success.  Heck, anyone who has read ‘X-Men Forever’ knows that even he can’t always get it right, but this issue perfectly replicates his unusual dialogue and personality tics for all the mutants.  There’s more focus on Magick, Cypher and Wolfsbane than the rest of the team, but nearly everybody gets their moment in the sun this issue, with the requisite Vietnamese, Scottish, Southern or Russian accent.  Kitty Pryde is magically forced to wear a New Mutants uniform and best of all, the team feels like authentic, impulsive, emotional teenagers.  As for Bill Sienwkiewicz…  the art throughout this issue is perfect.  Synthesizing his modern skill with the peccadilloes of his 80s work, this issue features page after page of beautiful rendering.  A full-page shot of techno-organic demon Magik is poster-worthy, and a cute moment on the final page shows Warlock and Doug both shapeshifting to have part of the other’s face, foreshadowing the now-obvious reveal that their friendship has made them into a technological symbiotic pair.  (Anyone who tries to keep track of the various deaths and resurrections over the last thirty years can attest to the complexity of that relationship.)

BOTTOM LINE: I LIKE THIS A LOT (BUT THEN, I’M THE TARGET AUDIENCE)

Long story short, this comic features two masters of the form working with characters that they clearly love, making New Mutants: War Children #1 a joy to read, earning 4.5 out of 5 stars overall.  The only real drawback of this book is that it requires knowledge of 80s comics to really engage, but that’s a minor complaint with an issue that does such wonderful things with dialogue and art, making for a fitting anniversary celebration for one of Marvel’s under-represented X-titles.

A near-perfect time capsule featuring Claremont doing his Claremont thing and Sienkiewicz knocking it out of the park. This is a good one.