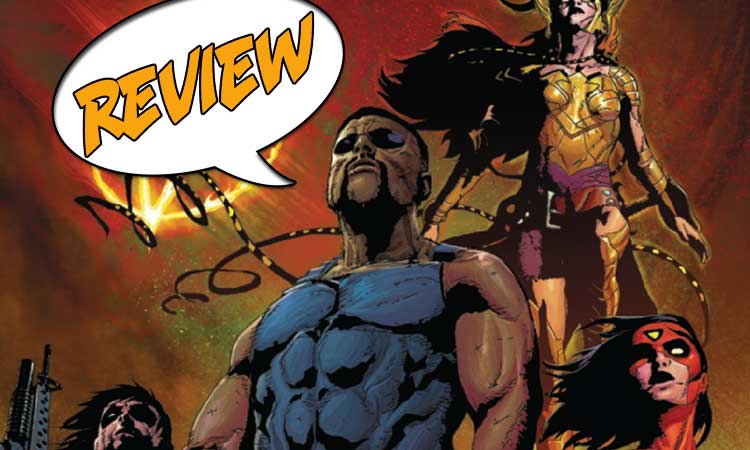 A group of heroes has been falsely accused and turning to their super pals would only make the true evil spread further. So, Blade and his pals are on their own and your Major Spoilers review awaits! Previously in Strikeforce: Angela, Monica Rambeau, Spider-Woman, Wiccan, Blade, and The Winter Soldier are a group of heroes that have little in common. But the powers that be have brought this group together in this title and they are  quickly tasked with tackling a threat that has ties to the recent War of The Realms event.

Strikeforce #1 opens up in a nondescript military base that is in the middle of a lockdown situation. Thankfully, The Avengers are on the scene and spring into action to help out.  It turns out that this particular base houses a bunch of diseases and they’ve been released. They make their way through the facility until they reach the source of the outbreak and to their surprise a group consisting of: Angela, Wiccan, Monica Rambeau, Bucky Barnes, and Jessica Drew. The group is arrested and put into a holding cell. Thankfully for them Blade is able to break them out of an Avengers prison. He explains that there is some sort of group of shape-shifters running around.  He takes the group to Indonesia where he thinks he’s tracked the villains to.  They are confronted by Doctor Doom, who they dispatch immediately and discover that it’s one of the shape-shifters.  Angela recognizes them as the Vridai, an evil group of fae that were released when The Black Bifrost was destroyed. The group is then attacked by a group of Vridai and they manage to fight their way through the horde until they reach the Vridai’s leader, Count Ophidian. The good guys and bad guys chirp at each other for a bit until Blade attacks and Count Ophidian raise a shield around himself. The others set to break the shield when suddenly Daimon Hellstrom pops in, apparently working for Count Ophidian. Blade is convinced that Daimon is one of the shape shifters and kills him.  That’s when he gets a call from Daimon’s sister, Satana who says that her brother has shown up at home, but is acting not like himself.

AN UNFORTUNATE COMBO OF CONVOLUTION, CYNICISM AND SNARK

There’s a whole lot of things that are off with this issue.  There’s nothing inherently wrong with bringing together a group of characters that don’t seem like they would go together. But, there needs to be a decent impetus for the team-up, and this issue doesn’t have it. It’s not really spelled out but it seems to be that these characters are brought together because of a combination of not liking shape-shifters, have a life that no one wants, are an Asgardian and not Thor, and are sarcastic. Also, it’s unclear just what exactly The Vridai are capable of or what they’re up to. At one point it seems like they are some sort of basilisk-esque virus of thought villain, which is why the other Avengers can’t know, but Blade is managing to do just fine. On the other hand they are changelings who need to kidnap their victims to turn into them. They are snappy dressers though.  On top of these issues is the general tone of the issue which is just cynical. All the characters come off as being uninterested in the plot.  Almost as if they (like the reader) have seen this sort of situation plenty of times. They even reference portions of the story that are cliche and that the other characters should be aware of due to experience.

I really question the necessity of this title. With The Savage Avengers and Kill Krew existing, having another “Avengers who aren’t your grandfather’s heroes” type group just feels redundant. I’d also be willing to say that the sort of dynamic that seems to be the objective with Strikeforce is done better in those other titles as well. Save for a couple of decent one liners and a somewhat humorous ending, there is just not a lot to enjoy about Strikeforce #1. 1.5 out 5 Stars

Strikeforce #1 is a particularly uninspired attempt at a particularly overdone and uninteresting type of book.  A lack of chemistry between unlikable characters mixed with an uniteresting villain and a poorly defined threat makes for a title that just doesn’t have a lot of appeal.