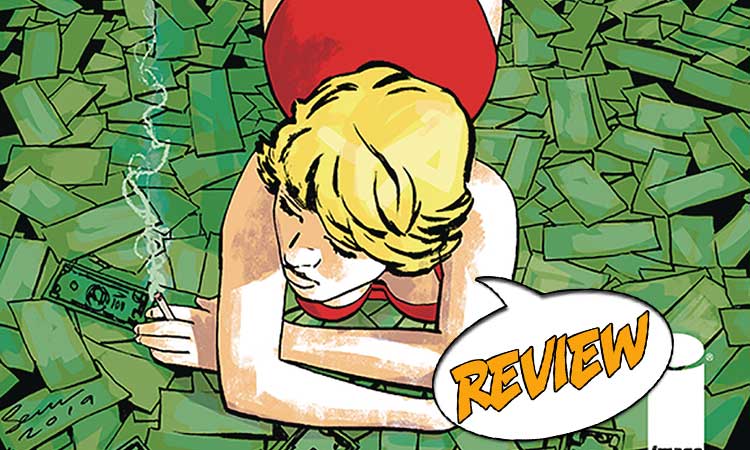 While Teeg Lawless and his cronies plan their next score, Jane pulls a thread and finds Ricky Lawless lurking, in the shadows, with a .38.  Who gets to pull the trigger?  Find out in your Major Spoilers review of Criminal #8 from Image Comics. Previously in Criminal:  Teeg Lawless has hooked up with serial seductress and good time gal, Jane, who is in not for love, but for the next big score.  Unbeknownst to them, on their tale is a lovelorn private dick with a thing for Jane.  Closer to home, Teeg’s son, Ricky Lawless, has begun to search for revenge on the one who done him wrong in juvie…

GIVE ME SOME SUGAR, BABE

Criminal #8, like others in this arc, takes a close look at each of the main characters.  This time it’s Jane in the barrel, the blond bombshell who’s hooked up with bank robber Teeg Lawless.  Teeg doesn’t realize that Jane is leading him around by the nose, and she’s keen for him not to wake up to that fact.  But she likes him, and even more, likes molding him into the vision of the man she wants.  Through writer Ed Brubaker’s script, we come to see Jane as less than a stereotype and more a full grown character, trapped by her past and condemned to look for men just like her damaged father, ironically to escape the life his mental illness condemned her too.

It’s great to see the writers focus on Jane – while noir movies do feature strong female characters, like Linda Fiortetino in John Dahl’s superb movie The Last Seduction – they seem few and far between in similarly themed comic titles.  Jane is a survivor, who knows all the tricks of the trade and yet has never managed to escape from the lifestyle.

Criminal #8 again features strong writing coupled with Sean Phillips artwork.  The pacing is top notch as the narrator’s voice follows Jane as she catches the subway, cops a light from a cop, and reminisces about duck and cover training when she was a child.  These innocuous images, which demonstrate yet again Phillips’ command of the form, are juxtaposed against the one-two punch of the revelations about Jane’s past.  Particularly how her father dug a bunker in the backyard against nuclear attack, then hung himself inside upon realising there was no protection on Earth that would save him.  Jane’s like her Dad – always on the lookout for that one thing that will protect her from the world.  There’s a stone in her stomach – the realisation that no matter how hard she hunts for it, there is no protection, and even though Teeg’s plan is coming together, all that money may not be enough to save her.

NUMB TO THE BONE

Criminal #8 features A-grade characters and storytelling providing an unmissable journey through the dark heart of the criminal underworld
Criminal #8 also features a little more of Ricky Lawless, who largely featured in the previous issue.  This time it is from Jane’s perspective, and the story takes a dark turn when we realise why Ricky has a .38 and intends to use it.  Again, we see the mastery of Brubaker’s writing and Phillips’ art – a sideways glance by Jane tells you as much about the character’s state of mind as a whole panel filled with text would do.  Jane is a fascinating creation – on the surface she’s all cool calculation, but scratch the surface and you reveal a roiling mass of uncertainty and fear, ever ready to burst forth in an eruption of emotion.

As always, there’s some fascinating endnotes by Brubaker to round out the comic, taking a look back at a recent Comic-con and future announcements of work.  Coupled with a review of the noir movie Ladybug Ladybug (which ties back to Jane’s childhood fears of nuclear war and worth a watch) and Criminal #8 provides value for money on all fronts.

There are few books as compelling as Criminal in the market today.  Along with being an acute character study, it remains a strong drama of peoples foibles, their weaknesses and strengths in an uncertain lifestyle that takes more than it gives.  Criminal #8 brings to the fore one of the series most interesting characters, and a woman to boot, someone who has had to do hard things to survive in a brutal man’s world.

Criminal #8 is a fascinating look at a pivotal character previously defined by how others saw her, now allowed her own time in the narrative sun to tell her story on her terms. And boy, is it sad and ugly.