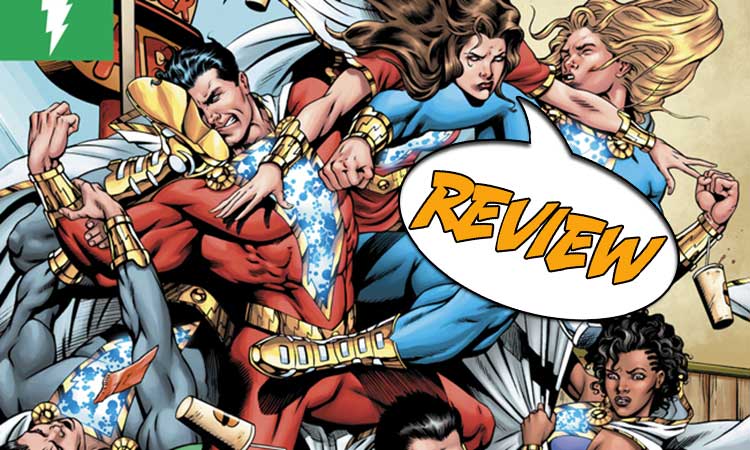 The Magiclands are no longer locked off and the Shazam family find themselves spread out through different worlds. Is this the opening Dr. Sivana and Mr. Mind have been waiting for? Find out in Shazam! #7 from DC Comics. Previously in Shazam!: the Shazam family is split up among the Magiclands. In the Funlands, Billy and Mary start a revolt in King Kid’s kingdom and attempt to flee to the Wildlands. Instead, they end up back at home where Billy’s dad is there to meet him. (He is out of prison, has now found Billy, and wants to find Billy’s mom.) This misrouting happened possibly due to a fight between Dr. Sivana and Black Adam. Freddy and Darla are in the Wildlands, and Eugene and Pedro are the in Gamelands, where they’re trying to get enough gaming points to leave. Things aren’t going so well for them, but then the Wizard arrives.

IT’S NOT ALL FUN AND GAMES

As Shazam! #7 opens, we’re following a White Rabbit with a pocket watch who is late in delivering an axe when he runs into talking trees and flying monkeys. These are the Wozenderlands, an apparently amalgam of Wonderland (as in Alice) and Oz (as in Dorothy). Things are looking grim for the White Rabbit, but the Wizard arrives with Eugene and Pedro in tow and looking for Alice. This is a detour the boys were not expecting. To be honest, neither was I.

On Earth, there’s lightning around the foster home. Billy’s father is quite sensibly concerned, and Billy concocts some ridiculous excuses to get him and the police out of the house for a minute while he checks on Mary. Mary has already revealed herself to Victor and Rosa, so Billy does too, and they break the news that all the kids are, in fact, superheroes. This also gives them a clever excuse to catch readers up on the plot by filling everyone in briefly on the Magiclands.

Meanwhile, in the Wildlands the tigers are having an interesting discussion. One of them is trying to talk the others into refusing to eat humans. The others point out that while humans taste awful, this is basically revenge for what their ancestors did in the war, and besides, they’ll be killed if they don’t. Freddy and Darla, for being human, are sentenced to be eaten by the tigers and thrown into the tiger pit where the dissenting tiger, Tawky Tawny, saves them, steals a suit, and takes them down into the subway where he knows about some portals, one of which should take them home.

As much as Billy wants to help his dad, the other kids are still out somewhere in the Magiclands. While Mary gets in touch with Wonder Woman, he will head back to find his siblings and get them out. Down through the Station he goes, where Dr. Sivana and Mr. Mind are waiting, invisibly, to follow him. They have set some sort of nefarious plan into motion already. And by the end of the issue, Feddy, Darla, and Billy are all in the Darklands, and Billy learns there is a traitor in his family.

One of the things I truly like about Shazam! #7 is the way the anthropomorphic animals of the Wildlands are depicted. While the heads and faces especially are those of animals, the bodies have some more human features so they can operate in this world. As an example, the tigers have hind legs that are more bipedal and proportioned more like human legs so they can walk on just the hind legs. Yet as they move and talk and pounce, their movement reads as tiger. And this care is taken throughout no matter what animals are acting. As an added bonus for the Wildlands, the talking trees are terrific! They’re gnarly old things, and those twists give them body language and it’s topped off by interesting faces.

Maybe it’s because of the contrast with the animals, but the people look a little odd or rubbery to me throughout much of the issue. Rather than reactive, facial expressions seem overreactive, and there are some crazy-eyed looks that to me feel a little goofy in the real-world sequence. Darla is adorable when she meets Tawky Tawny (naturally), but she even has a few moments where her face is a bit out of kilter. Halfway through, the art changes. Gone are the rubbery faces to be replaced with a different kind of feel in the lines and inking. This also covers the transition into the Darklands, and I like this style for that a lot.

From an adventure that started out seeming light-hearted and fun, Shazam! #7 takes a sharp twist into danger. I like that things are actually settling into a plot, rather than feeling like just a goofy whirlwind tour of all that the Magiclands have to offer.

With Dr. Sivana and Mr. Mind at the wheel, all roads lead to the Darklands