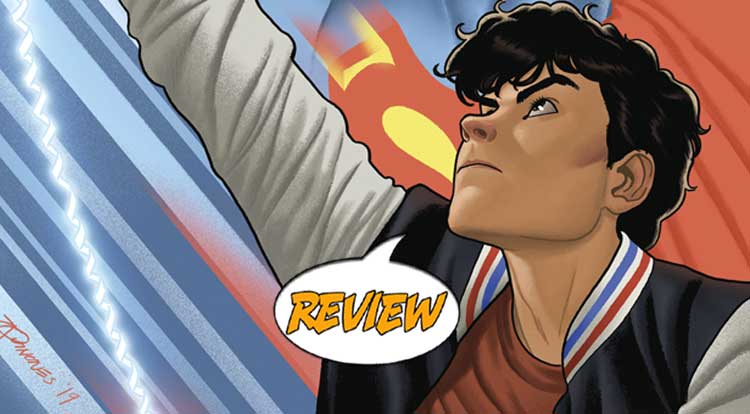 Everyone in Metropolis was transformed by the H-Dial!  Now what?  Your Major Spoilers review of Dial H For Hero #7 awaits! Previously in Dial H For Hero:  What happened when Metropolis became the city of a thousand heroes?  Get the inside story through the eyes of the ordinary people transformed by the powerful H-Dial into heroes you’ve never seen before!

CITY OF A THOUSAND HEROES

After last issue’s mass-empowerment, engineered by the wicked Mister Thunderbolt, we jump back a few minutes for the beginning of this issue’s story. We meet Sir Prize, whose not-so-cool boyfriend always makes cutting remarks about his shortcomings, coming to terms not only with his bad relationship, but with himself. Then it’s Phantasma’s turn in the spotlight, using her Spectre-esque powers to extract a little justice from the soulless world of corporate medicine-for-profit. Then, it’s on to Lucy, The Monster-Hunter, whose focus on vengeance over all else proves her undoing. Finally, it’s the lovely Guardian Angel, who protects Metropolis so selflessly that she gets the attention of Futuristic Detective Flamingo, who unravels the mystery of the Sailor-Moon-style hero with… interesting results. All of this is overseen by Robby Reed, who wonders if any of these wonderful heroes could be his legacy, before sadly realizing it will always be the creation of Mister Thunderbolt that marks his life and times, hinting at the origins of the pointy-headed villain (which will be revealed next time!)

WE HAVE A BIBBO SIGHTING!

Because this comic was initially solicited as six issues, then expanded to twelve, I wondered what this book was going to end up being. Honestly, Humphries and company had a hard row to hoe, as anything that didn’t feel like it continued the story could end up feeling like “filler”, but the end of last issue provided quite a bit of closure already. This issue’s anthology nature works for me, examining how the H-Dial always returns you to normal after your hour of power, but doesn’t leave anyone unchanged, and the different takes on “what I’d do with super-powers” make for interesting stories. Much like last issue’s appearance of “Frank”, a thinly-veiled violent pastiche of Batman-by-Frank-Miller, the grimdark characters come out the worst here, but rather than feel cruel, it makes the hopeful bits that much more uplifting. With this many artists in play (one team for each chapter, there are a lot of places where things could fall apart, but the structure of the story makes it all work (and Oeming’s chapter stands out as excellent among the very good.)

BOTTOM LINE: A TRANSITIONAL ISSUE, BUT A FUN CHANGE OF PACE

As a fan of the ideal that this book is trying to get across, I love the concept of Super-Miguel, the use of different real comic styles, genres and artists to define the new heroes, and especially the reveal of Guardian Angel’s true secret self, meaning that Dial H For Hero #7 gets a well-deserved 4.5 out of 5 stars overall from me. It combines the metaphysical tone of the 2011 relaunch with the goofy, kid-friendly Silver Age original Dial H, and does so with a compelling cast and some truly creative superhero identities, and I recommend this comic to anyone who wants to balance their dark vengeance with a little daylight heroism.

Several side-trips, all of which tap into the wish-fullfillment core of Dial H, with a gang of talented artists... What's not to like?