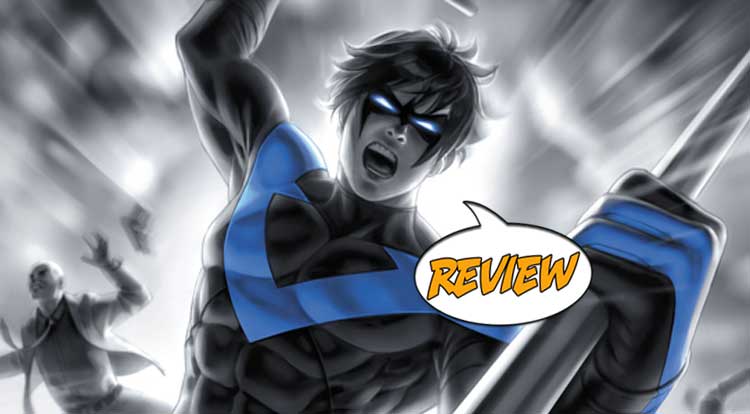 The Year of The Villain hits Blüdhaven!  Can Ric Grayson stem the tide?  Your Major Spoilers review of Nightwing #64 awaits! Previously in Nightwing:  Blüdhaven explodes in violence as a riot erupts in the streets.  Ric can’t face this alone, so he’ll have to enlist the support of the Nightwings.  Meanwhile, Talon has taken Bea captive to lure Ric into his grasp and reintroduce him (for the first time, in Ric’s memory, anyway) to the Court of Owls!

A CITY IN FLAMES

The world is going to hell, and the city of Blüdhaven is going faster than most, which is why the Prodigal Bar is lit by candles and entirely empty save for one unnerving patron who wants to interrogate Bea Bennet about her relationship with Ric Grayson.  Before he can get the information he wants, though, the rioters break through and try to set the place on fire, only to have the strange man disappear into the shadows and start throwing knives.  Dispatching the would-be arsonists, he steps out to reveal himself as… TALON!  Elsewhere, Ric rushes to the emergency room to get help for one of his injured Nightwings, only to find the doctors as overwhelmed as everyone else.  He convinces them to help, but is interrupted by a phone call from Bea, whose cries for help send him into full-on superhero mode.  Leaping aboard a racing fire engine, he crosses the city in fits and starts, nearly getting killed by a crowd here, stealing a motorcycle there, arriving just in time for Bea to tell him that Talon is not only after him, but knows who he used to be.  When Ric snarls that he doesn’t care, Talon chides him that he should, and vows to bring Ric into the Court of Owls once and for all.

I don’t know why Talon calls Nightwing his son, I still don’t really know much about the Nightwing squad (and this is several issues into the story, mind you) and this issue doesn’t really make any effort to explain who or what Talon’s deal is all about, which doesn’t really drag me into the story.  Add in some truly leaden dialogue (“You’re lucky our generator is working, or we wouldn’t have power!” is pretty awful) and a lot of teeth-gritting from our protagonist, and it could have been a complete disaster.  Fortunately, though the writing slips a few gears, the art is quite good throughout the issue, including a couple of big showoff moments for Nightwing (leaping onto a speeding truck, followed a bit later by a big ol’ Evel Knievel cycle jump) that keep it all visually interesting.  I’m also happy with the final splash page of Talon attacking, which delivers a lot of information about the character that the scripting sort of fails to reveal.

BOTTOM LINE: I DON’T LIKE THIS, BUT IT’S NOT OBJECTIVELY BAD

The main thrust of the issue is the attraction of Ric to Bea, his latest love interest, and that at least works, though I’m not entirely sure about his gruff assessment that she’s the only thing in his world that he cares about or is worth worrying over.  It’s a very 90s motivation, leaving Nightwing #64 a muddled reading experience with more story misses than hits, saved by a solid art job and a strong cliffhanger ending, leading to a still better-than-average 3 out of 5 stars overall.  There are rumors that the ‘Ric’ era may be ending, and while I’m not particularly invested in Nightwing with or without the amnesia/head trauma angle, I think this story has to go down as an experiment that didn’t succeed.

Overwrought and not my style, but not a terrible comic, thanks mostly to impressive art.