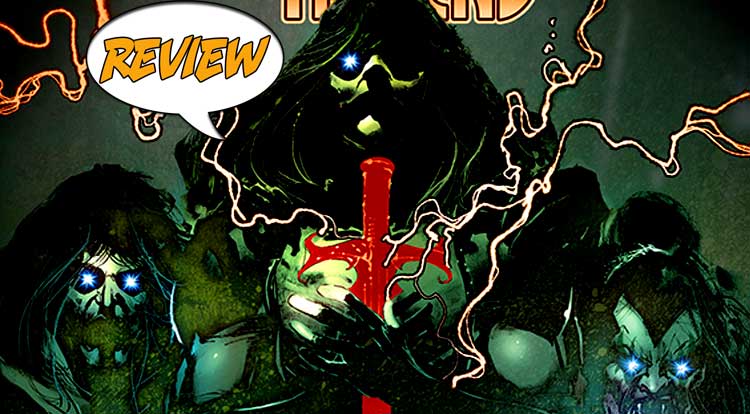 The afterlife isn’t all it’s cracked up to be.  Your Major Spoilers review of KISS: The End #5 awaits! Previously in KISS: The End:  Jay and Mania’s time-hopping, death-defying, rock’n’rolling adventure comes to its epic conclusion!  Will they be able to get the Sword of Immortality back from KISS and return it before Jay is trapped in the Waste Land forever?

This issue begins with a literall fall from grace, as KISS and their new friend Jay make the terrifying drop through time and space into the underworld,  landing on the plains of Hell itself.  Before they can gain their bearings, they’re dragged away by winged demons to visit the devil himself in the heart of The Waste Lands.  Before Jay’s soul is forfeit, however, the angel Lofiel (because she’s worth it) and legendary bluesman Robert Johnson arrive to barter for his continued existence.  The devil’s price is some of that hot rock ‘n roll music that he’s heard so much about, leading to a double-page spread of KISS in concert for the king of the underworld.  A deal is struck and jay returns the Sword of Immortality… only to be run through!  But rather than the final deception, it’s actually a happy ending, as he awakens on Earth, with his love, the girl called Mania, who wants him to get ready for the KISS concert!

And you won’t believe who the opening act is.

A CUTE ENDING, BUT FEELS A BIT SLIGHT

I’ll be honest with you: This issue feels a little bit flippant in it’s sense of closure, as everything just sort of rolls downhill until it ends.  That said, it’s not necessarily a bad issue, just a predictable one.  The fact that the deal with the Devil involves taking him to Tokyo as the opening act for KISS is chuckle-worthy (and his giving control of the afterlife to Robert Johnson is satisfying) but all in all, this issue doesn’t really build up the stakes or emphasize the strangeness of a rock band negotiating with the king of the afterlife.  Of course, they titular band doesn’t really say or do much other than rock out in these pages, either, as the story focuses mostly on young dirtbag Jay and his love of a girl who turns out to be the devil’s daughter.  I do enjoy the art of Edu Menna a lot throughout this issue, with its overtones of Francesco Francavilla and Alex Toth, especially in its depiction of the Demon and company.  (Interestingly, only Gene is identified by name, making me wonder which KISS members we’re looking at here.)  The devil’s contented smile while listening to the strains of good ol’ fashioned rock is itself worth the price of admission.

There are a lot of threads to resolve here, and the story makes sure to do so, even if it sort of seems to skimp on the detail or suspense, leaving KISS: The End #5 as a slightly predictable but well-drawn and still engaging final chapter, which may be leading to a new era of the band, earning 3 out of 5 stars overall.  If you’re a fan of this book (or of stories that emulate the old Chaos! Comics ouvre), this comic should be right up your alley.

Not particularly surprising in the end, but it's well-drawn and has a bit of a love story.