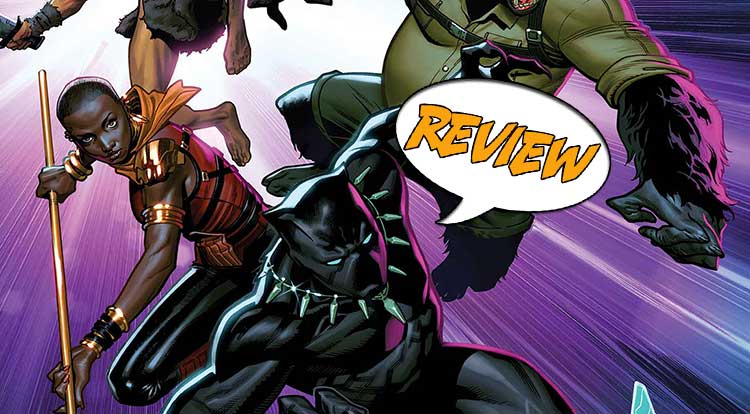 Black Panther and the Agents of Wakanda #1 Review

S.H.I.E.L.D. may be no more, but that doesn’t mean the heroes of the Marvel Universe are without support. Rising from the ashes of War of the Realms, BLACK PANTHER AND THE AGENTS OF WAKANDA #1, from Marvel Comics. BLACK PANTHER AND THE AGENTS OF WAKANDA #1

Previously in Black Panther and the Agents of Wakanda: Having already been put to the test against Namor, a vampire civil war, and the War of the Realms, T’Challa and Director Okoye are beginning to branch out with their Agents of Wakanda. But the teams are made up of a unique and diverse cast of players. Can they all get along to get the mission completed?

Years S.H.I.E.L.D. may be gone, but remnants of their legacy can be found, of you know where to look. A group of mercenaries and technologically focused thieves who call themselves The Scavengers has located a horde of experimental weaponry once owned by the spy organization, and they are in Miami to get their hands on it. But as luck would have it, Wakanda agents Wasp (Janet Van Dye) and Man-Wolf (John Jameson III) are on the scene to insure they do not meet their goal. As Wasp takes a direct approach against the crooks, Jameson is supposed to give her support from a modified flying car. However, he is under the impression Wasp needs his assistance, an impression which leads to his being shot from behind by a female member of the Scavengers. Luckily for him the uniform he is wearing is top of the line Wakandan tech, Unfortunately for him, the hot triggers his transformation into Man-Wolf, a lycanthrope of the cosmic variety, he nearly tears the head off his attacker being brought to his senses by Wasp. The duo have subdued their targets, and Director Okoye has arrived with a Wakandan Helicarrier to pick them up. But the conflict isn’t over. Janet is not happy having to work with Jameson and his highly irritable alter-ego, and she makes her opinion known. Matters of staffing, however, are handled by T’Challa, and he has his reason for everyone he has chosen.

There is no rest for the wicked however. While Jameson goes in for more testing, Wasp and Agent Fat Cobra (Yes! THAT Fat Cobra) have been summoned to a briefing. It seems that before being taken off line by Gorilla-Mana and Broo for maintenance, the Wakandan Satellite Array identified some strange readings around a small town in Oklahoma. King T’Challa has decided to lead Wasp, Fat Cobra, and Okoye into the area to investigate. Instead of a quiet little town, they find a town under siege by what seems to be monsters. The situation is dire, as it also marks the return of an old frenemy that could be the end of them all.

Marvel Comics has been taking a lot of chances with mixing up there titles, and it really seems to be starting to pay off. Instead of the same old “new” versions of old titles, we get remixes of titles, such as Black Panther and the Agents of Wakanda. This title is one which I was not expecting to see, much less enjoy, and the cast of agents is one that makes me look forward to seeing what writer Jim Zub (Avengers, Iron Man) can spin out of the madness.

And madness it seems. Zub starts us off with what seems to be an average milk run and then throws us into a possible inter-dimensional conflict, and does it as smoothly as turning the page. There is not a lot of exposition, not a lot of set-up, you learn what you need to know while the adventure unfolds. No information dump here, it’s fast running action that catches you up as you go and gives you enough hints to understand without spelling it out. Zub is giving us good, clean writing that thrills.

With Lan Medina (Silver Surfer, Venom) serving up the art work, you get a visual experience which balances that find line between realistic and fantasy. His anatomy is spot on, his composition is to be admired, and his backgrounds anchor it all and give it a base. Add the even and vibrant colors of Marcio Menyz (Champions, Fantastic Four) and it is a solid winner

I really was not sure what to expect with this title. I mean, Black Panther replacing S.H.I.E.L.D. with his own group? Oddball characters like Gorilla-Man and Kazar on the roster? It won’t work, but here’s the surprise, it does. It is the very unpredictability of the characters which set your toes and wonder what is going to happen next. The last page reveal? Never would have seen it coming, but it fits in this title.

Black Panther And The Agents of Wakanda #1 makes a solid statement on why it should exist with a highly entertaining issue that will have you waiting expectantly for the next swerve.

Black Panther and the Agents of Wakanda #1

Black Panther And The Agents of Wakanda #1 is a great example of what can be done when you break the box down and build something new.