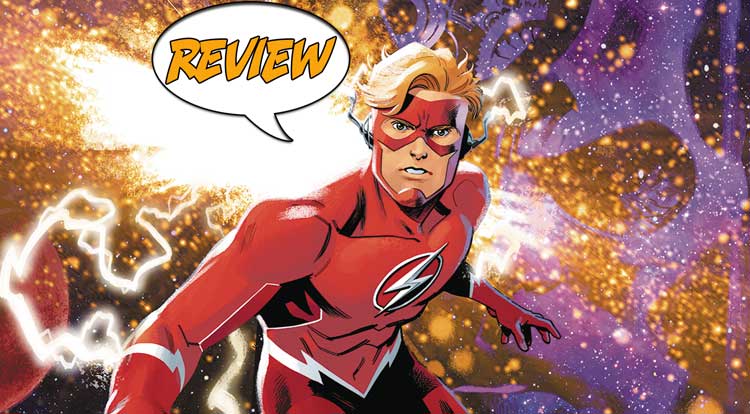 His name is Wally West, and he’s the fastest prisoner alive… Your Major Spoilers review of Flash Forward #1 awaits! Previously in Flash Forward: His name is Wally West-and he was the Fastest Man Alive… until the Multiverse was rewritten without him or his family in it. Though Wally returned and tried to make it work, the damage was done. After a terrible tragedy, can even a Flash find redemption in a cosmos that has fought so hard to destroy him?

THE DARK MULTIVERSE IS RISING

This issue begins in the Dark Multiverse, where Tempus Fuginaut (or A Tempus Fuginaut, I’m not 100% clear how they work, other than being a riff on The Watcher) is horrified to find a tide of darkness that threatens to breach the mainstream realities and plunge all the world of the DC Universe into perpetual blackness. In an act of desperation, he seeks out one being to stem the tide, as we cut to Wally West, trapped in a cell in Blackgate Prison, his super-speed powers dampened, but his super-speed mind still racing. We see a flashback to his time in Sanctuary, including some bonding with Roy “Arsenal” Harper, who died because of his loss of control. Worse still, his worst enemies are at Blackgate, leading to unpleasant run-ins with Murmur, Double-Down, Tarpit and Girder (all of whom have one interesting thing in common, as fans of our ‘Flashback’ podcast will tell you), including nearly being murdered in his cell. Then, the Fuginaut appears, teleports him away, unlocks his full powers and chucks him into the Multiverse, where he lands on Earth-23. Cue the big cliffhanger!

THIS IS ONE UGLY COMIC

As someone who didn’t like ‘Heroes In Crisis’ but has an affection for Wally West, I tried to come into this comic with an open mind, but Brett Booth’s art is VERY unpleasant. Wally’s first appearance is an above-shot, looking down into his room, really highlighting the spidery, elongated limbs of Booth’s signature style. By contrast, Murmur, who is designed to be long, spindly and unnerving, looks almost exactly the same as The Flash, and even characters like grown woman Linda Park have the thin neck of a preteen. The sequence in the Dark Multiverse works a little bit better, but even the Fuginaut has the strange physique, including enlarged hands and head. As for the story, it’s okay, and doesn’t try to immediately gloss over the tragedy of HiC, but Wally’s situation is incredibly grim from top to bottom, to the point where it feels a bit too contrived. Not only is he locked up with his worst enemies, not only is he wracked with guilt for killing one of his oldest friends and a dozen others, but the reporter who comes to visit him is Linda Park, a duplicate of the wife whose loss fueled his breakdown in the first place. The last page reveal of President Superman is a plot hook I might actually want to read about, but the art in this issue is off-putting enough that I don’t know if I will buy #2.

With the meta-statement about too much darkness overtaking the DCU, part of me hopes that these creators are self-aware enough to try and rebuild Wally as a man and a character, but I can’t shake the worry that it’s all going to end with a big old Flash Sacrifice™ to finally remove the troublesome third Flash from the board for whatever Barry Allen has going on next. Flash Forward #1 has the potential to change the onslaught of grimdark horrors, but it’s marred by art that’s not only inappropriate for the tone, but just unpleasant to look at, and it doesn’t quite give me confidence that editorial understands just how unsuccessful ‘Heroes In Crisis’ was, earning a disappointed 1.5 out 5 stars overall.

The problems of 'Heroes In Crisis' compounded by The Dark Multiverse and some truly unpleasant art.