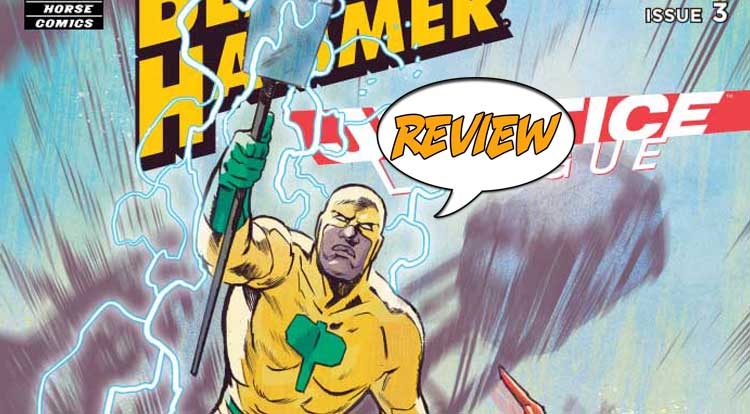 How best to undo a cosmic switcheroo?  And who’s behind it all, anyway?  Your Major Spoilers review of Black Hammer/Justice League: Hammer Of Justice #3 awaits! Previously in Black Hammer/Justice League: Hammer Of Justice: Dropped into the DC universe, the Black Hammer heroes find themselves captured by members of the Justice League who blame them for the cosmic switch.  Meanwhile, on the Black Hammer Farm, the displaced DC heroes search for answers and a way out of their bucolic prison.  But Colonel Weird and the Green Lantern discover that the solution to this riddle may not be so simple….

We open with Abraham Slam, Golden Gail, Barbalien and Madame Dragonfly being interrogated by the remaining members of the Justice League. Hawkgirl is angry at the newcomers, Barbalien is annoyed at the “little green man” form of Martian Manhunter and Gail will not stop hitting on Aquaman. Back at Black Hammer farm, Batman is certain that he has the secret to getting home, only to have Cyborg point out that the vintage components that he’s using simply can’t handle the amount of power the device will require… and that’s when they find a disassembled Talky-Walky. Outside of time and space, in the Para-Zone, Green Lantern and Colonel Weird have come to a fragile peace, and use the timeless portals of the zone to view what really happened when the JLA arrived on the farm “five years ago.” When The Flash takes off at super-speed to what is certainly his doom, Green Lantern acts to try and save him, only to end up marooning all three heroes someplace that Colonel Weird has never seen. Since he can see all that is or ever was, the Colonel tells them ominously that they are well and truly lost. As the issue ends, Golden Gail (having impulsively busted out of a JLA holding cell), encounters Zatanna, who gives her the one thing for which she has been wishing for decades.

“MAYBE YOU JUST NEED TO KNOW HOW TO SAY IT…”

The final page reveal is kind of stunning, even as it makes things much more complicated for everyone involved, especially given Gail’s insistence that she’s just gonna fly off and blend into the DCU. The events on the farm and in the Para-Zone finally give this story some of the forward momentum I had wanted after the slower issue #2, and now that all the players are on the field, things are clearly building towards resolution. (Actually, now that I think of it, this issue’s cover may imply that there’s one more player to come, assuming it’s meant to be representational.) Lemire’s take on the JLA is quite fun here, although they seem to play straight man for the heroes of the farm more than I like, and the scenes in the Para-Zone are an ingenious way to handle exposition. Not only that, they’re beautiful, as Walsh creates strange swirling worlds of non-existent space in ways that evoke classic Kirby and Ditko comics. His Zatanna is likewise amazing, combining the scariness you’d expect from a capital-w Witch with superheroic bearing and a costume that is theatrical but not overly SCHMEXXXY like so many modern Zatannas.

BOTTOM LINE: PICKING UP SOME STEAM

In short, this is a well-written, well-drawn story that once again balances the difficult task of crossing over a partly-parodic story with the characters that helped to inspire it, and does so with aplomb and a real sense of jeopardy and meaning. Black Hammer/Justice League: Hammer Of Justice #3 continues and impressive streak, makes Gail very happy, creeps out Aquaman and earns 4 out of 5 stars overall. It’s definitely a book for fans of improbably crossovers, but will be a good read for hardcore JLA aficionados as well.

Looks great, reads well, and thickens all the plots... Plus Talky-Walky is back!