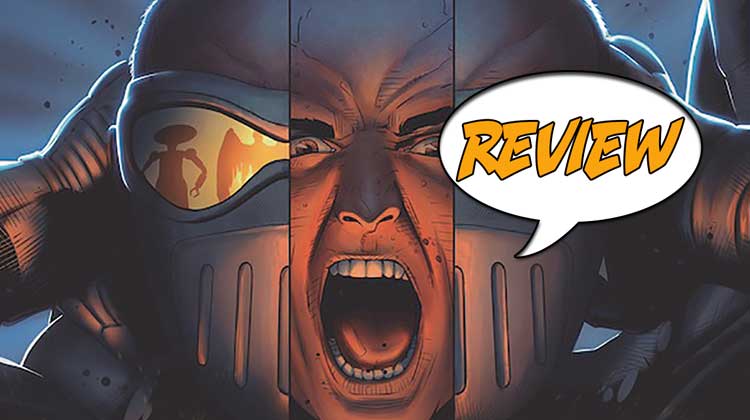 A truck rams its way through the front doors of Abel Raines’ Gyrotech Corp taking down the power grid and enabling his rogue mentor Laird Mason access to the Gyro suit and the C-227 drug.  With his reputation in tatters, can Raines man up and face his nemesis, or will he lose everything on a bonfire of the vanities?  Find out in your Major Spoilers review! Previously in Banjax: Abel Raines came from the poor side of the tracks, but rose to greatness as the hero Gyro, where, with his team, he acted as the protector of his city.  Now, he has been humiliated by his former protégé Laird Mason, who has shown him up in public, resulting in questions being asked about the future success of his company, Gyro Corp.

So, I had to look up what Banjax means, as I’m no longer down with the kids, and Google came through – ‘ruin, incapacitate or break.’  Which just about sums up my experience with Banjax #4 – it certainly ruined my day.

If a comic exists solely to shout at the reader, and display frequent acts of mindless violence, with a threadbare plot and weak attempts at characterisation, then Banjax #4 is that comic in spades.

Abel Raines runs Gyrotech Corporation and his inventions have made the former crime fighting superhero very, very wealthy.  Perhaps too wealthy and comfortable.  For when he refuses to face up to villain Banjax (his former mentor, Laird Mason), Raines’ reputation is shredded and he comes a public laughingstock.  When Mason follows up by ram raiding Gyrotech Corp, and steals the Gyro suit that Raines used to fight crime, Raines’ stalks plummet even further.  Forced out in a board coup, Raines contemplates a comfortable retirement, content to drink booze on a beach instead of fighting fire with fire.  It’s only when his wife Amanda engages in a loooooong conversation to juice him into fighting, that this party gets started.

I’m afraid to say I didn’t enjoy Banjax #4 at all.  Judging by comments elsewhere, I acknowledge I’m in a minority, but you like what you like.  It is a long resounding grunt from start to finish, a brainlessly endless sequence of arguments, shouting, double dealing and action scenes that eventually dissolves into incoherence.  Its reason for being appears solely to appeal to 14-year-old boys astonished the people curse, and are delighted by it.  The violence that permeates the issue becomes rapidly tiresome, and the narrative towards the end collapses.  The issue doesn’t even have the virtue of random nudity to lift its stocks, which I expected given the cartoonish levels of bad language and fighting.

Artist Fabio Alves saves Banjax #4 from being a total car-wreck.  For a comic obsessed with violence and action, his artwork and layouts are perfectly suited.  There’s a great opening scene where the truck bursts into the foyer of Gyrotech Corporation, and we see the guard leaping away from his station in time to avoid becoming roadkill.  You can see the crunching blows and flying bodies leap off the page.  The action is kinetic and non-stop, so purely from an artistic level, Banjax #4 works.  Alves makes good use of flashback scenes to break up the story and add some much-needed depth to proceedings.

Writer Ryland Grant’s efforts at giving Raines some depth are largely clichéd and slow down the issue when he a) confronts himself over his personal failures and b) when his wife Amanda comes home to buck him up into doing what she considers the right thing.  For an action comic, why waste time on stuff like that?  Better use of the page count would’ve been to go for broke in the action stakes, and leave all the chitchat in the delete folder.  And don’t get me started on the appearance of Mick Jagger and Keith Richards watching proceedings on a screen in a bar…

BOTTOM LINE:  NOT WORTH YOUR TIME OR CASH

I hate writing a negative review.  Banjax #4 unfortunately didn’t work for me.  If the readers do like a comic jam-packed with action and flavoured with some salty language, then it may be for them, which is great.  But at the end of the day I have to say it as I see it, and Banjax #4 isn’t very good.  An endless succession of clichés, a narrative that veers into incoherency, it is only saved by some great artwork.

there’s a place for action comics that go from zero to 100 in under three seconds. But they should have heart and decent characterisation. Banjax #4 has precious little of either, and instead relied on some deathless dialog and very thin characterisation to intersperse scenes of breathless action.