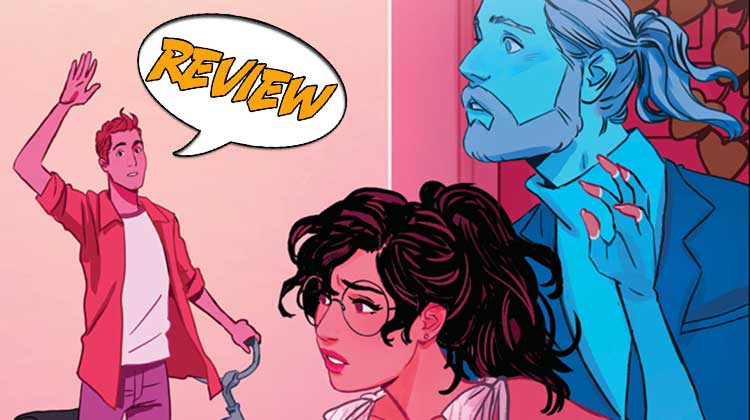 Daphne is suddenly balancing not only school and her personal life, but a new hidden personal life with some local ghosts. Can she keep it together and keep her secret? Find out in Ghosted in L.A. #3! Previously in Ghosted in L.A.: We learn a little bit about Agi’s past and her decision to buy Rycroft Manor to make it into a rooming house for single women. Little did she suspect what it would later become! Daphne starts settling into life with ghosts and is as curious about them as they are of her, but they’re also cautious. And Daphne still has school and her social life. She ends up going on a date with a rude and overbearing guy, who later tries to force himself on her. She pleads with the ghosts to frighten him off, which they do, and almost instantly realizes she’s broken their rules. Agi agrees to give her one more chance, and who should next end up on their doorstep but Ronnie, her ex.

Ghosted in L.A. #3 touches a lot on relationships. It opens again with the history of one of the ghosts, this time Bernard. In a few short pages, we learn that in 1980 he was a lawyer. He was also gay, dating an awesome black man, and was still mostly in the closet, which leads to a painful breakup.

In the present day, Daphne pushes Ronnie out onto the sidewalk, missing texts from Kristi (a nice modern version of the letter that arrives too late). He’s concerned because she had been texting him like mad, and then ghosted him. He’s still worried about her; she’s pissed because he found her by tracking her phone. And because he still dumped her. Their discussion becomes more heated, attracting the attention of Pam and Bernard. And Maurice, who accuses her of upsetting things.

The following day, Daphne is visiting a museum with a class from her college. Bernard materializes next to her, startling her enough that she cries out. (Every ghost has some special talent; Bernard’s is that he can leave the manor.) And he’s convinced that she needs to talk more to Ronnie. In the midst of their discussion, Daphne’s roommate Michelle comes upon her, solidly cementing Daphne’s reputation as being a weirdo. But when things settle down, she texts Ronnie and asks him to come back to Rycroft Manor.

He does want to talk to her. He feels bad that she followed him out here. She braces herself under the assumption that he’s going to tell her about his new girlfriend, but the young woman she saw him with is dating another girl. He’s been trying to tell Daphne that he’s gay. The conversation goes well; they remain friends. It’s honestly very sweet – at least up until the point where the eavesdropping Bernard accidentally reveals himself. At first Ronnie is terrified, but his curiosity overcomes him and they start talking. Daphne’s practical nature takes over and she hauls them off into a side room where, she hopes, Maurice won’t notice.

And speaking of Maurice, he does notice, and he’s not happy. And what’s his deal being here?

The art of Ghosted in L.A. #3 captures the spirit of the book so well. The ghosts that live here come from different time periods, each with their own particular social situations. When we see those scenes from the past, not only are they set off in sepia tones, but care is taken for the look and style of the time. It centers us right away so the dialogue and fill in the details.

This book is all about interactions between characters and their reactions to things thrown their way, and we see the whole range with just a touch of exaggeration here and there to accentuate the humor in awkward moments. Bernard, a keen observer of people, notices that Daphne is very adept at shifting her mood to match others. We’ve seen this already, all the time, through the art. Daphne thinks on her feet, at times sacrificing her dignity, to keep secrets secret and explain things away.

As the story unfolds in Ghosted in L.A. #3, it’s beginning to seem as though these ghosts may have unfinished business here on Earth. Maybe Daphne can help with it – if she can keep her own life in order, that is. I love how friendly she is and how she strives to find things in common with people.

Daphne finds herself sharing her secret…just a little…in order to help her ex, but there may be unintended consequences!