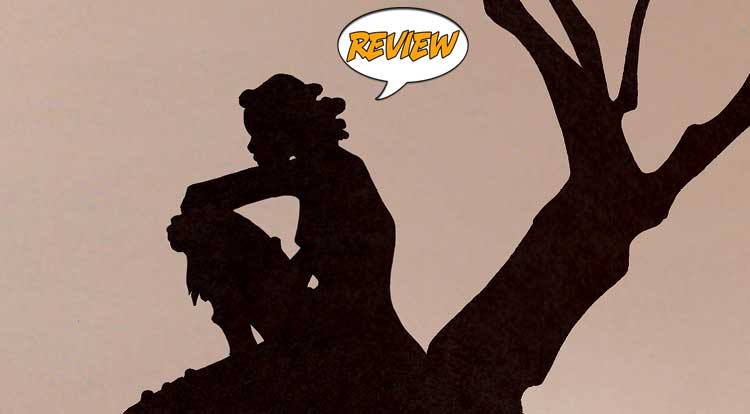 Death, mortality and 30s Hollywood…  Your review of Pretty Deadly: The Rat #1 awaits! Previously in Pretty Deadly: A new chapter in the dark and deadly golden era of Hollywood…

“THIS TOWN IS FULL OF MONSTERS…”

As always, our story opens with Bones Bunny telling Butterfly the tale, in this case a story of loss and mourning as a family of bluejays gathers to cry and call over the body of one of their own. This leads us directly to Los Angeles, in the midst if a driving rainstorm, as the LAPD discovers a body and notifies her only next of kin, Frank, known to many as Conjure-Man. Though he has spent some time faking seances for the jaded folk of the city, the Conjure-Man is a descendant of Sarah Fields, and as such has actual mystical skills. When he discovers his niece’s abandoned apartment, he also finds the film upon which she was working at the time of her death. We see pieces of her narrative, the story of a young girl meeting the Reaper of Hunger, the Reaper of Thirst and the Reaper of Obsession, but it’s all cut short before the climax. The Conjure-Man decides to give up his lies and actually listen to the truth, ringing the bell that that he has kept locked up and calling upon Deathface Ginny, the Reaper of Vengeance, asking her to tell him the truth about what happened to his kin.

A CHANGE IN GENRE

There’s a lot of discussion in comic book reviewing, my own included, that talks about “good jumping-on points” and the difficulty of picking up any given title in mid-stream. The first ten issues of ‘Pretty Deadly’ went from western story to war story, and this one picks up as a noir tale in the seedy streets of Hollywoodland circa Raymond-Chandler-o’clock. As such, Emma Rios’ art is appropriately darker, with more pronounced shadows and use of blacks (especially in Clara’s film, intentionally designed to resemble the silhouette puppetry animation of Lotte Reiniger) and a totally different tone. The story is equally different, featuring the vernacular of the 1930s and a tense conversation between Conjure-Man and a “flatfoot” that wouldn’t feel out of place in a Sam Spade story. Thus, this issue avoids the questions continuity and jumping-on entirely, emerging fully formed as a myth that is entirely readable on its own merits. Not only that, it’s a beautiful comic (even when it’s showing things that aren’t) and the writing is in turn terrifying, ominous and entirely mundane, making for an entirely new but equally fascinating turn for ‘Pretty Deadly.’

If you’re thinking of this as “that one Western comic”, you might be surprised by the contents of this issue, but Pretty Deadly: The Rat #1 kicks off the third volume with style and subtlety, wrapping the iconography what the smart folks call magical realism in the cloak of noir storytelling, adjusting the storytelling and art to match without losing the magic of previous issues, earning 5 out of 5 stars overall. I highly recommend this book to fans of the sequential comic form, as it insists on defying the “rules” of modern comics and just telling a fine, haunting tale of loss and vengeance and death, and it doesn’t suffer one bit from the lack of capes or mutant powers.

A beautiful book across the board.